The American military convoy was almost back to Bagram Airfield in Afghanistan when a vehicle, laden with explosives, careened into it and detonated.

The powerful blast blew up a heavily armored troop carrier, engulfing it in flames. Marines poured out of the other vehicles in the convoy as they battled desperately to save the occupants of the burning carrier, including a Marine reservist — a New York City firefighter — who had once rescued a woman from a burning high-rise apartment.

But all of the American ingenuity that had gone into armoring military vehicles was not enough to stave off the horrendous damage caused by the blast. The fireman, Staff Sgt. Christopher K.A. Slutman, 43, did not beat the fire this time. Two other Marines, also reservists, were also killed, casualties of a two-decade war that has relentlessly continued to extract its toll on American troops.

Now those three Marines are at the center of the latest iteration of the ongoing saga of President Trump and Russia.

American intelligence agencies are investigating whether that car bomb was detonated at the behest of a Russian military agency paying bounties to Afghanistan militia groups for killing American troops. Such a possibility, if true, would be a staggering repudiation of Mr. Trump’s yearslong embrace of President Vladimir V. Putin of Russia. Thus far, there is no conclusive evidence linking the deaths to any kind of Russian bounty.

Perhaps even more significant is that it has taken the debate over possible Russian bounties to bring what happened to Sergeant Slutman and the two others Marines — Sgt. Robert A. Hendriks, 25, and Staff Sgt. Benjamin S. Hines, 31 — to the forefront of American consciousness.

Eighteen years of war have left most Americans largely indifferent to the troops still deploying to Afghanistan. They are still suiting up in camouflage, still saying goodbye to loved ones and still boarding flights from Fayetteville, N.C., to Newark to Frankfurt to Kuwait to Kabul before the final few miles to Bagram.

The mission of the American endeavor in Afghanistan has changed from a war on terror to one meant to “train, advise and assist” Afghan troops. But American forces are still going on patrols in remote areas of the country. The mountain ridges, village roads and poppy fields are as deadly as they were in 2001.

Americans are still fighting, and they are still dying. In 2019, the three Marines were among 22 Americans lost in a long-forgotten war. 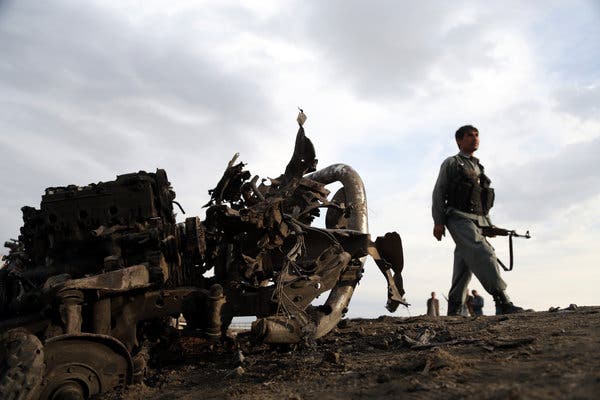 Afghan security forces at the site of the car bomb attack near Bagram Air Base on April 9, 2019.Credit…Rahmat Gul/Associated Press

Interviews with family, friends, service members and military officials paint an all-too-familiar story of the three: young men who, after the Sept. 11, 2001 attacks, sought to serve their country.

They were everyone’s neighbors, and came from hometowns in the Mid-Atlantic and the Northeast. Sergeant Hines was a Star Wars buff. Sergeant Slutman doted on his three daughters. Sergeant Hendriks played lacrosse, was a unionized construction worker and led the way for his brother to join the Marines as well.

They died two weeks before their unit was scheduled to go home, and while American and Taliban negotiators wrestled over details of a proposed peace deal.

For those who loved them, the deaths of the three were excruciating. Recalling the details again, a little more than a year later, is like experiencing it twice, friends and family members said.

The cascade of news stories that followed the disclosure of intelligence reports regarding the Russian bounties has been like “pouring salt on the wound,” said Jason Rina, a friend of Sergeant Slutman, who spent five years working with him at the Cross Bronx Expressway, the name of their New York firehouse.

Erik Hendriks, Sergeant Hendriks’s father, had largely avoided the news in the past year, but said the Russian bounty story scraped raw his pain. “If it does come out as true,’’ he said in an interview, “obviously the heartache would be terrible.”

Before that, the base was fought over by the Northern Alliance and the Taliban during Afghanistan’s brutal civil war. Before that, it was home to the Soviet Union’s 40th Army, the same base where the Kremlin first positioned elite troops in the summer of 1979 as they prepared for their own long war that ended in humiliation and defeat.

One of the first things that NATO troops did after the 2001 invasion was to secure Bagram. By the time the Marines arrived, the airfield was home to thousands of rotating NATO troops, civilian contractors, airmen, military aircraft and hangars.

There were office buildings, barracks and enormous dining facilities. There was a Pizza Hut, a Green Bean coffee cafe and a military shopping facility with hair products and a chance to win a Harley-Davidson motorcycle propped up in the entryway.

But the commercial normalcy belies the fact that Bagram remains in a war zone. Flak jackets are mandatory in some areas, and the sounds of rockets and shelling from Taliban and other insurgents are the background music of the airfield, almost as common as the planes taking off and landing. Multiple suicide bombers have killed dozens of people both outside and inside the base over the years. The near constancy of the attacks at Bagram make them seem almost routine, according to soldiers and Marines who deploy there.

The three Marine reservists were to go on patrols alongside troops from the former Soviet republic of Georgia. By all accounts, it was a quiet six-month deployment.

Sergeant Hendriks, a tall, mustachioed turret gunner, was frequently spotted on base lifting weights in his fatigues and olive T-shirt with the words “All It Takes is All You Got” on the back. He needed to keep in shape. Getting in and out of the armored vehicles involved a lot of contortions because of his height.

He grew up in Locust Valley, N.Y., and was beguiled from an early age by the idea of military service. A beloved uncle and grandfather were veterans, and when one of his best friends joined the Marines, he decided to follow, his father said.

“He came to me in high school in his senior year and asked me to go sign for him,” Mr. Hendriks said. “I said ‘Robbie think about it. You don’t know if you want to have a girlfriend, you don’t know about your future.’”

But his son, stern and straightforward, liked the steady and reliable nature of the military and thought it was a good fit for his orderly personality. “He was a perfectionist,” his father recalled. “He knew details. If you gave him a pencil and said ‘Here, put this somewhere,’ he could find it two years later. If you told Robbie, ‘Do this for the next ten hours, he would do it.”

After graduating from Locust Valley High School in 2012, Sergeant Hendriks joined the Marine Corps Reserves, assigned to the Site Support 2nd Battalion, 25th Marine Regiment in Garden City, NY. He was only 17. The next year, his younger brother Joseph followed suit.

Sergeant Hines, a former football player who was engaged to be married, had always been enthusiastic about physical training, said Lt. Col. Joe Innerst, a retired Marine who started an R.O.T.C. program in the Dallastown Area School District in Pennsylvania back when Sergeant Hines was a high school senior.

He loved to rewatch Star Wars DVDs, his friends said, and considered the series the ideal representation of good versus evil. He also was notoriously late, operating on what his family and friends jokingly referred to as “Ben Time.” He was close friends with the third Marine, Sergeant Slutman, despite their 12-year age difference. He joined other Marines who joking called Sergeant Slutman “Old Man,” friends said.

Sergeant Slutman, who had been a Marine for 14 years by the time he was deployed at Bagram, arrived at the airfield already well-tested and respected after years of fighting fires across the boroughs of New York City. He had received medals for bravery in 2014 after rescuing an unconscious woman from a burning building in the South Bronx. He was constantly challenging other Marines who called him old to try to keep up with him, his friends said. But above all, they said, he adored his three daughters.

The Attack on Their Convoy

That October, a car bomb exploded near a Czech convoy outside of Bagram, wounding five Czech troops. But Thanksgiving and Christmas came and went uneventfully for the Marines. In February the new acting defense secretary, Patrick M. Shanahan, showed up in an all-black outfit, prompting the press to dub him “Dr. Evil.”

The three Marines and the rest of their unit were going out almost daily. Sleep, eat, patrol. The routine has been repeated many thousands of times by 775,000 American troops in Afghanistan for more than 18 years. Sometimes the Marines were on foot and sometimes in convoys as they patrolled the Bagram perimeter.

The Marines knew that every time they left the airfield, their chances of getting hit by an improvised roadside explosive or a car bomb went up exponentially. The road between Kabul and Bagram was especially dangerous, which is why visiting American dignitaries took helicopters between the two locations.

On April 8 — less than two weeks before the Marines were due to return to the U.S. — the three set out on another patrol. Sergeants Slutman, Hendriks and Hines were in the same vehicle.

Just before 4 p.m., as the convoy was approaching an intersection near Bagram, a vehicle slammed into the three Marines’ personnel carrier and detonated. The Taliban quickly claimed responsibility.

Sergeant Slutman’s wife, Shannon, and their daughters at his funeral in New York.Credit…Benjamin Norman for The New York Times

That night, 7,000 miles away in York, Pa., two Marines in dress uniform arrived on the doorstep of Fletcher Slutman, Sergeant Slutman’s father. “Would you like to invite your wife in?” one asked him, after they had settled around the kitchen table. Mr. Slutman shook his head no.

But the Marine nodded his head yes.

Three nights later, on Thursday, April 11, a military plane landed at Dover Air Force Base in Delaware with the remains of the three Marines.

Sergeant Hendriks’s brother Joseph, who had followed his sibling into the Marines and later followed him on a deployment to Afghanistan, accompanied the remains of his brother, who was promoted posthumously to sergeant, back to Dover Air Force Base.

Thirteen days after that, on April 24, friends and family of Sergeant Hines gathered for a memorial service. They talked Star Wars. Then they played an excerpt from “The Imperial March,” the horn-heavy theme made famous as an anthem to Darth Vader.

It was beloved by Sergeant Hines, his friends said.

The investigation into the deaths of the three Marines continues. Although Mr. Trump has dismissed the suspected Russian payments as “fake news,” Congress has begun hearings into the matter. Gen. Mark A. Milley, the chairman of the Joint Chiefs of Staff, said that while the government so far lacks proof that any Russian bounties caused specific military casualties, “we are still looking.”