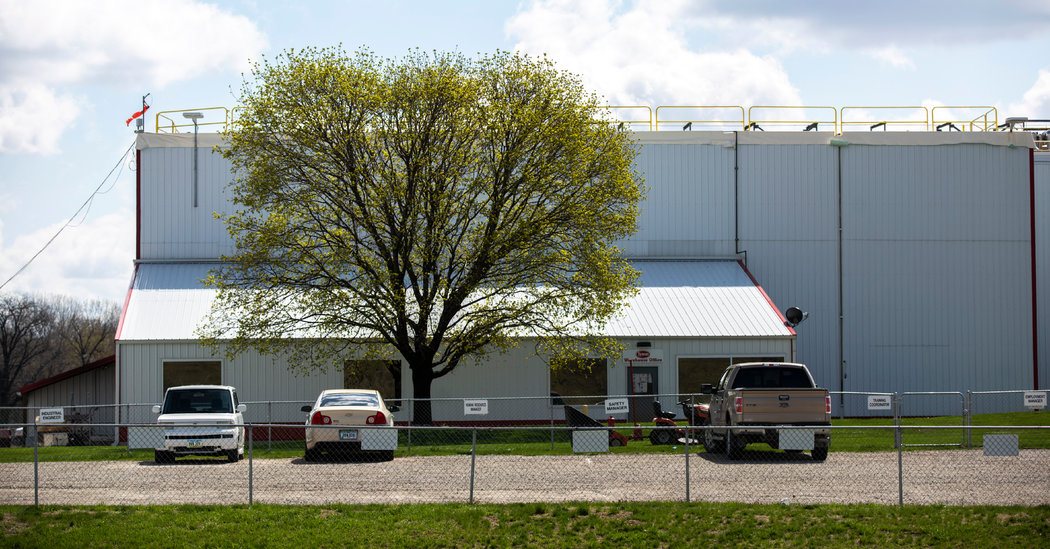 As soon as she heard about a cluster of coronavirus cases at the Tyson pork processing plant on the edge of Columbus Junction, Iowa, Cindy Johnston felt a ripple effect through her small community along the Iowa River.

Ms. Johnston, who manages a Dairy Sweet burgers and ice cream shack, sent home four teenage employees because their parents work at the Tyson plant. Parents of other teenage workers were too afraid of potential infection to let their children report to work at Dairy Sweet. Then, she learned of the death of an employee at the Tyson plant; it was the father of a classmate of her son.

“I’ve lived in this community all my life, and I’ve never seen it so scared,” said Ms. Johnston, who is 52, nearly the same age as the father who died.

Across the country, some big cities on the coasts are starting to experience a leveling off of Covid-19 cases, but a staggering number of small Midwestern towns anchored by meatpacking plants and other factories are finding themselves as new hot spots of the virus.

The new cases are worrying because they come as many officials are contemplating reopening the nation’s businesses. The outbreaks now are raising the prospect of new spread in less populous communities in the middle of the country and complicating these company towns’ debates over when to restart public life.

Tyson Foods closed the plant in Columbus Junction earlier this month. The company announced Wednesday it was closing a plant in Logansport, Ind., as well as a large pork processing plant in Waterloo, Iowa, after calls from public officials to shutter the facility amid a growing outbreak.A Smithfield meatpacking plant in Sioux Falls, S.D., has nearly 1,000 cases tied to its facility. And a JBS pork plant in Worthington, Minn., a Hormel food processing facility in Rochelle, Ill., and a ConAgra food processing plant in Marshall, Mo., are among others that have reported significant outbreaks.

Infections can spread fast in the facilities as employees work side by side and gather in cafeterias or locker rooms. In many rural Midwestern areas, these businesses are often the only large workplaces for miles around.

The new outbreaks have an outsize impact on families, congregations and, in particular, other businesses in communities that are trying to think about reopening as some political leaders in state capitals and in Washington call for the beginnings of a return to economic normalcy.

“It’s going to be a new normal for us,” said Michael Schepp, owner of Helix Wine and Bites, a restaurant in Grand Forks, N.D., where public health officials have traced at least 128 positive cases of the virus to a wind power plant.

Earlier this week, the plant, called LM Wind Power, which is owned by G.E., closed for what it said would be at least two weeks so it could be disinfected. Along with a university and a hospital system, the plant is one of the biggest employers in Grand Forks.

The outbreak was another blow for business owners like Mr. Schepp, who had been scrambling to figure out how the restaurant could reopen its dining room.

“As a city we were in really good shape leading up to that, but it shows you how quickly this thing can change,” he said.

Gov. Doug Burgum of North Dakota, a Republican, has called for a reopening of the economy on May 1. Mr. Schepp hopes that by then he can allow a limited number of patrons in his dining room. But he said he is not sure exactly how that would work. In the meantime, he has been serving wine by the glass and cocktails to-go.

“We’re going to have to reinvent the restaurant industry,” he said.

In Madison, Neb., residents are bracing for a broader spread of the virus after six cases were reported at a Tyson plant on Sunday.

The plant is the biggest workplace around, with Madison residents and commuters among its employees. Some local businesses such as Burrito King, a beloved restaurant, have closed completely. In the community of about 2,400 residents, volunteers have donated floral bouquets and cupcakes to nursing home residents who no longer can receive visitors because of the virus threat, and the fire department has offered to drive by, sirens blaring, the homes of children celebrating birthdays.

Nebraska Gov. Pete Ricketts, a Republican, who has declined to issue a blanket stay-at-home order, has called for a gradual reopening of the economy starting next month. But Madison is planning to take things extra slowly, Al Brandl, the mayor, said.

“We want to just get through this,” he said.

In Columbus Junction, practically everyone in the community of 2,000 residents works at the Tyson plant or knows someone who does. And now, after the outbreak at the plant earlier this month, nearly everyone knows someone who has the virus. Almost 150 workers among the plant’s 1,400 employees have tested positive for the virus. Two employees have died.

The plant looms large over the town, its tentacles reaching a church where sickened employees are among congregants and now in need of prayers and grocery deliveries, and a day care facility that already had seen its numbers shrink and decided to send home children whose parents worked at the plant.

It affected the clients of the veterinary practice of Mike Todd who passes by the Tyson plant on his way to farms to treat large animals, a part of his business he still operates because he can maintain social distancing easily in a barn or pasture.

Mr. Todd is slowly trying to reopen his Louisa Veterinary Clinic. He’s vaccinating puppies to prevent illness. And on Tuesday, he removed a tumor from a dog. He plans to allow for more elective procedures in the days to come.

“We’re just being careful,” he said. “Everything is a risk to some extent.”

On Main Street in Columbus Junction, Five Star Grocery is still open, but Joseph Hu, the owner, is allowing just two people inside at a time. His small store caters to fellow Burmese immigrants who moved to the town to work at the pork plant.

“Now that the virus is here, nobody is shopping,” Mr. Hu said. “A lot of people are scared.”

Across the country, everyone is looking ahead to reopening the economy. Mr. Hu is no different, even though the possibility seems tenuous in the small community that is in the midst of managing such a large outbreak.

The Tyson plant had shut down on April 6, and Mr. Hu said that his optimism was bolstered after he learned that the plant partially reopened this week. Company officials said that the facility had been disinfected and that they were checking employees’ temperatures, installing workstation dividers and requiring face coverings for workers.

Sick employees will be better soon, Mr. Hu predicted, and then they will start shopping again.

The owners of Dairy Sweet, a part-year operation that is about two miles from the Tyson plant, opened two weeks ahead of its usual seasonal schedule after realizing business at their other restaurant, the 92 Roadhouse Bar and Grill, was too scarce to keep it open for carryout, said Ms. Johnston, the Dairy Sweet manager.

Ms. Johnston said she sensed that the community was starting to feel a bit more at ease in recent days. Ms. Johnston has “adopted” a high school senior, a volunteer project to send small gifts to students whose final high school year has been cut short. She offered on Facebook to buy groceries for anyone in need. So far, she has had no takers.

Ms. Johnston is trying to stay healthy. She is downing extra vitamin C and elderberry supplements. Her hands are chapped from washing them so much.

At Dairy Sweet, employees are wearing masks and gloves. They rub credit cards with Clorox wipes before and after handling them. Other than that, the business hasn’t changed much since it first opened in 1956.

It never had a dining room; customers place orders at a pickup window or a drive-through. In that way, Dairy Sweet is one of the few places in town that feels normal. Most days, in fact, business is way up, double its usual, she said.