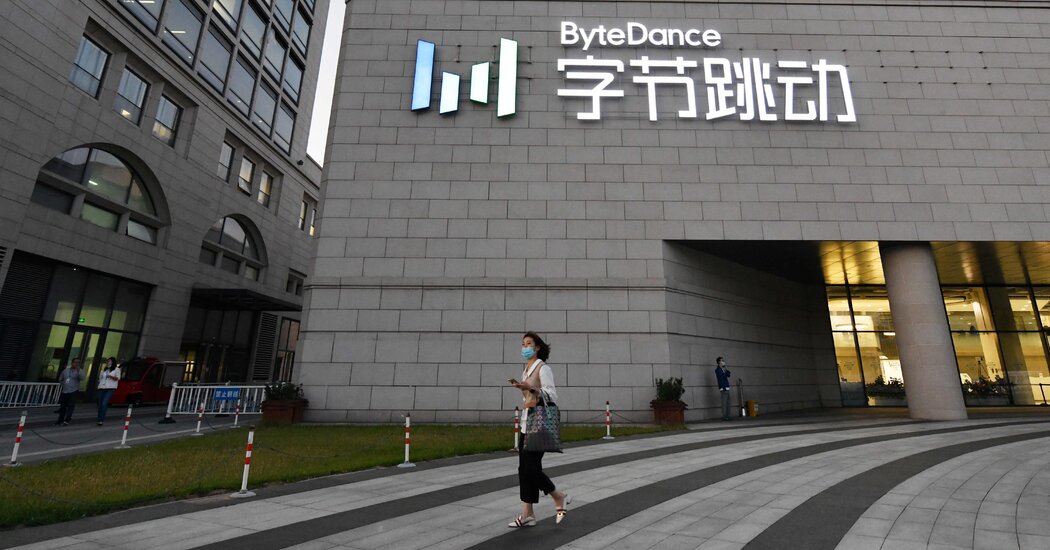 WASHINGTON — The Chinese company that owns TikTok has accepted the Trump administration’s changes to a deal designed to mitigate the White House’s concerns that the popular app poses a national security threat, two people with knowledge of the talks said.

The Treasury Department, which leads a group reviewing the deal for national security purposes, provided TikTok’s owner, ByteDance, with revisions to its proposal on Wednesday, one of the people said. Some of the revisions were intended to address how TikTok’s data and source code would be handled and secured, one of the people said. The two sides have agreed in principle, but are still discussing some technical details, the other person said.

The exact ownership structure of TikTok under the proposed deal is unclear. President Trump and some members of his administration have said ByteDance cannot retain a majority stake in TikTok if their concerns are to be satisfied. Oracle, the Silicon Valley business software maker, is set to be a technology partner for TikTok while taking an ownership stake in the app, but would not own it outright, people with knowledge of the situation have said.

Any resolution on ownership could involve some tricky math. The percentage of TikTok owned by non-American interests depends partly on how officials treat the portion of ByteDance, a privately held company, that is already backed by American investors, one person said.

TikTok would also go public on an American stock market in about a year if the deal went through, the person said. While that plan is not a formal part of the proposal being vetted by the government, it is something the Trump administration is aware of, the person said.

The deal still requires approval from Mr. Trump. As of early Thursday afternoon, the president had not been briefed on it. One person familiar with the deliberations said the meeting had not been scheduled but would happen “soon.”

An executive order signed by Mr. Trump essentially mandates that TikTok strike a deal to sell its U.S. operations by Sunday or risk having all of its commercial transactions halted in the United States. TikTok has became a point of contention between the United States and China, which have increasingly battled over trade, security and tech dominance.

Some Republican lawmakers, such as Senators Marco Rubio of Florida, Thom Tillis of North Carolina and John Cornyn of Texas, have criticized any deal that would leave ByteDance in control of TikTok’s code or algorithms as inadequate in addressing national security concerns. That has raised questions of whether Mr. Trump could face criticism for the Oracle-TikTok proposal while running for re-election.

At a news conference on Wednesday, Mr. Trump said he was “not going to be happy” if ByteDance still owned a majority of TikTok as part of its deal with the government.

While rushing to secure a deal, TikTok is also hunting for a permanent chief executive to replace Kevin Mayer, who resigned in late August, citing the changing political pressures of the role. Vanessa Pappas, the general manager of TikTok in North America, took over in the interim.

Among those whom TikTok has talked to about the job is Kevin Systrom, a founder and former chief executive of Instagram, people briefed on the matter said. Talks are preliminary, and no final decisions have been made, they said.

The parties to a deal expect to name an American chief executive of the new TikTok entity, one person familiar with the matter said.

The drama over TikTok is part of a battle between Washington and Beijing over who will control central aspects of the internet. American officials say that because China has laws that require tech companies to provide the government with access to data, its internet companies pose a national security risk.

The Trump administration’s early efforts focused on the equipment that delivers internet connections around the world, by trying to keep products made by Huawei and ZTE out of American networks and those used by U.S. allies. More recently, it has begun to scrutinize consumer technology companies. The administration forced a Chinese company to sell Grindr, a gay dating app, this year, for example.

In a series of executive orders last month, Mr. Trump made it clear that ByteDance must sell TikTok or face an outright ban of the app. Another executive order threatened to ban WeChat, a messaging platform owned by the Chinese internet giant Tencent.

Beijing responded with new export restrictions that appeared to ban the sale of TikTok’s valuable video recommendation algorithm, a move that cast a shadow over the talks in the United States.