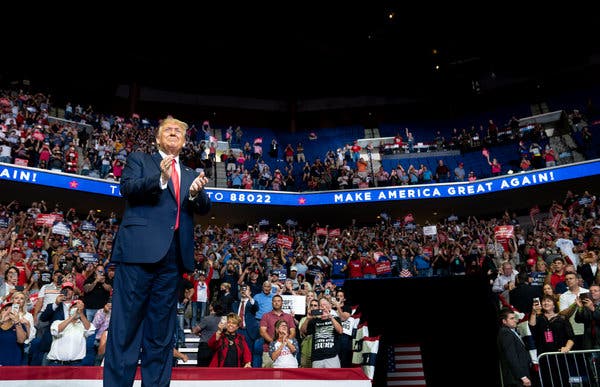 President Trump’s campaign promised huge crowds at his rally in Tulsa, Okla., on Saturday, but it failed to deliver. Hundreds of teenage TikTok users and K-pop fans say they’re at least partially responsible.

Brad Parscale, the chairman of Mr. Trump’s re-election campaign, posted on Twitter on Monday that the campaign had fielded more than one million ticket requests, but reporters at the event noted the attendance was lower than expected. The campaign also canceled planned events outside the rally for an anticipated overflow crowd that did not materialize.

Tim Murtaugh, a spokesman for the Trump campaign, said protesters stopped supporters from entering the rally, held at the BOK Center, which has a 19,000-seat capacity. Reporters present said there were few protests.

TikTok users and fans of Korean pop music groups claimed to have registered potentially hundreds of thousands of tickets for Mr. Trump’s campaign rally as a prank. After the Trump campaign’s official account @TeamTrump posted a tweet asking supporters to register for free tickets using their phones on June 11, K-pop fan accounts began sharing the information with followers, encouraging them to register for the rally — and then not show.

The trend quickly spread on TikTok, where videos with millions of views instructed viewers to do the same, as CNN reported on Tuesday. “Oh no, I signed up for a Trump rally, and I can’t go,” one woman joked, along with a fake cough, in a TikTok posted on June 15.

Thousands of other users posted similar tweets and videos to TikTok that racked up millions of views. Representatives for TikTok did not immediately respond to requests for comment.

“It spread mostly through Alt TikTok — we kept it on the quiet side where people do pranks and a lot of activism,” said the YouTuber Elijah Daniel, 26, who participated in the social media campaign. “K-pop Twitter and Alt TikTok have a good alliance where they spread information amongst each other very quickly. They all know the algorithms and how they can boost videos to get where they want.”

Many users deleted their posts after 24 to 48 hours in order to conceal their plan and keep it from spreading into the mainstream internet. “The majority of people who made them deleted them after the first day because we didn’t want the Trump campaign to catch wind,” Mr. Daniel said. “These kids are smart and they thought of everything.”

Twitter users on Saturday night were quick to declare the social media campaign’s victory. “Actually you just got ROCKED by teens on TikTok,” Representative Alexandria Ocasio-Cortez of New York tweeted in response to Mr. Parscale, who had tweeted that “radical protestors” had “interfered” with attendance.

Steve Schmidt, a longtime Republican strategist added, “The teens of America have struck a savage blow against @realDonaldTrump.”

Mary Jo Laupp, a 51-year-old from Fort Dodge, Iowa, said she had been watching black TikTok users express their frustration about Mr. Trump’s hosting his rally on Juneteenth. (The rally was later moved to June 20.) She “vented” her own anger in a late-night TikTok video on June 11 — and provided a call to action.

“I recommend all of those of us that want to see this 19,000-seat auditorium barely filled or completely empty go reserve tickets now, and leave him standing there alone on the stage,” Ms. Laupp said in the video.

When she checked her phone the next morning, Ms. Laupp said, the video was starting to go viral. It has more than 700,000 likes, she added, and more than two million views.

She said she believed that at least 17,000 tickets were accounted for based on comments she received on her TikTok videos, but added that people reaching out to her said tens of thousands more had been reserved.

Ms. Laupp said she was “overwhelmed” and “stunned” by the possibility that she and the effort she helped inspire might have contributed to the low rally attendance.

“There are teenagers in this country who participated in this little no-show protest, who believe that they can have an impact in their country in the political system even though they’re not old enough to vote right now,” she said.

The effort to deprive Mr. Trump of a large crowd spread from Twitter and TikTok across multiple social media platforms, including Instagram and Snapchat.

Erin Hoffman, an 18-year-old from upstate New York, said she heard from a friend on Instagram about the social media campaign. She then spread it herself via her Snapchat story, and said friends who saw her post told her they were reserving tickets.

“Trump has been actively trying to disenfranchise millions of Americans in so many ways, and to me, this was the protest I was able to perform,” said Ms. Hoffman, who reserved two tickets herself and persuaded one of her parents to nab two more. “He doesn’t deserve the platform he has been given.”

Ms. Laupp said that many of the people who shared her video added commentary encouraging people to procure the tickets with fake names and phone numbers. In the comment section under her own video, TikTok users exchanged advice on how to acquire a Google Voice number or another internet-connected phone line.

“We all know the Trump campaign feeds on data, they are constantly mining these rallies for data,” said Ms. Laupp, who worked on several rallies for Pete Buttigieg’s campaign for the Democratic nomination for president. “Feeding them false data was a bonus. The data they think they have, the data they are collecting from this rally, isn’t accurate.”

She added that several people who took part in her campaign complained that once they signed up for the rally with their real phone numbers, they couldn’t get the Trump campaign to stop texting them and sending them messages.

Mary Garcia, a 19-year-old student from California, said that she used a Google Voice number to sign up for the rally, but that two of her friends who also signed up used their real numbers and had been inundated with texts from the Trump campaign.

Ms. Garcia said she decided to sign up on a whim after seeing Ms. Laupp’s video, but after she saw the Trump campaign boasting about its record-setting ticket numbers she regretted what she had done.

“I feel like it doesn’t even matter if the rally is full or not,” Ms. Garcia said. “They are going to boast about a million tickets being registered, and then they’ll just lie or whatever about how big the audience was.”

K-pop stans have been getting increasingly involved in American politics in recent months. After the Trump campaign solicited messages for the president’s birthday on June 8, K-pop stans submitted a stream of prank messages. And earlier in June, when the Dallas Police Department asked citizens to submit videos of suspicious or illegal activity through a dedicated app, K-pop Twitter claimed credit for crashing the app by uploading thousands of “fancam” videos.

They also reclaimed the #WhiteLivesMatter hashtag in May, by spamming it with endless K- pop videos, in hopes to make it harder for white supremacists and sympathizers to find one another and communicate their messaging.

Whether or not the prank to call in false tickets was the reason for the empty upper rafters at Mr. Trump’s rally, teenagers online celebrated. On Twitter, several accounts tweeted, “best senior prank ever.”