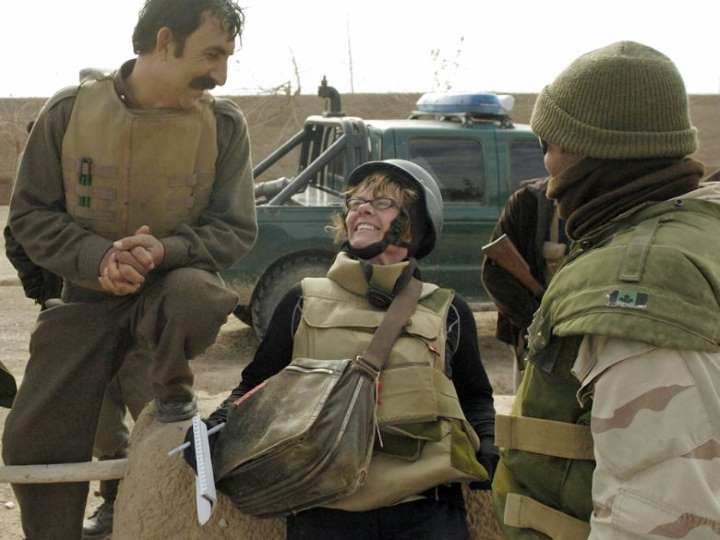 As I wrote a few weeks ago, since the dawn of 2020 I have felt suffused in death. The latest is hard to take for any reader of first-rate reporting and analysis. Christie Blatchford, an indispensable colleague of mine from the glory days of The National Post, died last Wednesday at Princess Margaret Hospital in Toronto after a very short battle with lung cancer.

In 1998, to launch the Post, Conrad Black and Ken Whyte put together the best team ever assembled for any Canadian newspaper. It was my last great journalistic adventure, and, although it was only twenty years ago, it already belongs to a lost time: an era when individual writers sold papers, when people still made a point of swinging by the corner newsstand in the morning and coughing up their 75 cents because there was a big trial on – a serial killer or sex fiend, an honor killing – and the only courtroom observer they wanted to read was Blatch. It is easy (as I can attest) to be a star columnist, but far rarer to be, as Christie was, a star reporter – the one who made heads turn when she entered a courtroom because her presence signified that the trial was a big deal. That world is dead: the big press conglomerates bungled their transition to the Internet, and made the same mistake as all those railroad companies at the dawn of manned flight who failed to grasp they were in the transit business rather than the train business.

Christie came from the hard, cold, isolated mining town of Rouyn-Noranda, where her dad ran the hockey rink. Over the decades her editors would jet her to New York and Paris, but she never broke faith with the great Canadian hinterland. She was, for example, quite rightly affronted when a preening twerp of a prime minister killed the 2017 sesquicentennial stone dead by making it a parade of joyless virtue-signaling indicting a noble nation’s entire inheritance. As Blatch noted, half-a-million were expected to attend the festivities on Parliament Hill; instead, fewer than 25,000 showed up:

Canadians know precisely what to expect on such occasions — paeans to equity, refrains praising the collective modern tolerance (but damning the oppression that went before and lingers on), rote odes to all that is indigenous — and thought better of it.

Better a few days at a cottage or camp, a swim in a still-cold lake, a beer on the dock with family and friends, the Hip blasting all day long.

Christie was raised in a rougher, rawer Canada, and embodied a rougher, rawer media. Somewhere or other in recent days, I saw a picture of her in her Toronto Sun lifestyle-column days, blonde-tressed and snub-nosed, curled up in bed like an honorary Sunshine Girl. In my mind’s eye, I still see her like that, because that’s who she was when I first started reading her. By the time we were comrades at the Post, she’d long since dropped that look for a pudding-basin Noranda barber-shop cut, startling triangular specs, and behind them an intense glare that I like to think came from peering intently at distant judges down the other end of the courtroom lest, amid their semi-audible mumbles, they were attempting to pull a fast one on the public and its right to open justice being seen to be done, in Lord Hewart’s famous formulation. She was not especially deferential to red robes: The last time I attended a trial with her, she repeatedly bellowed from the back that the judge should speak up, and, when the crowd proved too large for the public benches, demanded we be allowed to move forward and sit in unused counsel’s chairs and the jury seats. She won that one.

Christie presented herself as a kind of Xtreme Sports version of The Front Page – originally written, of course, by two hard-boiled Chicago reporters. Among the enervated and antiseptic Windy City media of more recent times, Blatch and I found ourselves in a downtown courtroom covering the outrageous trial of our old boss Conrad Black. During one short recess, she was on her cellphone reading to some long-distance chum some observation of mine. As I passed by, she said, “Don’t you just want to give him the world’s best b***job for writing a sentence like that?” She appreciated a well-turned phrase, although not, as a practical matter, to the extent suggested. But she had learned her trade in a smoke-filled newsroom with a well-stocked beer fridge, and she thought coarse vulgar newshounds preferable to pompous high priests of a ludicrously self-regarding closed guild. On the Post‘s first birthday she wrote:

That dinner, attended by [editor Ken] Whyte and [deputy editor Martin] Newland both, was winding to a bit of a tame, and prematurely early, close. We were all dog-tired, me included, but I had been raised right at the old Sun, and on the spur of the moment, in an effort to rally (or frighten) the troops, my sweater rose of its own accord, and I flashed the crowd.

[Alison] Uncles giggled, but the boys barely appeared to notice, and I was feeling fairly dispirited.

The next morning, I had an e-mail waiting from Mr Newland.

Such conduct is not to everyone’s taste. But, in an age when no prudent man lets himself be alone with a female colleague, it was somehow comforting to know that she was more or less the only woman in the global media who would never #MeToo you. When CBC poster boy Jian Ghomeishi found himself on trial for allegedly punching the lights out of various girlfriends, Blatch and Barbara Amiel (a bird of a very different feather) were the only two pundits to take the view that he was not guilty. Contrarianism is a well-established Fleet Street virtue, and, for a complacent columnist, there is something to be said for it merely as a mental exercise. But that’s not why Christie took her position: She had been around long enough to know that justice and the reporting thereof are largely bunk, and so she was always attentive to the evidence. As the great herd of independent minds was stampeding off after the agreed narrative, Blatch was secure enough to be entirely relaxed about finding herself a minority of one.

Throughout it all, she had an eye for the telling detail. A decade ago, three Afghan sisters and an aunt were found dead in the Rideau Canal at Kingston, Ontario, victims of a “midnight driving lesson” that had gone “tragically wrong”, as the halfwit Canadian press first reported it. It was, obviously, an honor killing – by the girls’ father, mother and brother, the first of whom dismissed his daughters as whores and urged the Devil to “sh*t on their graves”. Christie opened one of her court reports with a detail that appalled her: There were ten members of the Shafia family staying in two rooms at a nearby motel. The morning after the murders, Mr Shafia missed the 11am checkout and decided to retain both rooms for another night. He then attempted to argue the innkeeper down to a reduced rate on the grounds that, for the second day, there would only be six staying in the rooms.

The discovery of the four bodies had not yet been announced.

Christie Blatchford was a writer of surpassing integrity: She did not like Jian Ghomeishi, but the evidence against him was insufficient. Conversely, she felt the inconceivable horror of the Shafia girls’ final moments, and the awful inhumanity of their killer attempting to get a discount on the now less populated hotel accommodations.

Unlike most American cities, with one legacy broadsheet and one legacy tabloid or (worse) a grey Gannett monodaily, Toronto was a competitive market in which (as in Fleet Street) a readable writer could be poached back and forth up the pay scale. At twenty-one, Christie was writing for The Globe and Mail, eventually as Canada’s first female sports columnist, until some jackanapes of a sub-editor monkeyed with her copy and she jumped to The Toronto Star, then to The Toronto Sun, then to the Post…

Last year, she became the second recipient of the George Jonas Award. I was privileged to be the first, and I can’t confidently say they got the order right. But I was honored to share the Post‘s pages with her, and I am sad that I shall never again read a new column by Christie Blatchford. She was the best at what she did, and a great bawdy, ribald and principled presence in the Canadian press for half a century.

The Biden DOJ’s Targeting of Rudy Giuliani Could Backfire Spectacularly