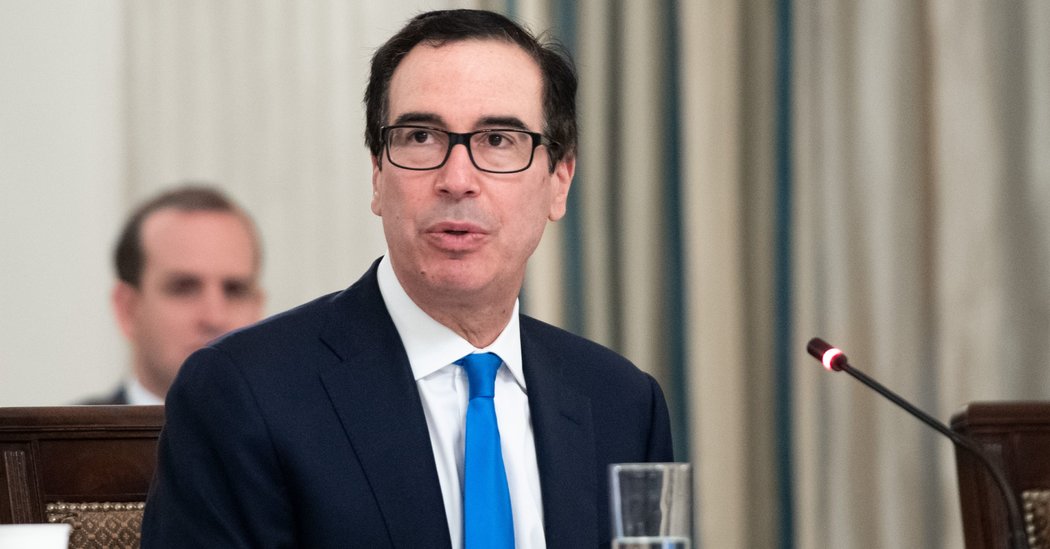 WASHINGTON — Bowing to political pressure, the Trump administration said on Friday evening that it would disclose borrower information for recipients of millions of small-business loans through the $660 billion Paycheck Protection Program.

The decision is a reversal for the administration, which had closely guarded the information and argued that private businesses should not have their names or the amount of money that they took from the federal government disclosed. The move comes as Democrats had seized on the secrecy surrounding the program to suggest that the bailout was an example of the Trump administration engaging in corporate cronyism.

The new disclosures will apply to loans of more than $150,000. The information will be broken down into five loan ranges, topping out at the maximum amount of $10 million. The Small Business Administration will release business names, addresses, demographic data and jobs supported.

The Treasury Department, which jointly administers the loan program with the S.B.A., did not say when the new information would be made public; however, some of the demographic data will be included in loan forgiveness applications, which might not be submitted for months.

Treasury officials said on Friday that the decision, which has bipartisan support, would provide transparency while maintaining protection for small businesses. It does not appear that any additional legislation will be required, and the Treasury maintains that the law did not mandate the disclosure of additional data.

Thus far, the administration has been providing only information about loan approval totals and lenders, along with basic geographic and industry information. No data specific to companies has been released.

“I am pleased that we have been able to reach a bipartisan agreement on disclosure which will strike the appropriate balance of providing public transparency, while protecting the payroll and personal income information of small businesses, sole proprietors, and independent contractors,” Treasury Secretary Steven Mnuchin said in a statement.

Jovita Carranza, the S.B.A. administrator, noted that the disclosures would still protect personally identifiable information of entrepreneurs, such as a home addresses associated with the business loans.

The Treasury Department said that the detailed disclosures would apply to about 75 percent the loans that have been approved. Information about loans that are worth less than $150,000 will be released in aggregate by ZIP code, industry, business type and demographics. Many of the businesses that took smaller loans are sole proprietors and Treasury officials did not want information such as home addresses or other personal details for those business owners to be published.

Mr. Mnuchin told a Senate committee this month that he did not believe the loan information should be released because it was “proprietary” and confidential. That set off outrage from Democrats and frustration from Republicans, who believed that more data was necessary to provide oversight over the centerpiece of the biggest government bailout in American history.

Earlier this week, House Democrats initiated an investigation into the loan program and called for the release of the borrower information. The Treasury Department has also faced complaints from a panel of inspectors general about failing to be sufficiently transparent about how the bailout money is being spent.

“The administration should release the names of all P.P.P. borrowers — as the S.B.A. routinely does for similar loan programs,” the lawmakers wrote in a letter to the heads of the Treasury Department and the S.B.A.

Mr. Mnuchin signaled on Monday that he was prepared to change course and he engaged in discussions with Senator Marco Rubio, Republican of Florida and the chairman of the Senate’s small-business committee, to find a compromise solution.

“The American people deserve to know how effective the P.P.P. was in protecting our nation’s small businesses and the tens of millions of Americans they employ,” he said in a statement. “I also understand the very real concern that many small-business owners have with regard to disclosing proprietary information.”

Private businesses have been fearful that if data is released about the loans, their confidential information will be made public and they could be vulnerable to hostile takeovers. They have also been concerned that their employees could be more susceptible to poaching if competitors learn what they are paying their workers.

The Treasury Department has not provided company-specific information, but some publicly traded firms voluntarily disclosed that they had taken a loan — in some cases prompting stiff blowback. Many of those firms, like Shake Shack and Ruth’s Hospitality, returned the money amid steep criticism.

That has dampened enthusiasm for revealing participation in the government program.

Disclosure of loans “could hurt business owners from a credit standpoint, from a competition standpoint and even from a P.R. standpoint,” Kevin Kuhlman, senior director of government relations at the National Federation of Independent Business, said in an interview this week.

Mr. Kuhlman said businesses were fearful that taking P.P.P. loans was becoming a “public shaming exercise” that would be exacerbated if borrower information was released.

The White House and Congress have been discussing whether to renew the lending program, which has gone through several changes after it was created as part of the $2.2 trillion economic stabilization package. Complaints about the lack of transparency surrounding the program threatened to become an obstacle in an upcoming round of stimulus legislation.

According to the latest figures, 4.5 million loans totaling $512 billion have been approved.