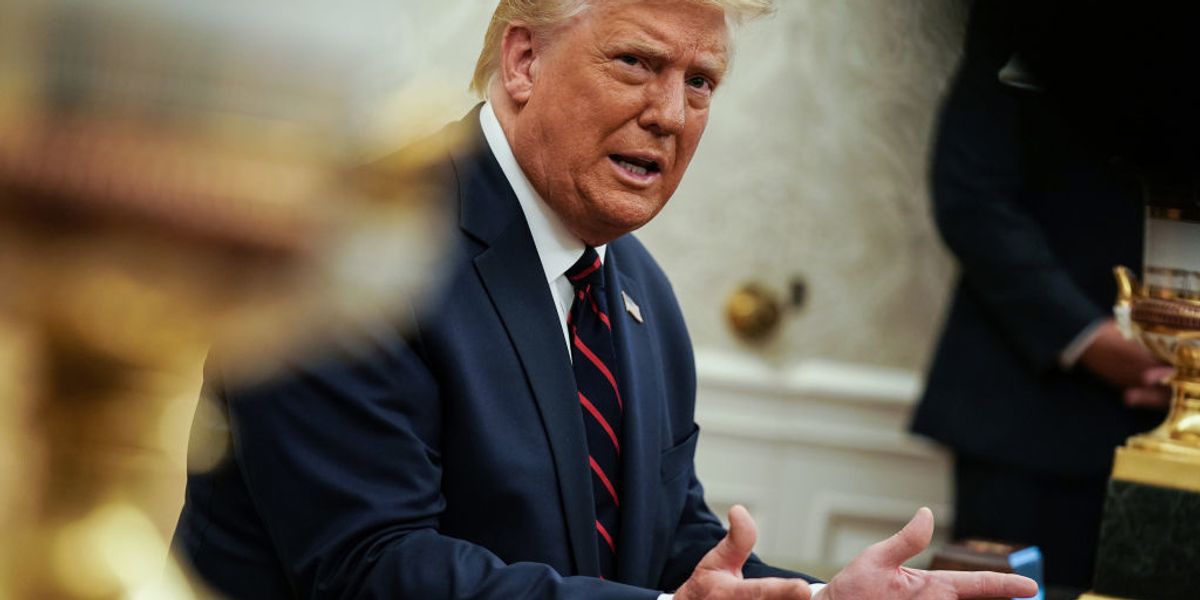 President Donald Trump accused Democrats and the mainstream media of “denigrating” a potential coronavirus vaccine that could save lives. The president said his political opponents and the media are creating a “terrible situation” instead of being excited about the possibility of getting a COVID-19 vaccine “in record time.”

Earlier this month, Trump said that a coronavirus vaccine could be ready “during the month of October,” right before the Nov. 3 presidential election.

“And what’s happening is, all of a sudden, you’ll have this incredible vaccine, and because of that fake rhetoric — it’s a politic rhetoric; that’s all it is. Just for politics,” Trump said during a Sept. 7 press conference. “Because now they see we’ve done an incredible job, and in speed like nobody has ever seen before. This could’ve taken two or three years, and instead it’s going to be — it’s going to be done in a very short of period of time. Could even have it during the month of October.”

During an interview that will air Sunday on Fox News’ “Life, Liberty, & Levin,” Trump told host Mark Levin, “Instead of saying, ‘Wow, that’s great. It’s going to save a lot of lives and people are going to be protected, and this whole thing will end faster’ … They started denigrating it.”

Trump said the media and Democrats are diminishing the potential coronavirus “when actually it’s one of the greatest things that anyone’s done, and I’m not saying me – I’m saying anyone. It’s so incredible.”

“You would think they’d be happy and thrilled and jumping up and down,” Trump said. “Instead … it’s just a terrible situation.”

“The reason they’re doing it is because they think I’ll get credit if we have a vaccine anywhere near the election, but certainly before the election,” Trump told Levin. “But essentially we’re there now anyway, and we’re ready to distribute very rapidly.”

“It’s a tremendous thing that they’ve done and we’ve all done together,” Trump explained. “Then we’re ready to distribute it very quickly, and we’ll do our senior citizens first – the most vulnerable, … especially if they have a problem with a heart or they have diabetes or something.”

“I have totally changed the FDA process,” Trump added. “Same safety, but the speed is from a different world, and we should have the vaccine approved very soon.”

Joe Biden hinted that the president was politicizing the potential coronavirus vaccine.

“A vaccine would offer a way back to normalcy and a path toward better days for all of us… But it’s not going to happen overnight,” Biden said on Wednesday in Delaware. “One thing is certain, we can’t allow politics to interfere with a vaccine in any way.”

“Americans have had to endure President Trump’s incompetence and dishonesty when it comes to testing and personal protective equipment,” Biden continued. “We can’t afford to repeat those fiascos when it comes to a vaccine, when it occurs. The stakes are too high.”

“So let me be clear, I trust vaccines. I trust scientists. But I don’t trust Donald Trump. And at this moment, the American people can’t either,” the Democratic presidential nominee said.

Biden’s running mate Sen. Kamala Harris was accused of promoting a “dangerous conspiracy theory” and “anti-vaxxer” talking points for her comments about a possible COVID-19 vaccine.

When asked if she would get an approved COVID-19 vaccine, Harris said, “Well, I think that’s gonna be an issue for all of us. I will say that I would not trust Donald Trump, and it would have to be a credible source of information that talks about the efficacy and the reliability of whatever he’s talking about. I will not take his word for it.”

Harris said scientists would “be muzzled, they’ll be suppressed, they will be sidelined, because [Trump is] looking at an election coming up in less than 60 days, and he’s grasping for whatever he can get to pretend that he’s been a leader on this issue when he’s not.”

Trump praised the companies working on the coronavirus vaccine, including Johnson & Johnson, Pfizer and Moderna. The pharmaceutical companies are in Phase 3 trials. On Friday, Trump announced that the COVID-19 vaccine would be distributed within 24 hours of completion of Phase 3 trials and approval by the FDA.

On BlazeTV, Steven Crowder exposed how the mainstream media launched attacks on Trump regarding the potential of a COVID-19 vaccine this year.