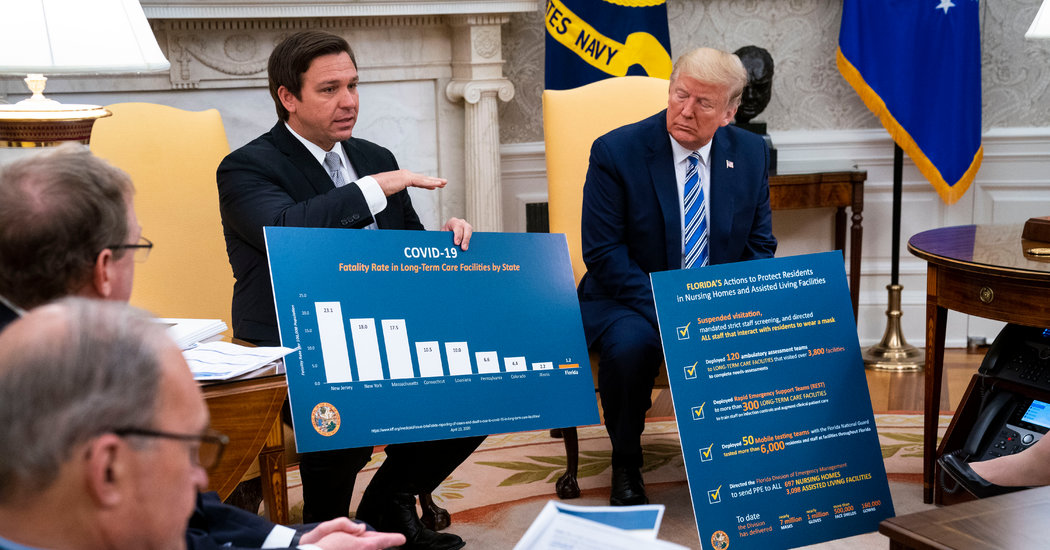 WASHINGTON — A week ago, President Trump chastised Georgia for starting to reopen. “It’s too soon,” he said. But on Tuesday, he cheered Texas as it began resuming business. “Great job,” he said. And Florida may be next as the president welcomed its governor to the Oval Office.

White House guidelines urge states to retain coronavirus restrictions until they meet certain criteria, but Attorney General William P. Barr is now threatening to sue them if he deems those limits too strict. And even as the president talks about opening the country, he has ordered it closed to immigration, even suggesting on Tuesday that flights from Brazil be banned.

With more and more states ready to resume some semblance of normal life, the messages from Mr. Trump and his administration at times have sounded contradictory and confusing. The president is anxious to get the stalled economy running again as the election grows nearer, and he has encouraged protests against restrictions in some states even as parts of his own government counsel caution for fear of rushing into a second wave of the disease.

The contrast was on display on Tuesday even as the number of cases in the United States surpassed one million and the death toll of 52,000 approached the total American military casualties of the Vietnam War. Mr. Trump hosted Gov. Ron DeSantis of Florida at the White House to talk about reopening a state that has stirred deep concern because of its disproportionate population of retirees and the crowded public beaches that remained open long after experts recommended they be closed. The president later staged a ceremony in the East Room with small businesses to talk about getting back to work.

“Now that our experts believe that the worst days of the pandemic are behind us, Americans are looking forward to the safe and rapid reopening of our country,” Mr. Trump said at the event as he showcased several business owners and workers benefiting from the federal relief program approved by Congress.

But shortly before that, one of his top health advisers, Dr. Anthony S. Fauci, the director of the National Institute of Allergy and Infectious Diseases, was warning against precipitous action by the states.

“Hopefully everyone does it according to the guidelines for ‘Opening Up America Again,’” Dr. Fauci said, referring to the federal recommendations during a video talk sponsored by the Economic Club of Washington, D.C. Otherwise, he said, premature action could lead to “a rebound to get us right back in the same boat that we were in a few weeks ago.”

The president and the scientist also offered different projections about whether the virus would strike again in the fall and how hard. “This is going to go away and whether it comes back in a modified form in the fall we’ll be able to handle it,” Mr. Trump said confidently. “We’ll be able to put out spurts.”

Dr. Fauci, on the other hand, said the virus “is not going to disappear from the planet” and will absolutely come back. “In my mind, it’s inevitable that we will have a return of the virus or maybe even that it never went away,” he said, adding that the United States “could be in for a bad fall” if no treatment is developed by then.

Even in his own public appearances on Tuesday, Mr. Trump seemed to send multiple signals. He announced that he would sign an executive order meant to keep the meat industry open while suggesting that he would stop many visitors from Latin America, test anyone entering the United States from anywhere in the world and crack down on so-called sanctuary cities that protect undocumented immigrants.

The jarringly dissonant messages have been a persistent feature of Mr. Trump’s response to the pandemic but take on particular consequence now as states, localities, businesses and workers look to Washington for guidance on when and how to begin easing the restrictions that have been credited with preventing a worse pandemic.

“All of our life’s experience has taught us one thing about conflicting information: It creates paralysis or contributes to ill-informed decisions,” said Chris Jennings, who was a top White House health adviser to Presidents Bill Clinton and Barack Obama. “Hardly a prescription for success; indeed a road map to failure. Having worked with states for decades, this is a tragedy.”

Mr. Trump started his day by encouraging states to lift restrictions. “Many States moving to SAFELY & QUICKLY reopen!” he wrote in the morning, singling out Texas in particular and denying that there was any shortage of testing for the virus despite the complaints of many governors that they needed more to be able to determine how far the virus had spread before restoring a semblance of normal life.

In hosting Mr. DeSantis at the White House, advisers said, Mr. Trump hoped to address nervousness among the battleground state’s senior citizens, who have been the most important part of his political base but are also the most vulnerable to the virus.

Mr. DeSantis backed up the president, saying that “our ability to test exceeds the current demand.” Mr. Trump said that was “a fantastic thing.”

The governor, whose stay-at-home order expires on Friday, plans to announce on Wednesday his strategy for what he called a gradual reopening, vowing to approach it in a “thoughtful, measured and data-driven way.”

Mr. DeSantis defended his decision not to close as early as other states, saying he had taken “tailored” steps, unlike the “draconian” restrictions imposed in other states. “Everyone in the media was saying Florida was going to be like New York or Italy, and that has not happened,” he said.

Florida continues to accept airline flights from Latin America, but Mr. Trump asked Mr. DeSantis if he would soon be “cutting off Brazil.”

“Well, not necessarily cut them off,” Mr. DeSantis offered.

“Would you ever want to ban certain countries?” Mr. Trump asked.

If they were a threat to the United States, he said.

The governor later suggested that he could potentially resume tourism, a critical industry for Florida. “We have to make safety a priority,” he said, but “I do think there’s a path to do that.”

Responding to questions from reporters, Mr. Trump again defended his handling of the virus but did not respond directly when asked if he was receiving warnings in his daily intelligence briefing in January and February, as The Washington Post has reported. “I would have to check” the dates, he said.

Data shows that Florida’s testing rate over the past week was slightly below the national average. As of Monday, the state was conducting an average of 60 tests per 100,000 residents, according to the Covid Tracking Project. The national average was 68 tests, with some states performing many more: Rhode Island was averaging 254 tests per 100,000 people, and New York 141.

Florida has more than 32,800 coronavirus cases and has endured 1,170 deaths, most of them in the three populous counties from Miami to West Palm Beach. The state reported 83 new deaths between Monday and Tuesday, the highest single-day number in the state, after three days of unusually low death totals. But on a per capita basis, Florida has only one-tenth as many cases as New York and one-twentieth as many deaths.

Dr. Aileen M. Marty, an infectious disease professor at Florida International University who has advised local governments on the coronavirus, said that just because Florida’s testing centers were not filled up did not mean the state was doing enough to test people who might be spreading the infection without showing signs of sickness.

“What we should have been doing from the get-go is: You identify a case, you do the contact tracing and you test the close contacts,” she said. “There, you’re going to find the asymptomatic carriers.”