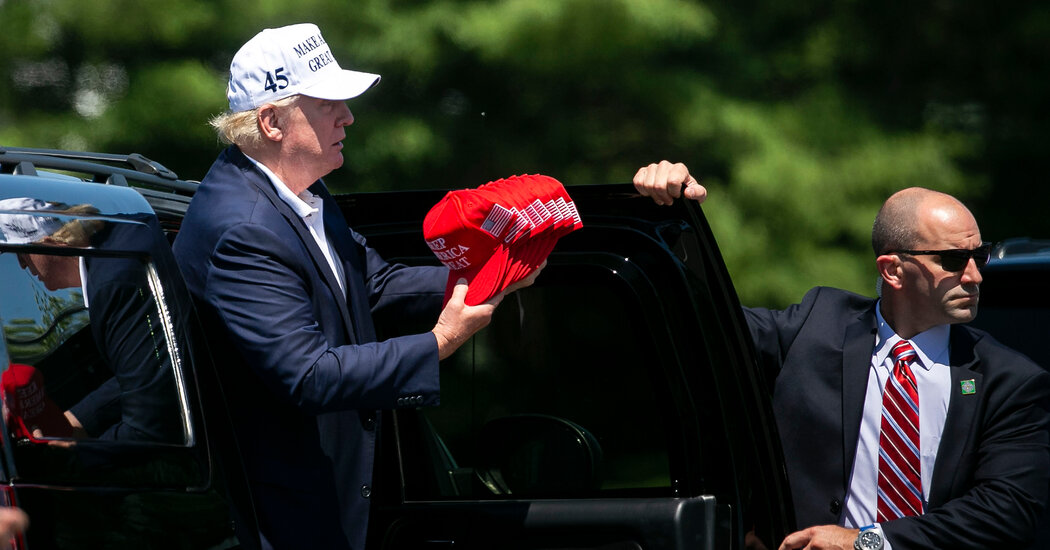 The New York Times reviewed 22 ads from the Trump campaign that have aired since June and that have been tracked by Advertising Analytics. We found that 14 of those ads contained clearly misleading claims or videos. Here’s a review.

Throughout much of June and July, the ads have focused on activists’ calls to defund the police with hyperbolic warnings about the ramifications.

One, titled “Break-In,” begins with a voice describing “Seattle’s pledge to defund its police department by 50 percent, even including a proposal to remove 911 dispatchers from police control” as an older woman notices someone breaking into her house and dials 911.

The woman’s call is then answered by a voice recording: “You have reached 911. I’m sorry that there is no one here to answer your emergency call. Leave a message and we’ll get back to you as soon as we can.”

Seven of Seattle’s nine council members support cutting and reprogramming 50 percent of the police department’s budget, but have yet to lay out a specific plan, while the city’s Democratic mayor and police chief oppose the goal.

Council members did express interest in a proposal from activists seeking to replace the police department’s call center with a system controlled by civilians. It would not end the use of emergency dispatchers altogether, as the voice mail message in the ad suggests.

Another spot devotes the entire 30 seconds to a more elaborate version of the emergency call voice mail, overlaid with text claiming that “violent crime has exploded” because of calls to defund the police — a claim echoed in three additional Trump campaign ads.

But that’s largely false. Compared with the same time period last year, violent crime and property crime have decreased through June in large American cities this year, though murders have increased.

Those ominous ad blitzes have run in major markets in swing states during programs with broad appeal like the “Today” show, “Good Morning America,” “Jeopardy!” and “The Late Show With Stephen Colbert,” according to data from Advertising Analytics.

A Trump campaign ad running during shows popular with Black audiences — “Maury,” “The Steve Wilkos Show” and “The Wendy Williams Show” — is sounding a different message: “Mass incarceration has put hundreds of thousands behind bars for minor offenses. Joe Biden wrote those laws.”

But it is wrong to blame Mr. Biden, who sponsored the Senate version of the Violent Crime Control and Law Enforcement Act of 1994, for mass incarceration. States began passing harsher sentencing laws in the 1970s and 1980s. Though the federal crime bill encouraged the trend, it was not the genesis or principal factor.

The former vice president has repeatedly said that he does not support calls to defund the police entirely, but that federal grants to police departments should incentivize reform efforts and best practices while specific decisions about funding should be made at a local level.

“I don’t support defunding the police,” Mr. Biden said in June in an interview with CBS. “I support conditioning federal aid to police based on whether or not they meet certain basic standards of decency and honorableness.”

Asked during a June town hall event about Los Angeles’s decision to shift $150 million from its police department, Mr. Biden responded: “Some places, they’re short on having enough people to cover the community or others the police departments have a lot more than they need. And so it depends on the community.”

The Trump campaign ad also took Mr. Biden’s comment out of context. In a July discussion, the prominent liberal activist Ady Barkan asked Mr. Biden whether he would support redirecting “some of the funding for police into social services, mental health counseling and affordable housing.”

“But do we agree that we can redirect some of the funding?” Mr. Barkan asked.

The published version of that conversation edited out some of Mr. Biden’s remarks that made his positions clearer. In the full version, provided to The Times by the Biden campaign, Mr. Biden emphasized that his proposals were “not the same as getting rid of or defunding all the police” and repeated that he believed federal grants to departments should be “conditioned.”

Analysis from the center does show that Mr. Biden’s tax proposals would generate an additional $4 trillion in federal revenue over the next decade, but the Trump campaign is wrong that this would come from the middle class. Rather, the wealthiest top 1 percent of taxpayers would bear about three-quarters of tax increases. In contrast, middle-class taxpayers would see an average increase of $260, totaling 2.4 percent of the total burden.

“Takeover” and a similar ad called “In His Own Words” also take a Biden quotation out of context: “If you elect me, your taxes are going to be raised, not cut.”

That remark occurred at an event in February in South Carolina, where Mr. Biden asked the audience, to laughs, “How many of you did really well with that $1.9 trillion tax cut?” When one audience member answered affirmatively, Mr. Biden addressed that person specifically. “I’m glad to see you doing well already,” he said. “But guess what, if you elect me, your taxes are going to be raised, not cut if you benefited from that.”

Mr. Biden has long criticized the 2017 tax cut as disproportionately benefiting the rich, though his criticisms have veered into exaggerations when he said only the rich received tax cuts. His comment in South Carolina was a riff on that theme.

In a Spanish-language ad, the Trump campaign exaggerated Mr. Biden’s stance on charter schools: “Democrats and Biden are too extreme. Socialism, cut police funding, take away charter schools and Biden is too weak to defend us.”

That line, however, is not representative of Mr. Biden’s position on charter schools. He was referring to his opposition to Ms. DeVos’s support for voucher programs for charter schools, according to a spokesman. He supports continuing federal funding for high-performing public charter schools.

One ad and its Spanish version call Mr. Biden “clearly diminished” and include a clip of Mr. Biden saying, “Sometimes I wake up and think it’s 1920.”

While Mr. Biden has been prone to gaffes on the campaign trail, that specific comment is not an example of one. Rather, it is how Mr. Biden has occasionally expressed dismay over the current social and political atmosphere.

“Some mornings that I wake up, I wonder whether or not we are living in 2020 or 1920,” he said in January in Texas. “I hear the voices of intolerance singing the chorus of hate, intolerance.”

“As I said in your church, rev, sometimes I wake up and think it’s 1920 and not 2020,” Mr. Biden at a February event in South Carolina. “The way in which we talk to one another today, the way in which — the debasing of politics that has occurred, the way in which this president, Trump, has so demeaned individuals.”

Curious about the accuracy of a claim? Email factcheck@nytimes.com.