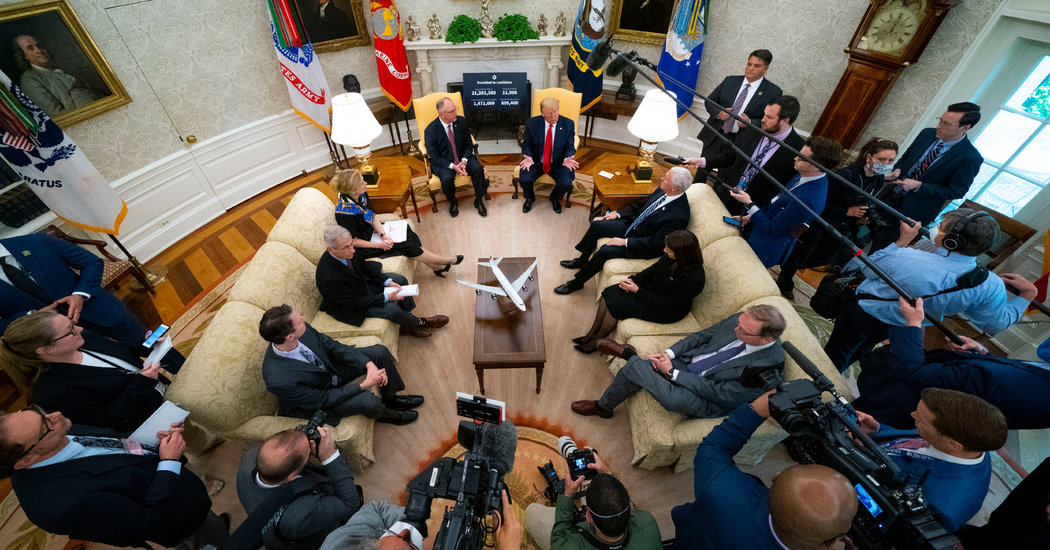 As states begin to lift quarantines, President Trump is trying to recast the story of the pandemic from that of an administration slow to see and address the threat to one that responded with decisive action that saved lives. Recognizing that the crisis jeopardizes his chances of re-election, he and his allies want to convince his supporters that the cascade of criticism is unwarranted.

“We think we really have crossed a big boundary and much better days are ahead,” Mr. Trump said on Wednesday at a televised meeting at the White House with business leaders. The session was intended to highlight what the president hopes will be the resumption of a healthier economy only hours after the release of the most cataclysmic economic numbers of the past decade.

“I often say I see the light at the end of the tunnel very strongly,” Mr. Trump said.

The president waxed at length about restoring life to the United States as if the crisis were nearly over. He disclosed that he plans to fly to Arizona next week and soon after that to Ohio, his first trips out of the White House since early March other than a short visit to Norfolk, Va., to see off a Navy hospital ship dispatched to hard-hit New York. He talked wistfully of going to football games and resuming his campaign rallies. “I’d like to get out,” he said.

In the revised history of the pandemic that Mr. Trump and his team offered, his actions were not belated and inadequate, but bold and effective. “We did all the right moves,” Mr. Trump said. “If we didn’t do what we did, you would have had a million people die, maybe more, maybe two million people die.”

“We’re on the other side of the medical aspect of this, and I think that we’ve achieved all the different milestones that are needed,” Mr. Kushner said on “Fox & Friends,” one of the president’s favorite shows. “The federal government rose to the challenge, and this is a great success story. And I think that that’s really, you know, what needs to be told.”

The comments came on the same day that the Commerce Department reported that the economy contracted by 4.8 percent in the first quarter of the year, the largest decline since the recession of a decade ago and probably the forerunner of a much steeper collapse in the second quarter that could be the worst since the Great Depression.

At the same time, the reported death toll from the virus in the United States topped 60,000 — more killed in eight weeks than the 58,000 American troops killed in eight years of major combat in Vietnam. The death toll has already reached where it was expected to be in August, more than three months from now, according to projections accepted by the White House. The University of Washington’s Institute for Health Metrics and Evaluation now estimates that 73,000 will die by August.

Mr. Kushner’s comments drew scorn from critics of the administration. “On what planet is 59,000 plus deaths a ‘success story’?” Michael R. Bromwich, a former federal prosecutor and Justice Department inspector general, asked on Twitter.

Zac Petkanas, a Democratic strategist and campaign aide to Hillary Clinton in 2016, said the public would not be convinced.

“The truth is that Trump and his administration’s response is anything but a success — especially when it comes to testing,” said Mr. Petkanas, now working with a health care advocacy group called Protect Our Care. “They made huge promises that they simply haven’t delivered, including that ‘anybody who wants a test can get a test.’ But they aren’t fooling anyone.”

Presidents have gotten in trouble declaring success at odds with the reality on the ground, perhaps most memorably in recent years when President George W. Bush landed on an aircraft carrier deck in 2003 and declared major combat operations over in Iraq in front of a “Mission Accomplished” banner. President Barack Obama later declared that “America’s war in Iraq will be over” when he pulled forces out in 2011, only to have to send troops back nearly three years later.

But Mr. Trump has demonstrated a striking tendency to try to frame the political narrative on his own terms, even when at variance with the facts, through relentless repetition and the power of his bully pulpit.

While making no criminal accusations last year against Mr. Trump, the special counsel Robert S. Mueller III pointedly said his report “does not exonerate” the president. Nonetheless, Mr. Trump declared so many times that it did that 35 percent of the public believed that Mr. Mueller had exonerated him, according to one poll, mainly the core supporters who matter to him most.

The need to shift the narrative was made abundantly clear by the latest spate of polls showing more Americans souring on his handling of the virus and supporting former Vice President Joseph R. Biden Jr., the presumptive Democratic presidential nominee, in the November election.

A survey by USA Today and Suffolk University found Mr. Biden leading 50 percent to 40 percent in a two-way matchup, a margin that disturbed Mr. Trump’s strategists, who have said they recognize that the election will turn largely on the coronavirus and resulting economic meltdown.

In his public appearances on Wednesday, Mr. Trump did not dwell on the 60,000 dead or the tens of millions put out of work, but focused instead on what he claimed were the successes of his administration. “A lot of progress had been made,” he said. “It’s pretty incredible.”

Mr. Trump promoted a new study on a possible treatment and predicted that the virus would soon no longer be a major threat. “This is going away,” he said, “and when it’s gone, we’re going to be doing a lot of things.”

Mr. Kushner said May “will be a transition month” as states began reopening. “I think you’ll see by June a lot of the country should be back to normal,” he said. “And the hope is that by July, the country’s really rocking again.”

Neither Mr. Trump nor Mr. Kushner addressed why the president for weeks played down the virus, comparing it with the ordinary flu, predicting that cases would go down to zero and suggesting that the virus would “miraculously” disappear. People close to the White House have said that Mr. Kushner agreed with Mr. Trump early on that the Democrats and the news media were hyping the virus to damage the president, although Mr. Kushner’s allies have insisted that he always took it seriously.

In his television interview, Mr. Kushner rejected the concerns of governors and public health experts who said that testing remains woefully inadequate to justify reopening the country after weeks of lockdown. Mr. Trump’s administration committed this week to helping states be able to test at least 2 percent of their populations each month, but public health experts said that was a fraction of what is needed to map out how far the virus has spread.

“We’ve done more tests than any other country in the world, so we’ve got to be doing a lot of things right,” Mr. Kushner said, referring to 5.8 million tests as of Tuesday.

“The eternal lockdown crowd can make jokes on late-night television,” he added, “but the reality is that the data’s on our side.”

“And President Trump has created a pathway to safely open up our country and make sure that we can get our economy going and get America back to a place where it will be even stronger than it was before,” Mr. Kushner said.