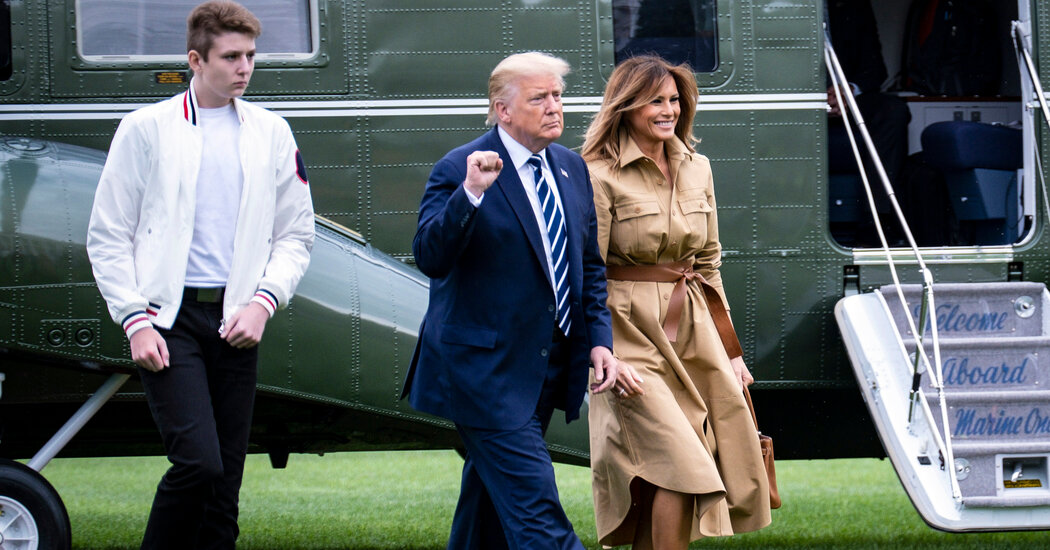 How many ways are there to say that this is not normal?

That it is not normal for a president to employ transparently racist and sexist attacks. Or pressure his attorney general to prosecute his foes with an election looming. Or resist money for the Postal Service in order to stop people from voting by mail. Or embrace a conspiracy theorist running for Congress. Or condemn American cities to “rot.”

President Trump, of course, long ago redefined what constitutes normal in the White House, but with 77 days left in a campaign that polls show he is losing, he is pushing all the boundaries at once. At the same time the champion of birtherism is again scraping the raw edges of America’s divisions over race, gender and national origin, he is propelling fringe ideas into mainstream conversation. And now, running as the incumbent, he has levers of power available to help salvage a flagging campaign.

Yet what once would have caused jaws to drop barely seems to register for long at this point because it is so quickly overshadowed by the next norm-busting statement or action. Five years after he originally kicked off his quest for the presidency, Mr. Trump has said and done so many things once considered out of bounds that his critics no longer even know whether to raise alarms or ignore another palpable bid for attention.

When the president recently promoted a “very impressive” doctor who blames various ailments on demon sperm and says treatments are being developed from alien DNA, it was barely a one-day story. When he endorsed a QAnon adherent running for Congress who warns that the world is controlled by a “global cabal of Satan-worshiping pedophiles,” it did not last that long.

Even on Saturday shortly before midnight, Mr. Trump took no rest from stirring the pot. At 11:09 p.m., just 15 minutes after posting on Twitter a statement mourning the death of his younger brother, he retweeted a message urging the abandonment of cities that he, as president, represents. “Leave Democrat cities,” the message read. “Let them rot.”

“Outrage fatigue is real. He has worn us out,” said former Senator Claire McCaskill, Democrat of Missouri. “But with each outrage, while we quickly move onto the next, he is failing to gain the confidence of any new supporters. I’ve never seen a candidate so incapable of reaching out to anyone other than his calcified base.”

Mr. Trump gets away with what no other president could because he overwhelms the system, said Sarah Longwell, a conservative consultant and founder of Republican Voters Against Trump who has conducted focus groups exploring attitudes toward the president.

“It’s not that we simply shrug and move on in the face of a scandal. It’s that there’s immediately a new scandal to focus on,” she said. “One scandal is something you can sink your teeth into and focus on. Hundreds become white noise.”

One person’s scandal is another’s moment of authenticity or admirable demonstration of political incorrectness or battle against the elitist “swamp” of Washington. The president’s base has remained remarkably constant over four years, hovering around 40 percent in most polls, largely unaffected by whatever outrages have consumed cable television on any given day — or energized by them in a way.

For many of Mr. Trump’s admirers, it is the very fact that the establishment finds him so outrageous that binds them to him, a sign that he must be doing something right if the chattering class is so offended. Others see it as entertainment, never taking it too seriously, like his old reality television show. Or his supporters put aside any concerns because they appreciate his policies on taxes, trade, regulation, judicial appointments, military spending or overseas wars.

“To an only modestly tuned-in public, the constant outrage, however justified, looks hysterical,” Ms. Longwell said. “There’s a lot of eye-rolling in the focus groups over the media constantly ‘freaking out’ about something Trump has done. They get worn out by ‘the negativity.’”

The last week has been filled with freakout-inducing moments. After former Vice President Joseph R. Biden Jr. chose Senator Kamala Harris as his Democratic running mate, Mr. Trump said he had heard “that she doesn’t meet the requirements” for the vice presidency because her parents were immigrants, even though she was born in California. Mr. Trump’s assertion has no basis in law but played to nativist sentiments and recalled his years of false suggestions that President Barack Obama was secretly born in Africa.

Mr. Trump likewise resorted to some of his favorite terms for women he does not like, characterizing Ms. Harris as “nasty,” “angry” and a “mad woman.” Eric Trump, one of the president’s sons, “liked” a since-deleted tweet that referred to Ms. Harris as a “whorendous pick.”

On the same day, the president played to old white fears by claiming on Twitter that “the ‘suburban housewife’ will be voting for me,” using a word more common in the 1970s than the 21st century, because if Mr. Biden wins he will force low-income housing into their communities “with Corey Booker in charge,” naming another Black senator (while misspelling his first name).

Mr. Trump backed off the eligibility argument against Ms. Harris at a Saturday evening news conference, saying that “it’s not something that I’m going to be pursuing.” But even then, he refused invitations to state flatly that Ms. Harris can run, suggesting it was still an open question by saying, “You would have thought that she would have been vetted by Sleepy Joe.”

The president’s defenders denied that his comments were racist. Paris Dennard, the senior communications adviser for Black media affairs at the Republican National Committee, said there were “Black suburban housewives” just as there were white ones.

“This is an economic and real estate issue and not a racial one,” he said. “President Trump’s record for achievement for the Black community, in just four years, speaks volumes compared to Joe Biden’s long record of bigotry, racist statements and policies like his crime bill, that have destroyed the Black families, communities and generational wealth.”

Unlike in 2016, when Mr. Trump’s comments on Mexicans, Muslims, women, veterans and people with disabilities generated shock, his remarks now carry extra weight because he has the power of the federal government at his disposal.

On Fox Business last week, Mr. Trump seemed to pressure Attorney General William P. Barr to prosecute his political enemies. “Bill Barr can go down as the greatest attorney general in the history of our country or he can go down as just an average guy,” the president said while accusing Mr. Obama’s administration of spying on him. “It depends on what’s going to happen.”

Mr. Barr has ruled out charges against Mr. Obama or Mr. Biden but last week said he would not hold off action against others before Nov. 3. “We’re not going to do anything for the purposes of affecting an election,” he told the conservative talk show host Buck Sexton. “But, you know, we are trying to get some things accomplished before the election.”

Mr. Barr has already repeatedly taken actions advocated by Mr. Trump benefiting the president’s associates, including reducing a sentence recommendation against Roger J. Stone Jr. and moving to drop a case against Michael T. Flynn even after he pleaded guilty. The president excitedly declared last week that an F.B.I. lawyer would plead guilty to misconduct tied to a surveillance warrant against a campaign adviser.

One Trump comment that did generate enduring reaction came when he seemed to acknowledge that he wanted to block money sought by Democrats for the Postal Service so as to stop mail-in voting, a form of balloting that he has previously said would doom Republican candidates. “They need that money in order to have the post office work so it can take all of these millions and millions of ballots,” he said. “If they don’t get those two items, that means you can’t have universal mail-in voting because they’re not equipped to have it.”

By Saturday, he was recasting his position, telling reporters that “you’re right, there has to be more resources, I agree,” but blaming the opposition for not compromising on a broader coronavirus relief bill. “The problem is the Democrats are not approving the funds necessary,” he said.

And then there were comments that in an earlier era might have prompted a wave of indignation among Republicans — including Mr. Trump. Out of the blue, he told The New York Post that “a lot of people” think that Edward Snowden, the former national security contractor who fled to Russia after leaking information on secret government surveillance programs, “is not being treated fairly” and then on Saturday said he was considering a pardon.

Such a notion once would have upset Mr. Trump. In 2013, as a private citizen, he repeatedly assailed Mr. Snowden, calling him “a spy who should be executed” and declaring that “if I were President, Snowden would have already been returned to the U.S. (by their fastest jet) and with an apology!” (Needless to say, Russia has never returned Mr. Snowden, much less apologized, even though Mr. Trump is president.)

“Trump likes to distract people,” said former Gov. James J. Blanchard of Michigan, a Biden delegate advising the campaign in his battleground state. “He thinks he can do that by dominating the news. And he distracts from the real issues, which are managing the coronavirus and dealing with divisiveness among our people.”

But with his party leading in the polls, Mr. Blanchard said it would be a mistake to rise to the bait. “I don’t want Democrats to overreact to every little thing,” he said. “We have to keep our eye on the prize.”