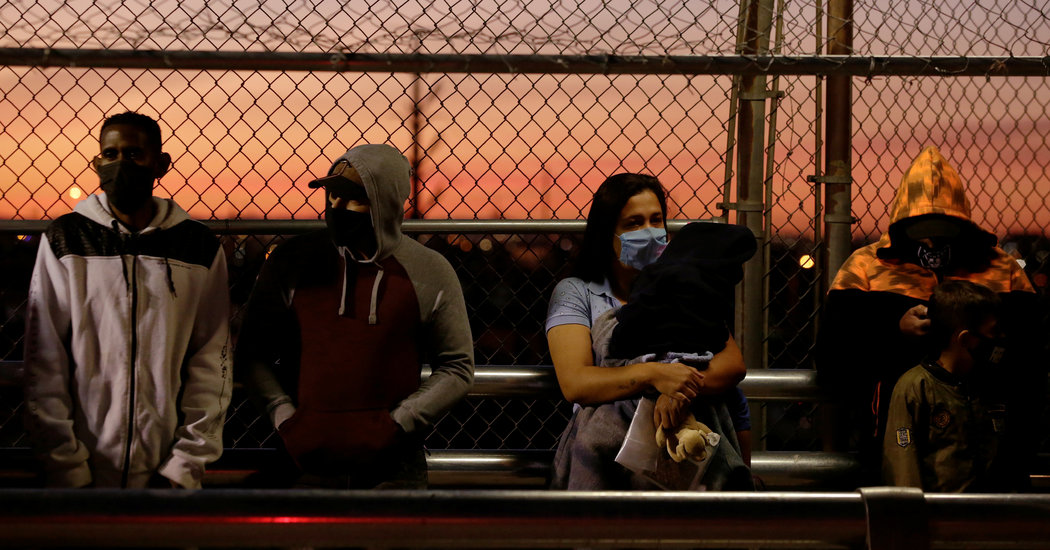 WASHINGTON — President Trump said on Tuesday that he would order a temporary halt in issuing green cards to prevent people from immigrating to the United States, but he backed away from plans to suspend guest worker programs after business groups exploded in anger at the threat of losing access to foreign labor.

Mr. Trump, whose administration has faced intense criticism in recent months for his handling of the coronavirus crisis, abruptly sought to change the subject Tuesday night by resuming his assault on immigration, which animated his 2016 campaign and became one of the defining issues of his presidency.

He cast his decision to “suspend immigration,” which he first announced on Twitter Monday night, as a move to protect American jobs. But it comes as the United States economy sheds its work force at a record rate and when few employers are reaching out for workers at home or abroad. More than 22 million Americans have lost their jobs in the economic devastation caused by the virus and efforts to contain it.

Mr. Trump said that his order would initially be in effect for 60 days, but that he might extend it “based on economic conditions at the time.”

“We can do that at a little bit different time if we want,” he said of a second executive order that could further restrict immigration.

While numerous studies have concluded that immigration has an overall positive effect on the American work force and wages for workers, Mr. Trump ignored that research on Tuesday, insisting that American citizens who had lost their jobs in recent weeks should not have to compete with foreigners when the economy reopens.

“By pausing immigration, we will help put unemployed Americans first in line for jobs as America reopens. So important,” the president said. “It would be wrong and unjust for Americans laid off by the virus to be replaced with new immigrant labor flown in from abroad. We must first take care of the American worker.”

Lawyers at the Justice Department were still studying whether the president had the legal authority to unilaterally suspend the issuance of green cards, an order that caught officials at the Defense Department and the Department of Homeland Security off guard, according to people with knowledge of the announcement.

The decision not to block guest worker programs — which provide specific visas for technology workers, farm laborers and others — is a concession to business groups, which assailed the White House on Tuesday. Jason Oxman, the president of the Information Technology Industry Council, a trade group, said in a statement earlier in the day that “the United States will not benefit from shutting down legal immigration.”

Rob Larew, the president of the National Farmers Union, said even talk of restrictions on immigrant farm workers was disruptive. “It just adds to an already stressed food system,” he said.

“If we do not have enough workers at the front end of that, it just adds more challenges to folks that need to get the food,” he added.

As late as Monday night, after Mr. Trump’s tweet, top White House officials said they believed the president’s order would apply to some of the guest worker programs, while exempting others. By Tuesday afternoon — amid the business backlash — officials acknowledged that devising an order that applied to some guest workers but not others would be overly complicated, and they abandoned it.

Mr. Trump said that his “pause” in immigration “will not apply to those entering on a temporary basis,” a reference to the worker visas, though he hinted that could change. “We want to protect our U.S. workers,” he said, “and I think as we move forward, we will become more and more protective of them.”

The decision to maintain most temporary work visas is certain to please business executives, but it will disappoint anti-immigrant groups, which have long called on the president to put an end to the guest worker programs they view as robbing Americans of jobs. And it could undermine Mr. Trump’s message to voters, many of whom are angry about competition from the foreign workers brought into the United States through those programs.

In recent weeks, the Trump administration has used health concerns to justify aggressively restricting immigration. Even before Tuesday’s announcement, the administration had expanded travel restrictions, slowed visa processing and moved to swiftly return to their home countries asylum seekers and undocumented immigrants who cross the border, alarming immigration advocates who have said that Mr. Trump and his advisers are using the pandemic to further hard-line immigration policies.

The president’s new executive order, which he could sign as early as Wednesday, will further close off the United States to tens of thousands of people seeking to live and work in the country, a move intended in part to stoke populist anger among his core supporters as he heads toward Election Day in November. Last year, about one million people were granted legal permanent resident status, commonly referred to as a green card.

Officials said on Tuesday that American citizens seeking to bring their children or spouses to the United States would still be allowed to do so. But the path to living and working in the country legally would be blocked for other foreigners, including the relatives of current green card holders and those seeking green cards based on a job offer.

An analysis by the Migration Policy Institute estimates that the policy could affect as many as 660,000 people.

The announcement on green cards elicited a fierce reaction from immigration rights advocates, who accused Mr. Trump and Stephen Miller, the architect of the president’s immigration agenda, of using the grim economic fallout from the coronavirus pandemic as a justification for a broad assault on the nation’s legal immigration system.

“No one is losing their job because of competition from immigrants; they’re losing their job because no one can leave their house,” said Doug Rand, who worked on immigration in the Obama administration and helped found a technology company in Seattle that helps immigrants obtain green cards and citizenship. He said the president’s advisers were using the pandemic to cut back on immigration the way they had always wanted to.

Others called the president’s announcement misguided and accused Mr. Trump of being motivated by an ugly, anti-immigrant sentiment.

“This is both a political act to demagogue and distract from his awful handling of the Covid-19 crisis and lack of testing,” said Todd Schulte, the president of FWD.us, a technology group that advocates immigration, “and it is also a policy effort by hard-liners to use this crisis to enact their awful, decades-old wish list to radically slash immigration.”

The president’s re-election campaign on Tuesday sent an email to his supporters underscoring the political importance of the issue for Mr. Trump, who successfully used anti-immigrant talk as a weapon in the 2016 campaign and made attempts to sharply reduce immigration one of the defining issues of his time in the White House.

“Pres. Trump will sign an Executive Order to suspend immigration,” read a text message to supporters. “Do you support his decision to protect us from the Coronavirus? Take Survey NOW.”

Tim Murtaugh, a spokesman for the president’s 2020 campaign, said in a statement that “at a time when our economy has been artificially interrupted by the virus, introducing more competition for jobs would worsen unemployment and depress wages, especially in black and Latino communities.”

Anti-immigration activists said they were hopeful that the president’s executive order would make good on the sweeping promise from Monday night’s tweet to suspend immigration into the United States.

Roy H. Beck, the founder of NumbersUSA, a group that presses for deep cuts in legal immigration, said that such a message would be a potent political tool as Mr. Trump faces off against former Vice President Joseph R. Biden Jr. in the election.

“Absolutely it’s powerful,” Mr. Beck said. “If he comes out with an executive order that honors that tweet, he really is telling voters, I get it. When you have job loss, you can’t have immigration. That is the populist message that I think was his strongest suit in 2016.”

It was unclear what legal authority the president will claim to shut off the decades-old immigration system, even temporarily. In the past, he has cited health emergency powers to restrict asylum at the southwestern border, and the White House has repeatedly invoked broad executive powers in immigration law to impose travel bans.

A Homeland Security Department official said early Tuesday that the executive order was still being drafted — leaving some top agency officials in the dark — and that details of the potential ban, including on specific exemptions, were subject to change. Officials said the effort was being coordinated by Mr. Miller and a handful of his allies, including Robert Law, the chief of policy and strategy for Citizenship and Immigration Services.

Some military officials also seemed to be caught by surprise on Tuesday by Mr. Trump’s late-night Twitter message. Gen. Terrence J. O’Shaughnessy, the head of the military’s Northern Command, which supports homeland defense and border security, said on Tuesday that he had not received any new orders to assist border operations.

Even before the president’s announcement Tuesday evening, officials were working on the assumption that visas for guest workers, including farm laborers, would be exempt from the executive order, according to an official. Hours before Mr. Trump tweeted the announcement, the administration published a final rule that eased requirements for employers like farmers that use the H-2A program by lifting a three-year limit for such seasonal workers.

The State Department suspended visa services last month at U.S. embassies and consulates, but immigrants were still able to take procedural steps to come to the United States. Those already in the country were also still able to petition for their relatives abroad to come to the United States in the hopes of reuniting with their families. While the Trump administration has already paralyzed multiple aspects of the immigration system, including halting in-person interviews and naturalization ceremonies, immigration experts and administration officials said an executive order could have longstanding consequences.

“Their first impulse when you’re confronted with a crisis is to shut down immigration,” Jeh Johnson, a homeland security secretary under President Barack Obama, said on Tuesday during an online panel hosted by the House Homeland Security Committee.

“The first impulse and the last impulse,” he said, “can’t always just be stop immigration to prevent a public health disaster that is already here within our borders.”