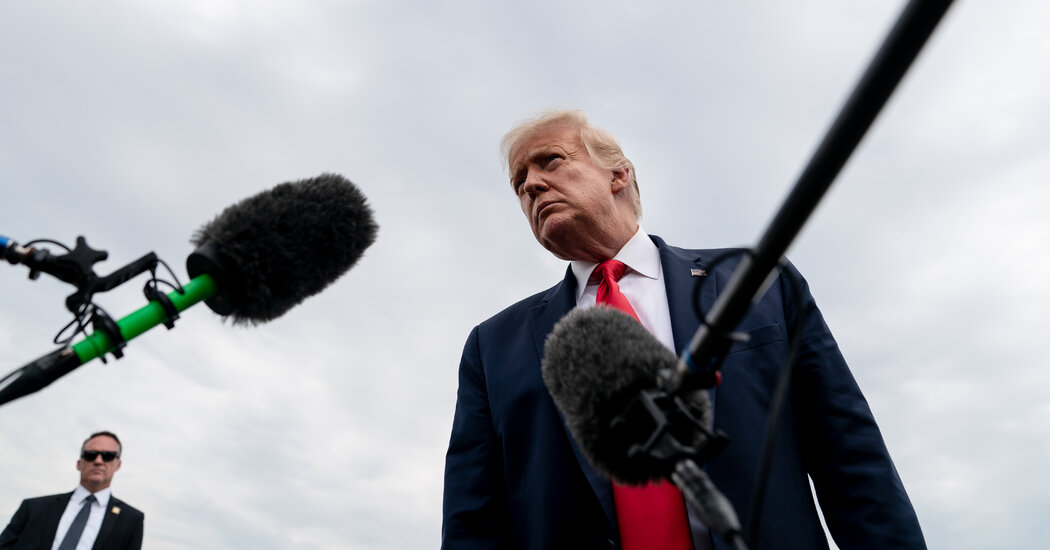 The Trump campaign is launching an aggressive four-day digital advertising campaign that will take over some of the internet’s most conspicuous real estate during the three marquee days of the Democratic National Convention, which most viewers will watch online.

Adhering to the president’s penchant for focusing attention on himself during major Democratic events, the Trump campaign will be taking over the banner of YouTube for 96 hours starting on Tuesday, the second day of the convention, an expensive and far-reaching digital gambit.

The campaign will also blanket the home pages of The Wall Street Journal, The Washington Post and FoxNews.com with Trump campaign ads. Even non-D.N.C. programming will be inundated with Trump ads, as the campaign has bought premium, or “unskippable,” ads on sites like Hulu.

The campaign amounts to “high-seven figures,” a significant sum to spend online in such a short period of time, and could top $10 million based on the engagement metrics of some ads (a few digital ads are sometimes charged extra based on engagement). The takeover of the YouTube banner and the news sites’ home pages are national buys, while the spending for Hulu and others will be in swing states.

It’s an attempt to be as digitally ubiquitous as possible during a nearly all-digital convention, and the Trump campaign will be tailoring its message to a direct attack on the Democratic platform as a far-left manifestation of a Republican’s worst fears. Trump campaign officials said they were able to grab the digital slots because the Democrats, who moved their original convention date, had not purchased the time for the original week in July, nor for the new one beginning on Monday.

“It’s great that Team Biden let the Trump campaign grab up the best premium real estate on the internet during Joe’s big week,” said Tim Murtaugh, a spokesman for the Trump campaign. “We’ll show millions of Americans exactly how the radical, leftist takeover of Joe Biden is now complete.”

“No smoke and mirrors charade can conceal that Donald Trump’s failed leadership has cost over 167,000 Americans their lives and driven the strong economy he inherited from the Obama-Biden Administration into one of the deepest recessions in our history,” Mr. Bates said.

The last presidential campaign to take over the banner of YouTube for an extended period of time was Michael R. Bloomberg’s campaign, which did so for 24 hours the day after Mr. Trump was impeached.

“It’s a massive deal — this is the home page for the largest online video platform in the world,” said Tim Cameron, a Republican digital strategist. “In the same way that Netflix highlights their latest content, this will have a very similar effect where people are going to see it. And many of them will opt in to this viewing experience and consume this content.”

Of course, even an elaborate ad campaign endeavoring to bracket the convention won’t be able to overtake the conversation around an event that will get hours of airtime each night and feature numerous Democratic luminaries.

But the Trump campaign is also making it nearly impossible to be missed. With a heavy focus on premium unskippable “pre-roll” ads that display before content begins on YouTube and other streaming platforms, users will be forced to watch the entire Trump campaign ad before watching their chosen videos.

The campaign has focused heavily on a digital strategy for the past few years.

Biden campaign officials said that they have consistently spent money for ads on Hulu, and said that they are investing their money in more strategic ways on YouTube, consistently focusing on targeted states. They said their own data indicates spending after a major event matters more, and that the Biden team has reserved time on YouTube for the day after the Republican National Convention ends on Aug. 27. (The Trump campaign will also have their premium YouTube ad on the Friday following the convention.)

Republicans contend that the Trump campaign will be able to reach a large audience with their approach.

“You’re going to have a very effective message penetration because the people who are served an unskippable ad want to see that content after the ad,” said Michael Duncan, a Republican digital strategist.

“So they are willing to spend 15 seconds watching your message,” he added. “It’s not like television where an ad comes on and you can go to the bathroom or leave the room until the show comes back on — that unskippable inventory has the ability to not only add a lot of scale but a lot of quality to your digital buy.”