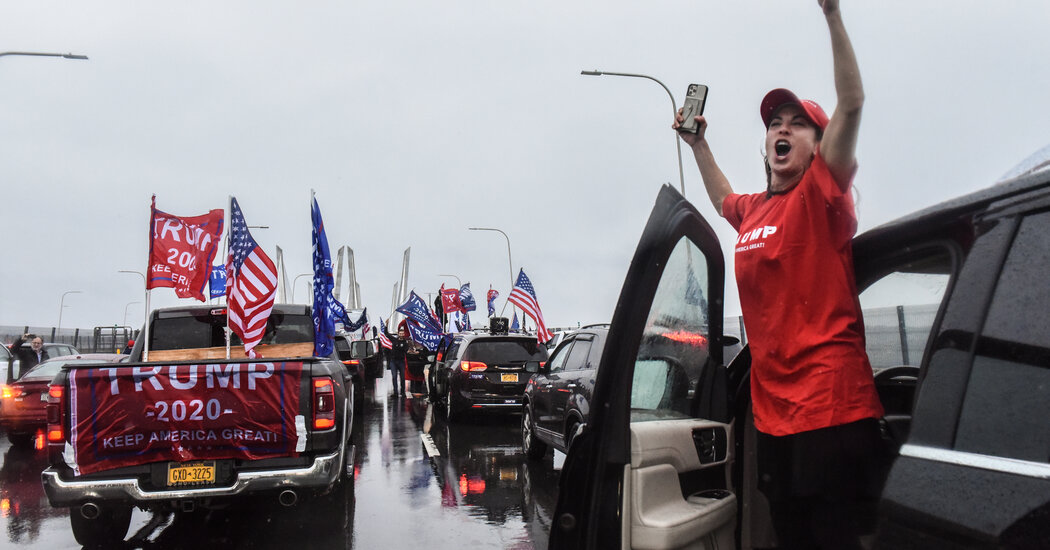 The battle for the presidency is hitting the road.

On Sunday, the F.B.I. said it was investigating the Texas incident, which Mr. Biden described as an effort to run his team “off the road.”

But Mr. Trump defended the Texas drivers in a post on Twitter on Sunday night, saying, “In my opinion, these patriots did nothing wrong. Instead, the FBI & Justice should be investigating the terrorists, anarchists, and agitators of ANTIFA, who run around burning down our Democrat run cities and hurting our people!”

And his spokesman, Jason Miller, when asked about the New York and New Jersey incidents, made a similar plea, saying that he was more concerned with “downtown Washington businesses having to board up their windows in anticipation of lawless, violent Biden supporters rioting and looting on Tuesday night.”

During the Texas incident on Friday, multiple vehicles bearing Trump flags and signs surrounded a Biden-Harris campaign bus heading from San Antonio to Austin, forcing the Biden campaign to scrap two events, according to reports by Democratic officials.

“We are so much better than this,” Mr. Biden said during a campaign stop in Philadelphia on Sunday. “It’s not who we are. And we got to change it.”

Then, on Sunday, caravans of Mr. Trump’s supporters blockaded the Gov. Mario M. Cuomo Bridge and the Garden State Parkway, snarling traffic on two of the busiest highways in the New York metropolitan area just two days before Election Day.

Videos taken by motorists showed the president’s backers parked in the middle of the westbound lanes of the bridge, which carries Interstate 287 across the Hudson River and is named for the father of the current governor, Andrew M. Cuomo.

A number of them exited their vehicles in the rain and waved Trump banners and American flags as motorists honked their horns.

The episode happened around midafternoon, with the caravan lining up on the interstate’s shoulder in Tarrytown before driving onto the span, which replaced the Tappan Zee Bridge and connects Rockland and Westchester counties.

State Senator David Carlucci, a Democrat who represents Rockland County, called the blockade on the bridge “aggressive, dangerous and reckless,” with individuals “causing danger to themselves and others.”

“The New York State Police should be working to identify these individuals and charging them,” Mr. Carlucci said. “We all have the right to show support for a presidential candidate, but we do not have the right to endanger others and break the law.”

William Duffy, a spokesman for the New York State Police, said that troopers had monitored the protest, but that there were no arrests.

“The bridge was never shut down,” Mr. Duffy said, adding that traffic had been restored. Traffic had been briefly halted three times, according to the state police.

In New Jersey, a caravan of Trump supporters snarled traffic on the northbound lanes of the Garden State Parkway near the Cheesequake Service Area in South Amboy, according to videos and local media reports.

New Jersey State Police did not immediately respond to requests for comment.

Sunday’s disruptions came amid rising tensions over the election.

In Georgia, Democrats said they decided to hold a virtual news conference instead of an in-person event in Floyd County, where they intended to criticize Mr. Trump for holding a large rally in the county seat, Rome, during the coronavirus pandemic. Democratic officials said they opted not to hold an in-person event because they were concerned about a possible “large militia presence” in town, drawn by Mr. Trump’s rally.

“He seems to be pouring fuel on fire of fear and hatred,” said Wendy Davis, a Democrat and city commissioner in Rome. “We have reason to believe that there might be people looking for trouble today and our friends in law enforcement were busy protecting the president here locally as they should have been. Out of an abundance of caution, we said, we’re going to de-escalate.”