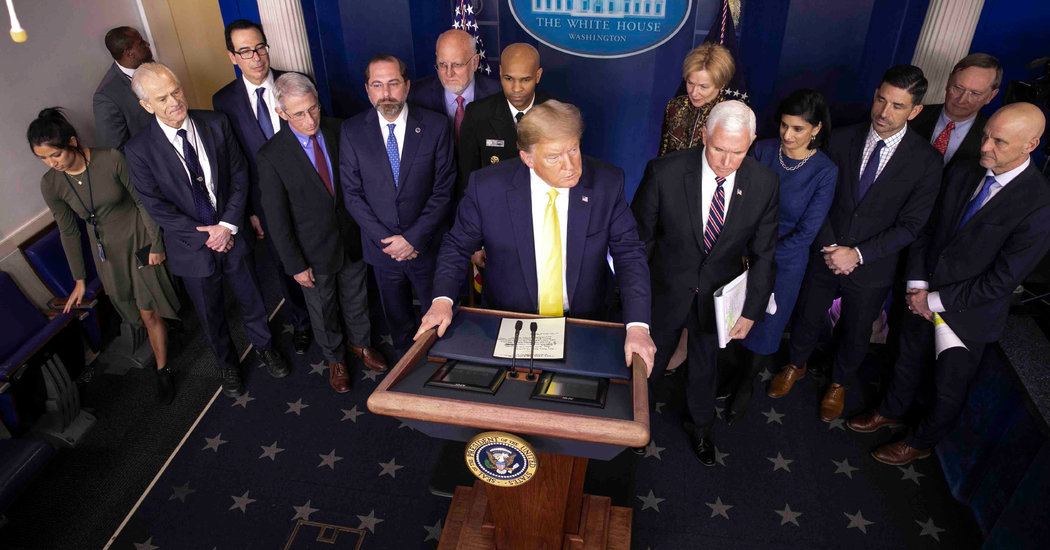 WASHINGTON — President Trump moved on Monday to address the economic effects of the widening coronavirus crisis by announcing that he would work with Congress on tax cuts and other measures after the worst stock market drop in more than a decade.

The president, who played down the virus threat earlier in the day, made an unscheduled evening appearance in the White House briefing room after two Republican members of Congress who have spent time with him in recent days, including one who just rode with him on Air Force One, put themselves into quarantine following exposure to the virus.

Also putting himself into isolation was Mark Meadows, the president’s newly designated White House chief of staff. Mr. Meadows, who was named to the role only on Friday and is stepping down from his House seat representing North Carolina, came into contact with the same infected attendee as the other two congressmen at a recent conservative political conference. While he tested negative for the coronavirus, his office said, he would remain quarantined until Wednesday.

The threat of the virus coming so close to the president represented a new stage of the outbreak even as it prompted organizations across the country to restrict travel and cancel widely attended gatherings. Mr. Trump made no mention of his own contacts with the affected lawmakers but, clearly unsettled by the plunging markets and the potential effect on his re-election prospects, he offered an economic response without any new health measures.

In his evening statement to reporters, he said he would meet on Tuesday with Republican congressional leaders to discuss a “very substantial” payroll tax cut and legislation to protect hourly wage earners who may have to miss work because of the virus. He said he would also discuss expanding loans by the Small Business Administration. He did not provide any details.

“It’s not their fault,” he said of affected workers. “It’s not our country’s fault. This was something that we were thrown into and we’re going to handle it and we have been handling it very well.”

The developments came on one of the most jarring days of Mr. Trump’s presidency as markets plummeted, infections rose, schools and universities shut down classes and other nations imposed drastic travel restrictions. With individual lawmakers now heading into isolation, members on Capitol Hill contemplated whether Congress should recess altogether for the foreseeable future to guard against a further spread among the nation’s legislators.

The tension of the day was reflected on Air Force One as it made its way from Florida back to Washington. Representative Matt Gaetz, Republican of Florida, boarded the plane steps behind the president in Orlando, where Mr. Trump held a campaign fund-raiser, only to learn shortly after takeoff that he had been in contact with an infected person at a conservative conference late last month. He then essentially quarantined himself in the air, left to sit in a compartment of the plane by himself.

As the jet raced toward Washington, its television screens were tuned to Fox News showing the slow-motion progress of a cruise ship with 21 infected passengers heading to a port in Oakland, Calif., followed by overhead cameras under a “Virus Ship Watch” chyron, while a red box in the lower-left-hand corner showed the sinking Dow Jones industrial average, which finished the day down more than 2,000 points, or about 7 percent.

Mr. Trump, who regularly invokes the market as an indicator of his success, on Twitter initially blamed the meltdown on falling oil prices and the news media even though most market analysts attributed the bulk of it to concern about the effect of the virus on the global economy. He made no mention of it when he met with reporters in the evening.

He did praise his own decision last month to restrict entry to the United States by foreign citizens who had been to China in the previous 14 days.

“The big decision was early when we shut down our borders,” he said, overstating the action he took. “We were the first ones ever to do that. We’ve never done that in our country before. We would have a situation that would be a lot more dire.”

Mr. Trump has resisted canceling campaign rallies despite other large events being scrubbed, and a person close to the campaign said he would announce another one on Tuesday. But his campaign on Monday called off a “Women for Trump” bus tour featuring his daughter-in-law and other top election surrogates.

The three-day bus tour through the key battleground states of Michigan, Ohio and Pennsylvania was to, featuring Lara Trump, the wife of the president’s son Eric Trump; Kayleigh McEnany, a campaign spokeswoman; and Mercedes Schlapp, a former White House adviser whose husband oversees the Conservative Political Action Conference, where an attendee has tested positive for the virus.

That attendee came into contact with at least four Republican lawmakers who have now quarantined themselves, including two who did so on Monday after spending time with the president.

Mr. Gaetz, who attended events with Mr. Trump at his Mar-a-Lago estate in Palm Beach on Friday and Saturday night, met up with the president again on Monday at the Orlando fund-raiser. Mr. Trump then asked Mr. Gaetz to join him on Air Force One back to Washington.

In an interview, Mr. Gaetz said that he received a phone call from his chief of staff as the plane was taking off telling him that a picture had been found of him with the infected conference attendee 11 days earlier, meaning he had potentially been exposed to the virus. He said he told John McEntee, a top White House official, and asked to be separated from the other passengers.

“He walked me back to a room toward the rear of Air Force One,” Mr. Gaetz said. “I went in there by myself.” A physician traveling with the president then came back and told him that since he had no symptoms 11 days later he probably had not contracted the virus. But Mr. Gaetz said he remained apart from the rest of the passengers for the rest of the flight.

As Air Force One was landing, Mr. Trump summoned him to the front of the plane. “I would not go into his office,” Mr. Gaetz said. “I stood outside of it. He just wanted to see if I was all right which I am.”

He said the president used humor to lighten the situation. “He asked if I needed to be wrapped in cellophane,” Mr. Gaetz said. “I told him that I was willing to jump out of the plane without a parachute if necessary.” He added that he was tested after landing and expects his results back on Tuesday.

Mr. Gaetz drew attention last week when he wore a bulky gas mask in the Capitol for the vote on an $8.3 billion emergency spending bill to combat the coronavirus. Days later a resident of his Florida district died from coronavirus, prompting some to suggest that he had made light of the risks. Mr. Gaetz denied that, saying he was making a serious point about the risk to lawmakers who interact with so many people.

Representative Doug Collins, Republican of Georgia, who toured the Centers for Disease Control and Prevention in Atlanta with Mr. Trump on Friday, likewise went into isolation on Monday after being told by the C.D.C. that he too had been spotted in a photograph with the infected person at the conference.

Mr. Collins was on the tarmac when Mr. Trump landed in Atlanta on Friday and shook the president’s hand before joining him on the tour of the C.D.C. “While I am not experiencing any symptoms, I have decided to self-quarantine out of an abundance of caution,” Mr. Collins wrote on his Twitter feed.

Mr. Trump started the day playing down the virus, reminding Americans that tens of thousands of people die of the ordinary flu every year. “Nothing is shut down, life & the economy go on,” he wrote on Twitter. “At this moment there are 546 confirmed cases of CoronaVirus, with 22 deaths. Think about that!”

He dismissed the impact of the outbreak in fueling Monday’s market meltdown, the worst since the financial crisis of 2008. “Saudi Arabia and Russia are arguing over the price and flow of oil,” he wrote. “That, and the Fake News, is the reason for the market drop!”

He even sought to cast the decline in oil prices in positive terms. “Good for the consumer, gasoline prices coming down!” he wrote.

The White House has debated how to proceed, with some advisers to the president advocating more aggressive action and others urging caution for fear of the economic impact. Senior officials engaged in spirited talks last week about whether to warn older Americans against traveling on cruise ships.

As those discussions intensified, at least eight members of the administration’s coronavirus task force, including those with medical backgrounds as well as Cabinet officials such as Steven Mnuchin, the Treasury secretary, and Alex M. Azar II, the health and human services secretary, recommended sending the cruise notice

But two senior White House officials — Joe Grogan, the head of the Domestic Policy Council, and Larry Kudlow, the president’s national economic adviser — argued that they should consider the effects of such a move on 150,000 jobs in Florida, where the tourism industry could be particularly hard hit, according to two senior administration officials. Ultimately the proponents of a notice won out and the State Department posted it on its website on Sunday.

The White House doctor who treats Mr. Trump has attended meetings related to the coronavirus, administration officials said, and monitored how many events are put on the president’s schedule.

He has cautioned against overloading Mr. Trump’s day to the point where he gets run down, according to one senior administration official, who added that the doctor has given such guidance in the past as well. Another official asserted that nothing out of the ordinary had been suggested by the doctor.

Mr. Trump has asked advisers whether he needs to reduce how many hands he shakes, but he has shown reluctance to change his habits — long before the current outbreak, he made a practice of slathering his hands with sanitizer once he finishes with crowds. At a closed-door fund-raiser at Mar-a-Lago on Sunday, he appeared to avoid shaking hands in video posted on social media, elbow bumping one guest instead. But on Monday, he made a point of shaking hands with supporters waiting for him at the Orlando airport.