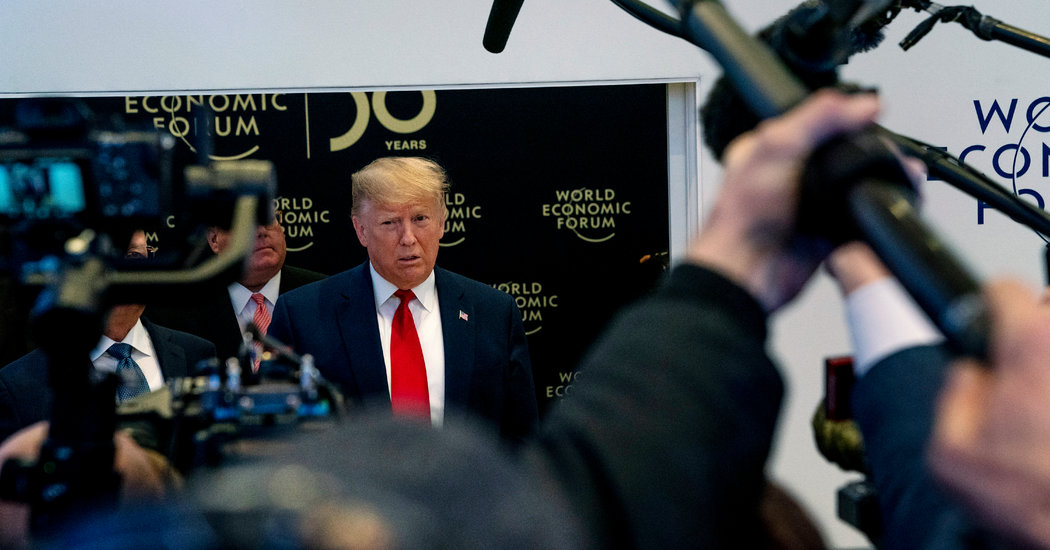 DAVOS, Switzerland — President Trump swept into this moneyed Alpine village on Tuesday, full of brio and flattery, schmoozing with global business leaders as if there were no talk of removing him from office and no impeachment trial unfolding 4,000 miles away in Washington.

Mr. Trump appeared to relish the escape offered by the World Economic Forum and the friendly — to his face, at least — crowd of elites in the snow-covered Alps. He was in a jovial mood, according to people who spoke with him, engaging in animated conversations with chief executives like Brian Moynihan of Bank of America, Sundar Pichai of Alphabet and Marc Benioff of Salesforce.

He congratulated them on their companies’ stock performances and joked that he should have bought shares but that he had been forced to sell his holdings when he took office. As Mr. Trump and his family members darted among meetings in makeshift pavilions, they studiously avoided questions about the drama back home, where the Senate engaged in a fierce clash over the rules for putting the president on trial.

It was a day of two presidents. There was the stick-to-the-script Donald J. Trump riding high on a strong economy and representing the country on the international stage. And there was the Donald J. Trump under siege back home, depicted as an autocrat abusing the power of his office to take down domestic opponents and win re-election.

The images of a calm and confident president in the wintry globalist getaway were supplanted in Washington by the images shown on television screens on the Senate floor by House managers playing video clips of his claims of unconstrained authority and his professed support for witnesses he has in fact blocked from testifying.

The president took the advice of aides and friends and tried to remain above it all, or at least appear like it, more like Bill Clinton in 1999. When reporters asked him about the impeachment trial, he swatted it away as “just a hoax.”

Leaving it at that, he proceeded to stick to his prepared remarks, making inflated claims about his role in a global economic recovery and promoting a message of the United States’ supremacy. “America’s economy was in a rather dismal state,” Mr. Trump said during a 30-minute speech to the world leaders and corporate titans gathered here. “Before my presidency began, the outlook for many economies was bleak.”

Although the economy’s recovery after its plummet was central to President Barack Obama’s legacy, Mr. Trump said that his administration had created a “roaring geyser of opportunity” and proclaimed that “the American dream is back bigger, better and stronger than ever before.”

Addressing a global audience, Mr. Trump delivered what amounted to a version of his campaign speech, speaking little of international alliances while playing up America’s dominance in the world.

At a conference that dedicated itself this year to climate change, Mr. Trump took a swipe at those demanding action. He announced that the United States would join an initiative to plant a trillion trees that was introduced at the event, but he also declared that “we must reject the perennial prophets of doom” and that it was “not a time for pessimism.”

Mr. Trump’s visit to Davos is his first foreign trip since Speaker Nancy Pelosi sent two articles of impeachment to the Senate and the first since he authorized the drone strike that killed Maj. Gen. Qassim Suleimani, Iran’s most powerful security commander. Many diplomats and analysts wondered if he would seem weakened abroad while his fate was being debated at home and how he would treat European leaders who have called his Iran strategy too provocative.

Even if he did not show it, Mr. Trump surely kept an eye on developments back home. He did shoot out one Twitter message shortly before the Senate trial opened for the day: “READ THE TRANSCRIPTS!” he wrote, referring to records of two phone calls he had with President Volodymyr Zelensky of Ukraine — transcripts that his critics have, in fact, read and consider evidence of misconduct even though he considers them “perfect.”

But he gave little impression of being absorbed by either issue, at least not publicly. Arriving in Switzerland on Tuesday morning, he flew on Marine One over the Alps, from Zurich to Davos. The altitude increased the sense that the bitter partisan fight that would take place in the Capitol was a world away.

As his motorcade made its way through twisty, snow-covered streets to the Davos Congress Center, nine Swiss tenors entertained the crowd with a version of “Ranz des vaches,” a mellifluous song for calling home cows — and a more peaceful serenade than the songs that typically precede Mr. Trump’s entrance at his rallies back home, like “Macho Man” by the Village People and “Sympathy for the Devil” by the Rolling Stones.

Mr. Trump was also a more mellow version of himself.

He highlighted the first phase of his trade deal with China and another with Mexico and Canada. And the audience appeared receptive, having warmed to him since he took office three years ago this week as they have benefited from his policies.

“Lev Parnas is not a topic of conversation at Davos,” said Ian Bremmer, the president and founder of Eurasia Group, a political research and consulting firm, referring to a possible Senate trial witness.

Still, television screens in Davos were filled with the face of a different Trump antagonist: the teenage climate activist Greta Thunberg, who was the other star speaker of the day. In her speech, she warned that “our house is still on fire” and that “inaction is fueling the flames by the hour.”

Mr. Trump, who dismissed Ms. Thunberg when she was named Time magazine’s person of the year, an honor he perennially covets, did not mention her by name in his own speech. But when he talked about the importance of clean water and clean air, he added that “fear and doubt is not a good thought process.”

His speech also included false or exaggerated claims that seemed, at times, disconnected from the concerns of an international audience.

“I saved H.B.C.U.s. We saved them,” Mr. Trump claimed, referring to historically black colleges and universities. “They were going out and we saved them.” Although the administration has increased investment in the schools by 14.3 percent, and although a number of them have struggled financially, there is no evidence that they were on the verge of extinction. In the past six years, one has closed and about 100 remain.

Hanging over the conference was the question of whether the president would try to stage a surprise meeting with Mr. Zelensky, even though officials said the optics would be unhelpful to Mr. Trump. The president’s trial centers on his efforts to coerce Mr. Zelensky to find incriminating information about former Vice President Joseph R. Biden Jr. and other Democrats.

In Davos, however, Mr. Trump may have found the right audience for support to counter the trial dominating the news at home. There was less anxiety about him rippling through the 1 percent set on Tuesday than when he originally attended the annual forum two years ago, fresh off an “America First” campaign filled with promises to rip up international agreements and alliances.

This time, there was more concern about some of the progressive Democrats running to replace him. Through regulatory rollbacks, tax cuts and the success of the global economy, the president who ran as a populist has benefited many of the chief executives gathered at the event, even those who have taken public positions against some of his policies.

“There are lot of masters of the universe who think he may not be their cup of tea, but he’s been a godsend,” said Mr. Bremmer of the Eurasia Group. “It’s interesting to hear Mike Bloomberg saying he would fund Bernie Sanders’s campaign if he won the nomination. Very few people here would say that.”

During Mr. Trump’s career in New York real estate, entertainment and business, he never cracked the Davos set, whose Fortune 500 chief executives dismissed him as something of a gaudy sideshow.

But the balance of power has shifted. And with progressives like Mr. Sanders and Senator Elizabeth Warren of Massachusetts emerging as top-tier possibilities for the Democratic presidential nomination, a crowd that once rejected Mr. Trump is now more willing to consider him one of its own.

On Tuesday, Mr. Trump happily embraced them back. After his speech, he met with the International Business Council, and personally greeted every chief executive, according to attendees.

The meeting was less about substance than socializing, one attendee said, as Mr. Trump grilled corporate leaders about whether they liked his speech. His daughter Ivanka Trump and his son-in-law, Jared Kushner, also worked the room.

Mr. Trump planned to meet separately with leaders of Iraq, Pakistan and the Kurdish regional government, as well as sit down with corporate chieftains.

Shortly afterward, Mr. Trump headed to dinner with the corporate executives. Given a soccer ball by the head of FIFA — “a very beautiful, good-looking ball,” Mr. Trump gushed — the president then lavished praise on his guests, “the greatest businessmen in the world.”

He drank in their praise in return, at the same moment that senators back home began debating how to try him for high crimes and misdemeanors.

The president’s staff was on message as well. When he introduced Larry Kudlow, his national economic adviser, Mr. Trump asked, “How’s the economy going?”

“He gave us the right answer,” Mr. Trump said approvingly.