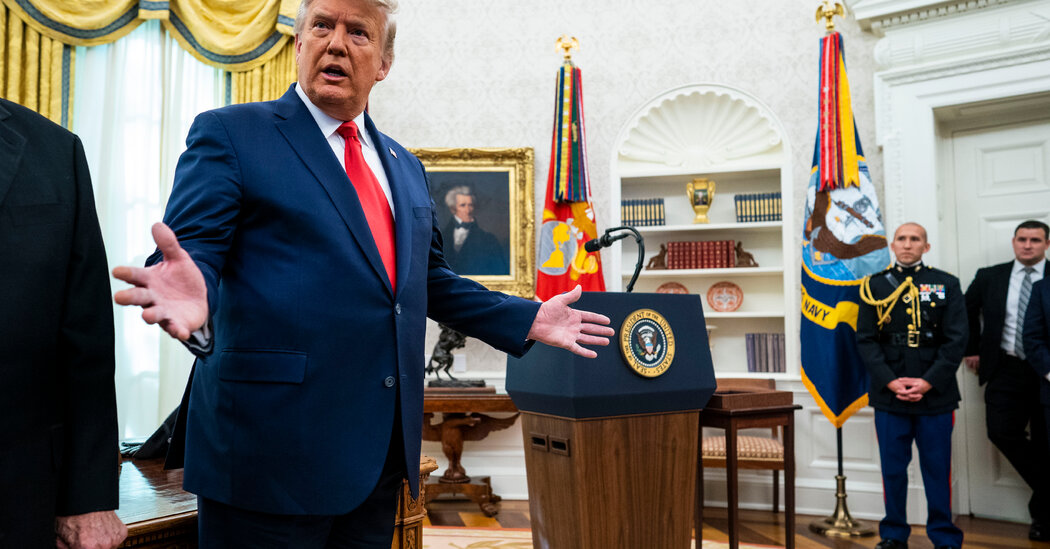 Even in defeat, President Trump continued to raise money at some of the fastest rates of the year, pulling in $207.5 million in the month since Election Day with the Republican National Committee as he has stoked unfounded fears of election fraud and made baseless claims to undermine the legitimacy of the election.

Mr. Trump’s campaign apparatus has continued to aggressively solicit donations under the guise of supporting his various legal challenges to the election of Joseph R. Biden Jr., but as of now 75 percent of donations go to to a new political action committee that Mr. Trump formed in mid-November and 25 percent to the Republican Party. Only if a donor gives more than $6,000 do those funds go to Mr. Trump’s formal “recount” account.

His campaign did not release a breakdown of how the $207.5 million was divided, with funds split between the new PAC, paying off his campaign debts, the R.N.C. and two committees operated jointly by the party and the campaign.

Mr. Trump, who has not formally conceded the 2020 race but has begun talking about running again in 2024, has repeatedly challenged the results in court with virtually no success.

In his statement, Mr. Stepien added that the money “also positions President Trump to continue leading the fight to clean up our corrupt elections process in so many areas around the country, and to build on gains from the 2020 elections so we can take back the House and build on our Senate majority in 2022.”

The Thursday announcement came on a final filing deadline of the 2020 race with the Federal Election Commission, which covers the period from Oct. 15 to Nov. 23. During that period, the R.N.C., Mr. Trump’s campaign and their shared committees raised a combined $495 million, campaign officials announced.

As of early evening, only the R.N.C. had filed its report, which showed it ended the period with $58.8 million cash on hand. As Mr. Trump has contested the results in multiple venues, the party had spent more than $6 million on legal bills, with $1.4 million going to the Jones Day law firm, $1.3 million to King and Spalding and more than $920,000 to Consovoy McCarthy.