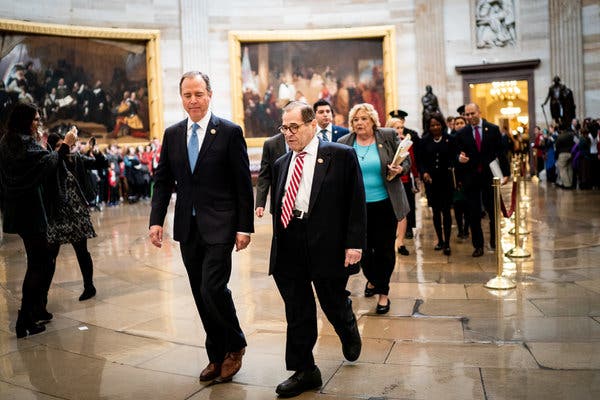 For Day 2 of their opening arguments, the House impeachment managers are focusing on the abuse-of-power charge against Trump.

The seven House impeachment managers, led by Representative Adam B. Schiff, Democrat of California, resumed oral arguments on Thursday and started to build out their legal case that President Trump abused the power of his office — one of two articles of impeachment against him.

The Democratic-led House also charged Mr. Trump with obstruction of Congress for preventing current and former Trump administration officials from testifying during the House inquiry and ignoring requests for relevant documents. Managers plan to address that charge on Friday.

At the start of Thursday’s session, the Democrats had 16 hours and 42 minutes left to convince Republican senators that Mr. Trump should be removed from office.

Representative Jerrold Nadler of New York, the chairman of the Judiciary Committee, which drafted the articles of impeachment, cited constitutional law experts who testified last year that Mr. Trump’s efforts to pressure President Volodymyr Zelensky of Ukraine rose to the level of impeachment.

“If what we are talking about is not impeachable, then nothing is impeachable,” Mr. Nadler said, echoing Michael J. Gerhardt, a constitutional law expert who testified in a House hearing in the fall.

Democrats called out one of Trump’s lawyers and a Republican senator for double talk.

Mr. Nadler worked on Thursday to undermine an argument from Mr. Trump’s defense team that a president can be impeached only for committing an ordinary crime, and that abuse of power does not qualify. While constitutional scholars have disputed that interpretation of the Constitution, Mr. Nadler chose to highlight past statements of two of Mr. Trump’s most prominent defenders.

Senators were shown a news clip featuring a member of Mr. Trump’s current defense team, Alan M. Dershowitz, from 1998, when President Bill Clinton was facing impeachment. In the clip, Mr. Dershowitz disputed the idea that a president needed to commit a “technical crime” to be impeached.

“It certainly doesn’t have to be a crime,” Mr. Dershowitz said at the time. “If you have somebody who completely corrupts the office of president and who abuses trust and who poses great danger to our liberty, you don’t need a technical crime.”

Mr. Dershowitz, a professor emeritus at Harvard Law School, offered a different view only days ago.

“Without a crime, there can be no impeachment,” he said Sunday on CNN. Mr. Dershowitz is expected to make the same argument when he takes to the Senate floor in the coming days.

The managers also went after Senator Lindsey Graham, Republican of South Carolina, with a clip from 1999, when he was an impeachment manager during Mr. Clinton’s trial.

“It’s just when you’re using your office in a way that hurts people, you’ve committed a high crime,” Mr. Graham said at the time.

Trump woke up in Washington for the first time since his trial started in earnest.

And while his afternoon is packed with travel, the president found time to continue to offer his own commentary as Mr. Nadler was addressing the Senate, suggesting that Mr. Trump was, indeed, watching the proceedings live.

The president is scheduled to travel to Florida this afternoon for the Republican National Committee’s winter meeting, set to be held at one of his family’s properties.