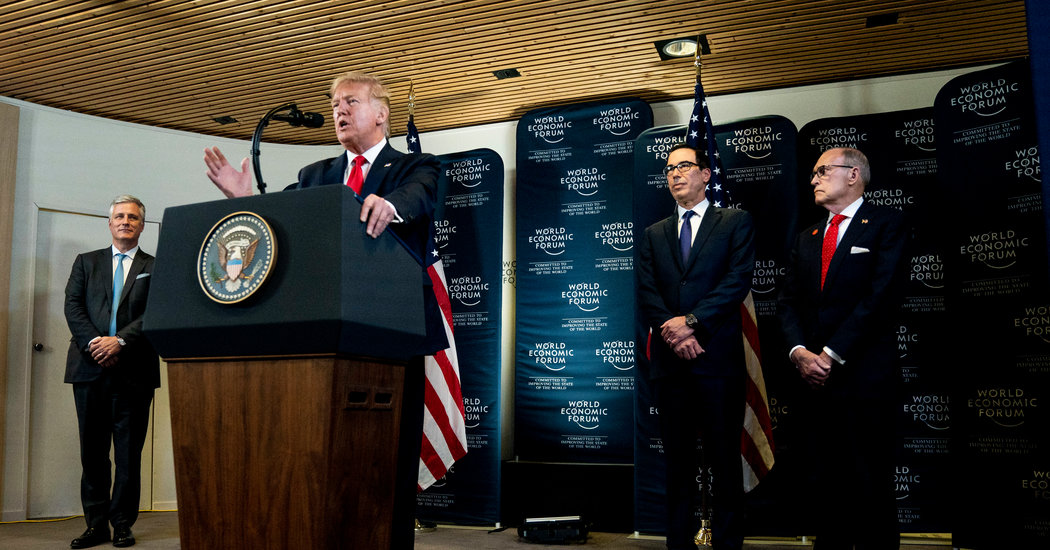 DAVOS, Switzerland — President Trump said on Wednesday that he would prefer a long impeachment trial with witness testimony before the Senate, but that national security concerns made that impossible, and added that he would like to attend the trial.

Mr. Trump unleashed on Democrats and the news media in a wide-ranging news conference before leaving Davos, where he met with business and government leaders from around the world, to return to Washington, where impeachment overshadows all else.

A day earlier, Mr. Trump managed to stick to a script about a strong United States economy while addressing a global audience at the World Economic Forum, and he largely swatted away any questions about the impeachment proceedings. But before leaving Switzerland, he called a last-minute news conference, during which he vented at length about his political enemies in Washington as some of his top economic advisers stood silently behind him.

Mr. Trump called Representative Jerry Nadler of New York a “sleaze bag” and referred to Representative Adam Schiff, the chairman of the House Intelligence Committee, as a “con job” and a “corrupt politician.”

The president referred to Mr. Schiff and the other House impeachment managers as “major sleaze bags” and said he would love to attend his own trial in order to “sit right in the front row and stare into their corrupt faces.” But he acknowledged that his lawyers would most likely advise him against doing so.

Mr. Trump’s comments ran counter to the actions of Senate Republicans, who have turned back Democrats’ attempts to subpoena documents and compel White House officials to testify in the impeachment trial. Mr. Trump claimed that he favored a drawn-out process that would allow witnesses like John Bolton, the former national security adviser; Mick Mulvaney, the acting chief of staff; and Secretary of State Mike Pompeo, but said that allowing them to testify would create “a national security problem.”

But Mr. Trump also expressed reservations about the idea of Mr. Bolton, whom he forced out in September, appearing as a witness because “you don’t like people testifying when they didn’t leave on good terms.” He said his break with Mr. Bolton was “due to me, not due to him.”

White House officials had hoped that the World Economic Forum would give the president an opportunity to highlight economic successes that they see as being supplanted at home by the impeachment investigations and, now, a trial.

Mr. Trump began the news conference on Wednesday by pointing out economic gains and claiming that “Davos has treated us beautifully.” But after a day of ignoring reporters’ questions, he appeared eager to discuss the impeachment proceedings.

He said that the White House would be right to assert executive privilege to block Mr. Bolton from testifying, even as he claimed he was open to hearing from his former adviser.

He cited an October appearance by Mr. Mulvaney on “Fox News Sunday” as the reason his testimony under oath was not necessary. “He’s really expressed himself very well when he did a Chris Wallace interview,” Mr. Trump said. “I think there’s not much to add.”

Mr. Trump appeared eager to defy expectations that he would pick a fight with another high-profile guest at the conference, the 17-year-old climate activist Greta Thunberg, whom he has criticized in the past.

“She beat me out on Time magazine,” Mr. Trump said, referring to her being named Time’s person of the year in December.

“I would have loved to have seen her speak,” he said, but he recommended she “start working on those other countries,” because “our water numbers, our numbers on air, are tremendous.”

Mr. Trump also launched a broadside against the news media, even as he congratulated an NBC News television correspondent, Kristen Welker, on a promotion and hinted that he might be willing to appear on her show. “If we could straighten out the press in our country, we would have a place that would be so incredible,” he said.

Mr. Trump also insisted that his side of the story was the easy one to explain, and that he was simply a target because of his own success. “I’m honest,” he said. “I make great deals.”