Since he took office, President Trump and his advisers have made a show of trying to chip away at the overwhelming support that Democrats enjoyed from black voters in the 2016 presidential campaign.

Even as Mr. Trump himself has offended people with language widely seen as racist, like telling four congresswomen of color to “go back” to countries where they came from (three of them were born in the United States), his campaign poured $10 million into a Super Bowl ad featuring a black woman and highlighting the administration’s efforts on criminal justice reform. Trump advisers held events at the White House celebrating Mr. Trump’s support for historically black colleges. The advisers sought to turn the low unemployment rate into a selling point to African-American voters, claiming they had more opportunities for jobs with higher wages.

And most recently, the president’s re-election campaign has been holding weekly online gatherings titled “Black Voices for Trump” where African-American surrogates advertise his record.

But these efforts to gain more black support, if only marginally, have now run into one of the grimmest realities of the coronavirus: It is killing African-Americans at disproportionately high rates, and depriving them of jobs in high numbers as well.

Mr. Trump has only fleetingly addressed the virus’s outsize impact on black Americans, and made no apparent effort to aggressively tackle the racial disparities, even as he continues his online appeals to black voters. Taken together, his lack of response, combined with political overtures, have cast into sharper relief his insensitivity about the unique concerns facing black Americans.

A CNN poll released on Tuesday shed light on the challenge Mr. Trump faces with black voters. About 54 percent of black adults reported knowing someone who had tested positive for Covid-19, according to the poll. That was in contrast to 38 percent of white adults and 36 percent of Latino adults.

In the survey, 79 percent of black respondents said the federal government had done a bad job trying to contain the virus. That was compared with 50 percent of white respondents and 55 percent of Latino respondents.

Mr. Trump won just 8 percent of African-American voters four years ago with a bleak message to minority voters — “What do you have to lose?” He remains deeply unpopular with black voters, so his appeal to win them over has been a game of inches. He is not looking for an outright victory among them, but simply to do better than he did last time.

Jared Kushner, the president’s son-in-law and senior adviser, has pushed the efforts in the hope that even if Mr. Trump could increase his share of the black vote by as little as two percentage points, it could make a difference in the November election’s final outcome. Republicans and some Democrats privately see those efforts as aimed at reassuring suburban white voters who may not feel comfortable supporting Mr. Trump because of his divisiveness related to race.

Yet the presumptive Democratic nominee, Joseph R. Biden Jr., has deep support among black voters, in part because of his fierce loyalty as the No. 2 to former President Barack Obama. Black voters turned out in fewer numbers in the 2016 election than when Mr. Obama was on the ticket; Democrats hope that Mr. Biden, combined with anger at Mr. Trump after four years, will raise black voter turnout. 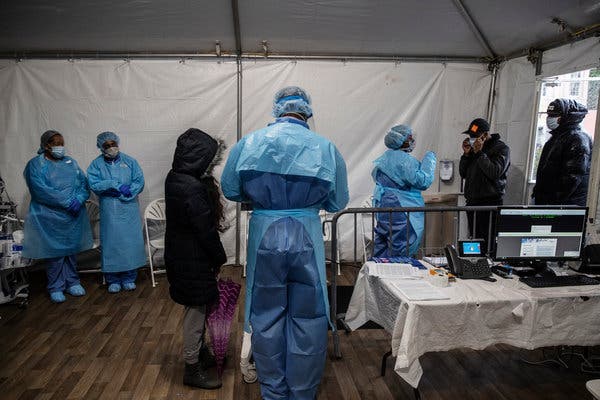 Hospital workers screening patients for the coronavirus at a tent outside Brooklyn Hospital Center in March. The virus has hit black and Latino Americans especially hard. Credit…Victor J. Blue for The New York Times

“The disproportionate impact of Covid-19 crisis is only having the effect of increasing people’s disdain and distrust of Trump and the entire administration,” said Adrianne Shropshire, the executive director of BlackPAC, a super PAC focused on African-American Democrats. Referring to Mr. Trump, she said the group’s tracking poll had shown that black voters “do not trust him to be honest and they don’t expect to get accurate information from him. The impact is intensifying people’s dislike and distrust.”

In the year before the pandemic hit, what the campaign lacked in a concerted political strategy, it tried to make up for with tactics, starting with a “Black Voices for Trump” coalition that the president himself kicked off in November and continuing with plans to open Trump campaign storefronts in black neighborhoods in critical states like Florida and Pennsylvania. Campaign officials encouraged black voters to connect with the Trump operation by texting the word “woke” to its main number. Campaign officials even conducted polling to test the word “black” versus the term “African-American,” an official said, and concluded that black voters responded better to being referred to as “black.”

But Mr. Trump has lost most of his arguments as the economy has cratered.

What’s more, Mr. Trump has recently returned to aggressive attacks against his predecessor, Mr. Obama, whose approval rating remains higher than Mr. Trump’s. The president has repeatedly tweeted “Obamagate,” referring obliquely to some unnamed scandal or crime, and sought to directly tie Mr. Obama to the abandoned prosecution of Mr. Trump’s first national security adviser, Michael T. Flynn. It’s a strategy that could help fire up his base, but it risks further alienating black voters, as well as independent voters more broadly.

Some of Mr. Trump’s advisers believe that there isn’t a downside in attacking Mr. Obama, who is vastly more popular than Mr. Biden. They argue that Mr. Trump challenged Mr. Obama’s record throughout the 2016 campaign, and they take Mr. Trump’s victory as affirmation of his approach.

But the president is now attacking Mr. Obama’s integrity, not just his policies, a move that makes some of Mr. Trump’s advisers anxious. In a survey of voters in 17 battleground states commissioned by the Republican National Committee in March, Mr. Obama was deeply popular, especially compared with current elected officials. Sixty percent of respondents said they viewed Mr. Obama favorably, compared with 36 percent who said they saw him negatively, according to a person briefed on the data.

Meanwhile, Mr. Trump’s advisers are cognizant that the virus is harming some of the black voters to whom the president had hoped to sell himself as the person who would help build a better economic life.

Mr. Trump has acknowledged the divide, telling reporters in April, “We’re doing everything in our power to address this challenge.” He added that black people were “getting hit very, very hard,” and that he had told the housing and urban development secretary, Ben Carson, to respond to those communities.

White House officials said their internal numbers showed that Mr. Trump’s support had not wavered dramatically over the past two months, despite public polling that indicates otherwise. And they said they were counting on an economic comeback to make the case for them with black voters before November.

Paris Dennard, an advisory board member for Black Voices for Trump, pointed out that HUD had prevented foreclosures and evictions for a period of time.

“You have to remember it was going to be disproportionately impacting communities of color no matter who was the president,” Mr. Dennard said. “The health disparities that plagued the black community predate President Trump, President Obama and President Bush.”

Still, the disparities remain. And the president’s eagerness to fight with reporters during events that could otherwise be used to calm the anxious public or provide real-time information has only highlighted his leadership deficiencies. For instance, Mr. Trump was widely criticized on Monday after he responded “ask China” to a Chinese-American reporter trying to pose a question to him.

Some Democratic strategists suggested that Mr. Biden and his supporters need to do more to highlight that aspect of Mr. Trump’s failure in the coronavirus response.

“Democrats better be messaging and putting in an agenda that actually speaks to these glaring inequities,” said Cornell Belcher, a progressive pollster who recently worked for Michael R. Bloomberg’s failed presidential campaign.

Mr. Belcher also argued that there was a bigger benefit to Mr. Trump’s efforts to attack Mr. Obama than Democrats might realize.

“If your candidacy is based on or grounded in a sense of white voters’ resentment and angst in the changing America, Barack Obama is a much better character in that play than Joe Biden is,” Mr. Belcher said.