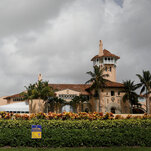 The lawyer signed a statement in June that all documents marked as classified and held in boxes in storage at Mar-a-Lago had been given back. The search at the former president’s home on Monday turned up more.

At least one lawyer for former President Donald J. Trump signed a written statement in June asserting that all material marked as classified and held in boxes in a storage area at Mr. Trump’s Mar-a-Lago residence and club had been returned to the government, four people with knowledge of the document said.

The written declaration was made after a visit on June 3 to Mar-a-Lago by Jay I. Bratt, the top counterintelligence official in the Justice Department’s national security division.

The existence of the signed declaration, which has not previously been reported, is a possible indication that Mr. Trump or his team were not fully forthcoming with federal investigators about the material. And it could help explain why a potential violation of a criminal statute related to obstruction was cited by the department as one basis for seeking the warrant used to carry out the daylong search of the former president’s home on Monday, an extraordinary step that generated political shock waves.

It also helps to further explain the sequence of events that prompted the Justice Department’s decision to conduct the search after months in which it had tried to resolve the matter through discussions with Mr. Trump and his team.

An inventory of the material taken from Mr. Trump’s home that was released on Friday showed that F.B.I. agents seized 11 sets of documents during the search with some type of confidential or secret marking on them, including some marked as “classified/TS/SCI” — shorthand for “top secret/sensitive compartmented information.” Information categorized in that fashion is meant to be viewed only in a secure government facility.

The search encompassed not just the storage area where boxes of material known to the Justice Department were being held but also Mr. Trump’s office and residence. The search warrant and inventory unsealed on Friday did not specify where in the Mar-a-Lago complex the documents marked as classified were found.

Mr. Trump said on Friday that he had declassified all the material in his possession while he was still in office. He did not provide any documentation that he had done so.

In an appearance on Fox News on Friday night, the right-wing writer John Solomon, whom Mr. Trump has designated as one of his representatives to interact with the National Archives, read a statement from the former president’s office claiming that Mr. Trump had a “standing order” during his presidency that “documents removed from the Oval Office and taken to the residence were deemed to be declassified the moment he removed them.”

A spokesman for the former president, Taylor Budowich, said on Saturday, “Just like every Democrat-fabricated witch hunt previously, the water of this unprecedented and unnecessary raid is being carried by a media willing to run with suggestive leaks, anonymous sources and no hard facts.”

The warrant said F.B.I. agents were carrying out the search to look for evidence related to possible violations of the obstruction statute as well as the Espionage Act and a statute that bars the unlawful taking or destruction of government records or documents. No one has been charged in the case, and the search warrant on its own does not mean anyone will be.

More Coverage of the F.B.I. Search of Trump’s Home

Last year, officials with the National Archives discovered that Mr. Trump had taken a slew of documents and other government material with him when he left the White House at the end of his tumultuous term in January 2021. That material was supposed to have been sent to the archives under the terms of the Presidential Records Act.

Mr. Trump returned 15 boxes of material in January of this year. When archivists examined the material, they found many pages of documents with classified markings and referred the matter to the Justice Department, which began an investigation and convened a grand jury.

In the spring, the department issued a subpoena to Mr. Trump seeking additional documents that it believed may have been in his possession. The former president was repeatedly urged by advisers to return what remained, despite what they described as his desire to continue to hold onto some documents.

Learn more about our process.

In an effort to resolve the dispute, Mr. Bratt and other officials visited Mar-a-Lago in Palm Beach, Fla., in early June, briefly meeting Mr. Trump while they were there. Two of Mr. Trump’s lawyers, M. Evan Corcoran and Christina Bobb, spoke with Mr. Bratt and a small number of investigators he traveled with, people briefed on the meeting said.

Mr. Corcoran and Ms. Bobb showed Mr. Bratt and his team boxes holding material Mr. Trump had taken from the White House that were being kept in a storage area, the people said.

A short time after the meeting, according to people briefed on it, Mr. Bratt sent Mr. Corcoran an email telling him to get a more secure padlock for the room. Mr. Trump’s team complied.

The Justice Department also subpoenaed surveillance footage from Mar-a-Lago recorded over a 60-day period, including views from outside the storage room. According to a person briefed on the matter, the footage showed that, after one instance in which Justice Department officials were in contact with Mr. Trump’s team, boxes were moved in and out of the room.

That activity prompted concern among investigators about the handling of the material. It is not clear when precisely the footage was from during the lengthy back-and-forth between Justice Department officials and Mr. Trump’s advisers, or whether the subpoena to Mr. Trump seeking additional documents had already been issued.

Mr. Budowich said it was “no surprise that boxes may be moved in and out of a storage room.”

“That’s not news,” he said. “If there was actual concern, the D.O.J. could have asked, just like they had previously, and they would have, again, received full cooperation.”

In recent months, investigators were in contact with roughly half a dozen of Mr. Trump’s current aides who had knowledge of how the documents that had been kept at Mar-a-Lago were handled, two people briefed on the approaches said. At least one witness provided the investigators with information that led them to want to further press Mr. Trump for material, according to a person familiar with the inquiry.

Concern about Mr. Trump’s cavalier handling of classified information dates back to the early days of his administration. When Mr. Trump left office, President Biden quickly took the extraordinary step of barring him from receiving the intelligence briefings traditionally provided to former presidents, saying that Mr. Trump could not be trusted because of his “erratic behavior.”

The security of classified information at Mar-a-Lago was also a concern for government officials even while Mr. Trump was in office. During his presidency, the government built what is known as a SCIF — a sensitive compartmented information facility — for Mr. Trump’s use while he was at the club.

Expressing alarm about the documents that were retrieved from Mar-a-Lago, the leaders of two House committees on Saturday called on Avril D. Haines, the director of national intelligence, to conduct an “immediate review and damage assessment” and provide a classified briefing to Congress about the potential harm done to national security.

“Former President Trump’s conduct has potentially put our national security at grave risk,” the committee leaders, Representatives Carolyn B. Maloney, Democrat of New York and the chairwoman of the Oversight Committee, and Adam B. Schiff, Democrat of California and the chairman of the Intelligence Committee, wrote to Ms. Haines.

On Thursday, Attorney General Merrick B. Garland made a public statement saying he had personally authorized the decision to seek the search warrant for Mr. Trump’s property, and he indicated that the Justice Department would have made such a move only after trying less invasive measures.

Shortly before Mr. Garland made the announcement, a person close to Mr. Trump reached out to a Justice Department official to pass along a message from the former president to the attorney general. Mr. Trump wanted Mr. Garland to know that he had been checking in with people around the country and found them to be enraged by the search.

The message Mr. Trump wanted conveyed, according to a person familiar with the exchange, was: “The country is on fire. What can I do to reduce the heat?”

The following day, as a judge unsealed the warrant and the inventory of items that the F.B.I. took, Mr. Trump alternately claimed he did nothing wrong and also made the baseless statement that officials may have planted evidence at his property during the search.