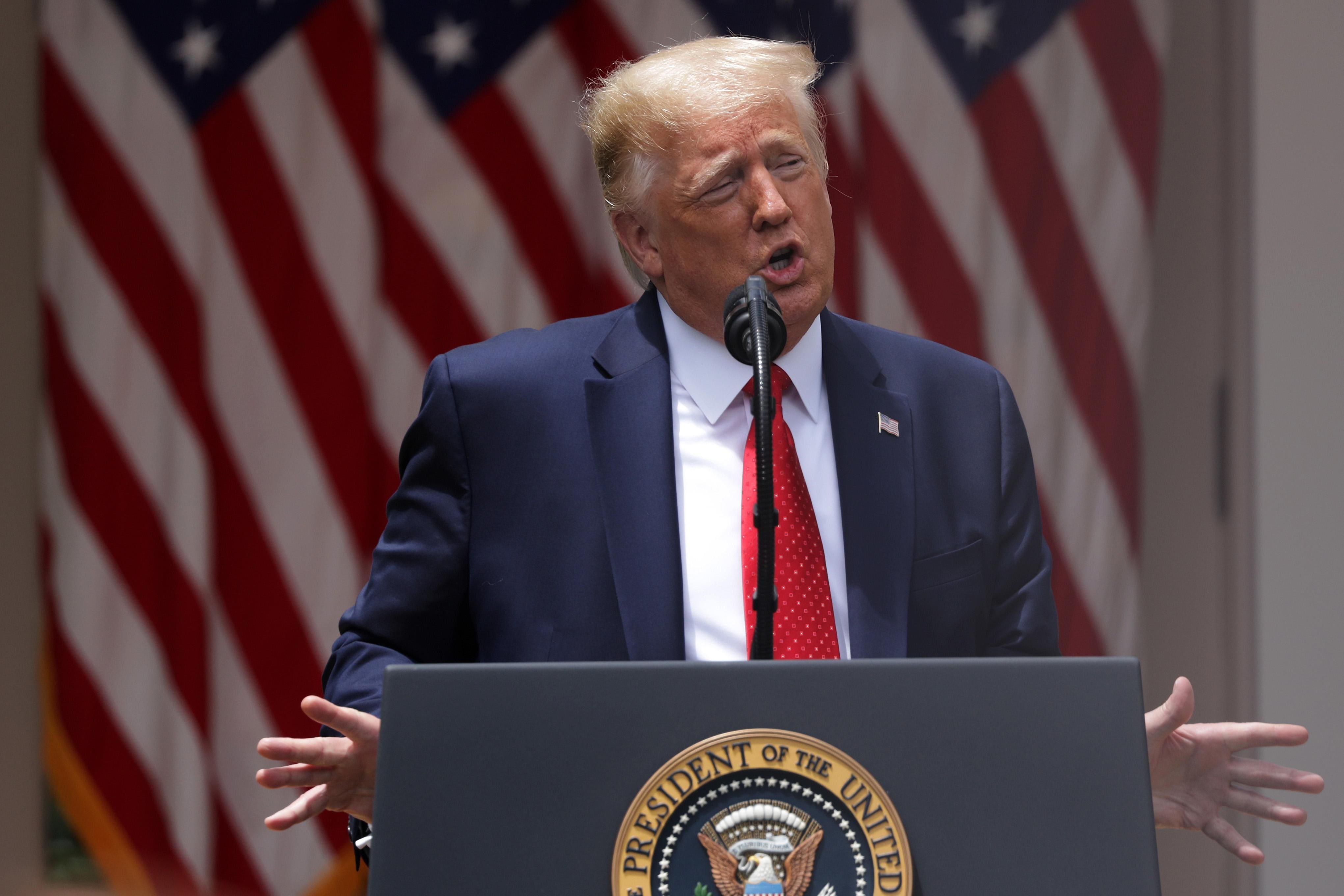 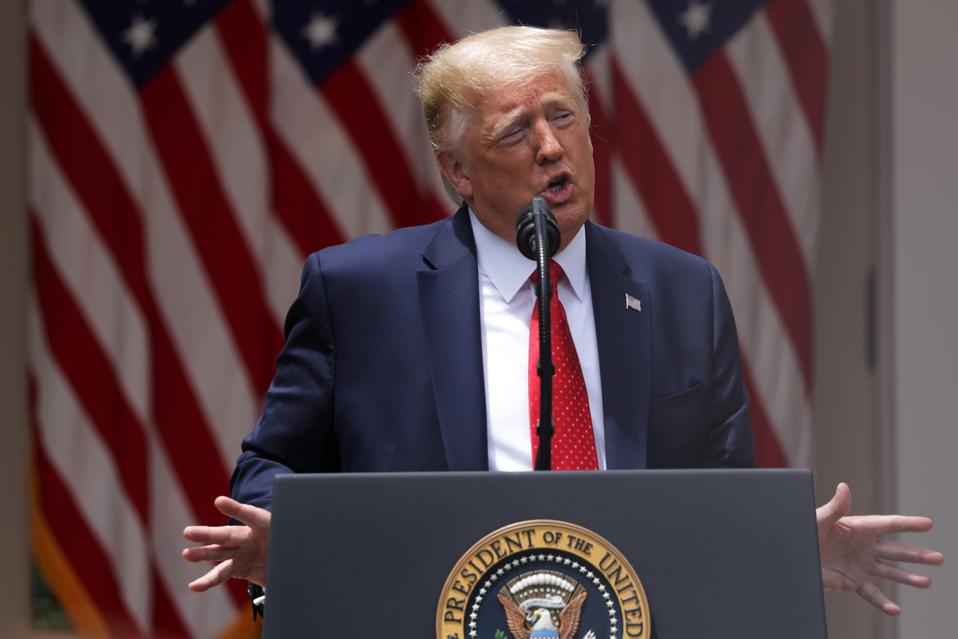 When talking about Covid-19 vaccine development efforts during a press conference today at the Rose … [+] Garden, U.S. President Donald Trump mentioned that “they’ve come up with the AIDS vaccine.” There was one major problem with the statement. (Photo by Alex Wong/Getty Images)

Today, at a press conference in the Rose Garden, President Donald Trump said, “They’ve come up with the AIDS vaccine.”

That would be great news. Except, that it’s not. Because there is currently no AIDS (acquired immune deficiency syndrome) vaccine available to humans. At least not in 2020, on planet Earth, in this Universe, and in this dimension.

Perhaps to make it clearer that these “things” were actually significant advances (as opposed to something like strapping a washboard to a llama), Trump gave an example of a thing that scientists and doctors have supposedly already developed. That’s when the “they’ve come up with the AIDS vaccine” thing came up, as seen in this Bloomberg Quick Take News video:

Well, that would be news to people who are still working on developing things such as vaccines against HIV, which stands for human immunodeficiency virus, the cause of AIDS. One of the scientists or doctors that Trump deals with very, very closely probably should have told him, “Mr. President, you know when you plan on saying, ‘they’ve come up with the AIDS vaccine’? Don’t. Just don’t.”

That’s because the AIDS vaccine is not the greatest example of a thing, since it really isn’t a thing yet. Back in December, I wrote for Forbes about the possibility of an HIV vaccine being available in 2021 due to some vaccine candidates entering later phase clinical trials. Since then unfavorable results led to the stoppage of one of these trials, as a press release from UNAIDS in February 2020 revealed. This may make the 2021 goal less likely to be achieved and may mean that the world may have to wait even longer for a vaccine that researchers have been trying to develop since 1984.

In this National Institute of Allergy and Infectious Diseases (NIAID) video, Anthony Fauci, MD (you know the Director of the NIAID and the guy whom Brad Pitt played on Saturday Night Live) explained why developing an HIV vaccine has been so difficult:

In general, it’s not a good idea to use something that doesn’t yet exist to show what you have accomplished. For example, don’t put on your resume jobs that you haven’t really had yet, such as “Space Force Ship Captain” or “five-term U.S. President.” Instead, choose a real accomplishment that has already occurred. Scientists and doctors have invented many things. Trump could have selected one of a number of vaccines that already exist such as the rotavirus, hepatitis B, or human papilloma virus (HPV) vaccines.

Perhaps Trump realized shortly after the words “come up with the AIDS vaccine” had left his mouth that there may indeed be no available vaccine against AIDS. Or against “the AIDS,” for that matter. That may be why his next words were, “They have come up — or the AIDS. And, as you know, there’s various things and now various companies are involved, but the therapeutic for AIDS. AIDS was a death sentence. Now people will live a life with a pill. It’s an incredible thing.”

Incredible, indeed. Not exactly a “four score and seven years ago” speech.

Again, there is no AIDS vaccine currently available. There are medications, such as Truvada and Descovy, that you can take every day if you are at higher risk for catching HIV. This is considered pre-exposure prophylaxis (or PrEP) against HIV infections. These medications are not the same as a vaccine. They don’t act the same way. They don’t stimulate your immune system to protect you against HIV. Although these medications can be highly effective at blocking the virus from making more copies of itself, once you stop taking PrEP you are no longer protected if the virus enters your body. PrEP can be much more expensive than a vaccine too, with Truvada potentially costing around $2,000 a month in the U.S., according to an article in Healthline. 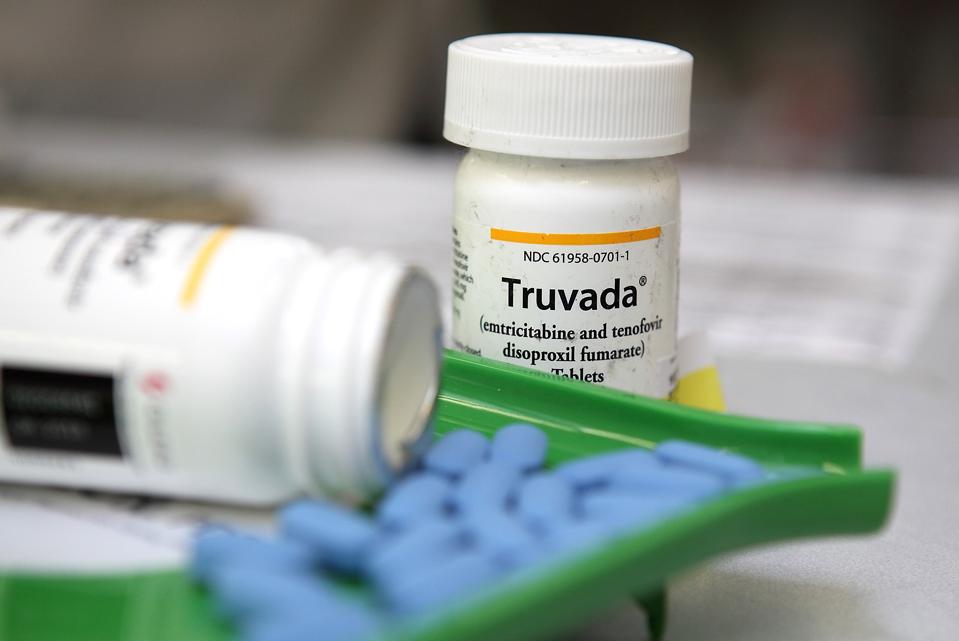 Antiretroviral drug Truvada can significantly reduce the risk of contracting HIV but it is not a … [+] vaccine. (Photo Illustration by Justin Sullivan/Getty Images)

If you say, “so the President accidentally said, ‘they’ve come up with the AIDS vaccine,’ what’s the big deal,” keep in mind that this isn’t just some stranger at the local Chuck E. Cheese. This is the President. People listen to what the President says.

It is important to make it very clear that no AIDS vaccine exists. Otherwise, people may go seeking this non-existent vaccine, making them more susceptible to vaccine scams. Moreover, they may not take proper precautions, incorrectly believing that AIDS is a vaccine-preventable disease like the measles or the mumps. There also may not be the same urgency to get an AIDS vaccine developed.

Speaking of vaccine development, until more scientific evidence emerges, don’t expect a “very successful vaccine, therapeutic, and cure,” for the Covid-19 coronavirus to be available by the end of 2020. The Covid-19 vaccine development efforts may be called “Operation Warp Speed,” but it shouldn’t be “Operation Warped Speed” or “Operation On Speed.” Vaccines typically take years (at least three to five years) to develop. There is no guarantee that a vaccine against the Covid-19 coronavirus will ever be developed. Coming up with a safe, reliable, and effective vaccine within a year of identifying a new virus would be unprecedented.

It could happen. However, in some ways, vaccine development is like sex. You don’t want to rush it. You don’t know what challenges you may have until it happens. The end result may not be what you expected. Crying may be involved. And you don’t want to keep saying how great it will be until it actually occurs.

The key in both cases is to temper expectations. There should be no premature congratulations. An initial vaccine, should it reach the market, may not even be that effective. Inappropriately rushing a vaccine through clinical trials could result in a vaccine that either doesn’t work, or worse, is dangerous.

When it comes to Covid-19 vaccine possibilities or any vaccine for that matter, listen to scientists and doctors, you know the people with those minds. Wait until real, peer-reviewed scientific information comes out about the vaccine candidates before making any predictions about the vaccines. After all, you don’t want someone to say that “they’ve come up with the Covid-19 vaccine,” before it really has happened.