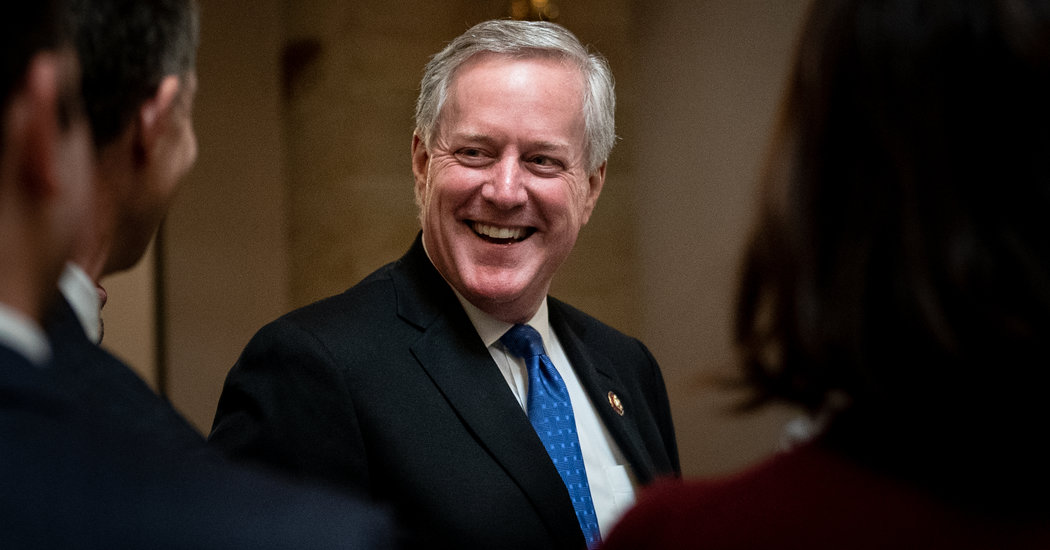 WEST PALM BEACH, Fla. — President Trump on Friday pushed out Mick Mulvaney, his acting White House chief of staff, and replaced him with Representative Mark Meadows, a stalwart conservative ally, shaking up his team in the middle of one of the biggest crises of his presidency.

Mr. Trump announced the change on Twitter after arriving in Florida for a weekend at his Mar-a-Lago estate, choosing to make one of the most significant switches he can make in his White House on a Friday night when most of the country had tuned out news for the weekend. As a consolation prize, the president named Mr. Mulvaney a special envoy for Northern Ireland.

I am pleased to announce that Congressman Mark Meadows will become White House Chief of Staff. I have long known and worked with Mark, and the relationship is a very good one….

Mr. Trump’s decision to push out Mr. Mulvaney came as the president confronted a coronavirus outbreak that has unsettled much of the country, threatened the economy and posed a new challenge to his re-election campaign. But the decision was seen as a long-delayed move cleaning up in the aftermath of the Senate impeachment trial as he shuffles his inner circle for the eight-month sprint to Election Day.

Mr. Trump called Mr. Meadows on Thursday to offer him the job, according to a person familiar with the discussion. Mr. Mulvaney, who took an annual trip to Nevada this week, learned of the decision on Friday, another person familiar with the events said. Mr. Mulvaney did not travel with Mr. Trump to Florida; instead, he sent his top deputy, Emma Doyle.

The replacement was widely seen in the West Wing as a chance for the president to reinvigorate his staff, over which Mr. Mulvaney was seen as losing control. In Mr. Meadows, Mr. Trump will have an ally whom he has treated as a confidant and a bellwether of congressional conservatives for much of his term.

Mr. Meadows, a founder of the conservative House Freedom Caucus, has been one of the president’s most vocal supporters, fiercely advocating his agenda on Capitol Hill and serving as one of Mr. Trump’s most ardent defenders during the House impeachment inquiry and Senate trial.

First elected in 2012, Mr. Meadows announced in December that he did not plan to seek re-election, hinting at the time that he might work for Mr. Trump in some capacity. “My work with President Trump and his administration is only beginning,” he said.

But both he and the president have been coy, refusing to say whether Mr. Meadows might join the re-election campaign in a senior position or take a top job at the White House. In response to speculation that he might become chief of staff, Mr. Meadows repeatedly demurred.

For months, Mr. Meadows — who served on the House Committee on Oversight and Government Reform, which led many of the investigations into Mr. Trump’s administration — was a ubiquitous face on television arguing forcefully that the president had done nothing wrong. Those appearances helped cement his relationship with Mr. Trump.

The president soured on Mr. Mulvaney long ago but was warned by advisers not to get rid of him until after his trial in the Senate, which ended with his acquittal on Feb. 6. Throughout the impeachment battle, Mr. Mulvaney was at near-open war with the White House counsel Pat A. Cipollone, who at one point was seen as a potential successor as chief of staff.

Mr. Mulvaney was a central player in Mr. Trump’s campaign to pressure Ukraine to announce investigations into former Vice President Joseph R. Biden Jr. and other Democrats. At one point, Mr. Mulvaney publicly contradicted the president’s version of events. Yet he followed Mr. Trump’s orders to defy a House subpoena to testify and was never called by the Senate.

Mr. Mulvaney, 52, a former Republican congressman from South Carolina, was the third person to run Mr. Trump’s White House in three years and served in that role for more than 14 months in an “acting” capacity without ever formally being given the title. No president has had four chiefs of staff in such a short amount of time, underscoring the record turnover that has marked Mr. Trump’s West Wing since he took office.

In testimony to House investigators, current and former administration officials placed Mr. Mulvaney at the heart of the events that led to the impeachment inquiry that threatened Mr. Trump’s presidency. Mr. Mulvaney carried out Mr. Trump’s order to suspend the aid to Ukraine in July without explanation even though it had been approved by Congress, an action later declared illegal by the Government Accountability Office.

At the news briefing in October, Mr. Mulvaney undercut the president’s denial that he had imposed a quid pro quo on the assistance to benefit his own political fortunes. Mr. Mulvaney told reporters that the White House withheld aid to Ukraine in part to force Kyiv to commit to investigating a widely debunked theory that Ukraine intervened in the 2016 presidential election on behalf of the Democrats, a story that American intelligence agencies have called Russian disinformation.

“Did he also mention to me in passing the corruption related to the D.N.C. server?” Mr. Mulvaney asked, referring to a Democratic National Committee computer server that was supposedly hidden in Ukraine. “Absolutely. No question about that.” He added, “That’s why we held up the money.”

Later that afternoon, Mr. Mulvaney issued a written statement trying to take it back. “Let me be clear, there was absolutely no quid pro quo between Ukrainian military aid and any investigation into the 2016 election,” he wrote.

The conflicting statements bolstered Democratic critics, who accused Mr. Trump of abusing his office, and dismayed the president’s Republican defenders, who were relying on his assurances that the aid suspension was not tied to his demands that Ukraine investigate Democrats. House managers prosecuting Mr. Trump in the Senate played Mr. Mulvaney’s comments from the briefing repeatedly as part of their case.

Fiona Hill, a former White House aide, told House investigators last fall that Mr. Mulvaney had been involved in arranging a White House visit for President Volodymyr Zelensky of Ukraine that was tied to whether he would conduct the investigations sought by Mr. Trump and his personal lawyer Rudolph W. Giuliani. She testified that Mr. Mulvaney was working with Gordon D. Sondland, who was then the ambassador to the European Union.

John R. Bolton, then the national security adviser, was alarmed at the machinations and ordered Ms. Hill to report the matter to a White House lawyer. “I am not part of whatever drug deal Sondland and Mulvaney are cooking up,” Mr. Bolton told her to tell the lawyer.

Mr. Trump never invested in Mr. Mulvaney enough to take away the “acting” in front of his title, even though Mr. Mulvaney actually served in the corner office more than twice as long as Reince Priebus, the president’s first chief of staff. Mr. Mulvaney brushed off the snub by telling people that everyone in Mr. Trump’s White House was effectively in the job on an acting basis, but the seeming lack of faith or respect invariably made it harder for him to impose authority.

Unlike his predecessor, John F. Kelly, a retired Marine general who left in late 2018, Mr. Mulvaney made a point of not trying to control the famously mercurial president and instead let Mr. Trump be Mr. Trump. Mr. Kelly said in October, as the House was pursuing its impeachment inquiry, that he had previously warned the president that such an approach would get him in trouble.

“I said, whatever you do, don’t hire a ‘yes man,’ someone who won’t tell you the truth — don’t do that,” Mr. Kelly said at a political summit hosted by The Washington Examiner in Sea Island, Ga. “Because if you do, I believe you will be impeached.”

Like others who later came to serve Mr. Trump, Mr. Mulvaney viewed the presidential candidate critically during the 2016 campaign, calling him “a terrible human being,” only to toss aside his reservations after the election. A leader in the House of the conservative Tea Party movement, Mr. Mulvaney was initially tapped to direct the Office of Management and Budget for Mr. Trump.

In that role, he helped enact $1.5 trillion in tax cuts, the president’s signature legislative victory, and rolled back environmental and other regulations. But he was frustrated in his attempts to pare back spending and wound up presiding over a period of rocketing budget deficits that are projected to top $1 trillion a year for the next decade.

During his time as acting chief of staff, the economy remained strong and by the end of his tenure, Mr. Trump’s approval rating had risen to 49 percent in Gallup’s poll, the highest of his presidency.

He recently told an audience in Britain that he regularly conflicted with the president over various decisions but made a point of keeping that private. “I disagree with the president every single day,” he said. “You just don’t hear about it — that’s not my job.”