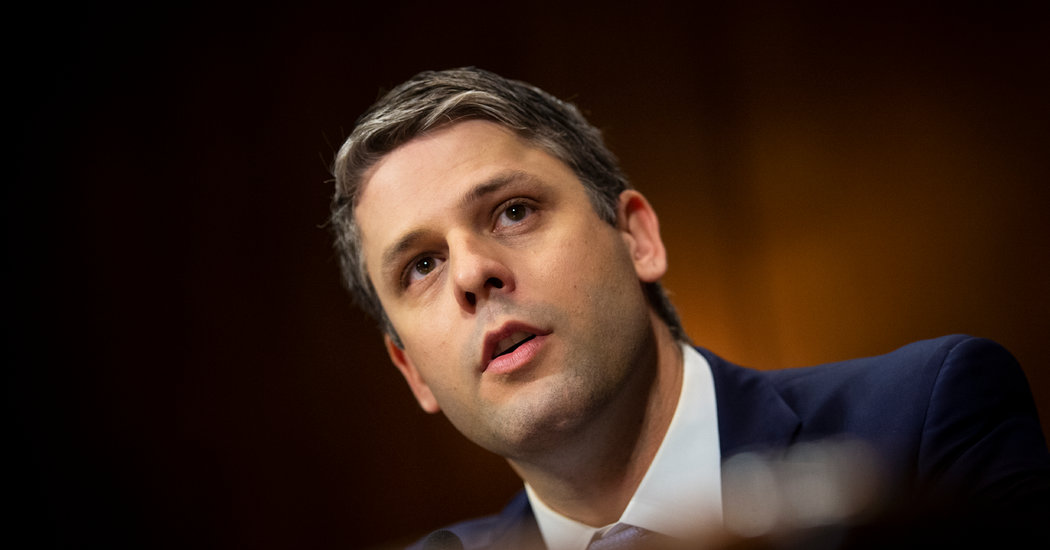 As the Senate this week considers elevating a politically connected judge to an influential federal appeals court, the judge has stepped into a fierce ideological debate about a legal group shaping President Trump’s rightward overhaul of the judiciary.

The judge, Justin Walker of the U.S. District Court in Kentucky, has joined more than 200 federal judges — a majority of them appointed by Mr. Trump — in signing a letter that defends their right to be affiliated with the group, the Federalist Society.

The letter, a copy of which was obtained by The New York Times, was written in March in response to a proposal by the ethics advisory arm of the federal judiciary that would block membership in the conservative group because of perceived bias.

The ethics panel, composed of judges appointed by both Democratic and Republican presidents, suggested membership in the society could “call into question the affiliated judge’s impartiality.” The panel also proposed banning membership in a liberal legal group, the American Constitution Society, which was founded as a counterweight to the Federalist Society and had influence in the Obama administration.

“A reasonable and informed public would view judges holding membership in these organizations to hold, advocate and serve liberal or conservative interests,” the panel said in its proposal.

The Federalist Society has been ascendant in Republican circles for its advocacy of strictly interpreting the Constitution according to what conservatives say was its original meaning. Its views were once considered “on the fringe,” Donald F. McGahn II, a former White House counsel for Mr. Trump, said in an address at the group’s convention in November that also featured prominent attendees like Supreme Court Justice Brett M. Kavanaugh.

An analysis in March by The New York Times showed that all but eight of Mr. Trump’s 51 appointees to the appellate bench had ties to the organization, nearly twice as many as under President George W. Bush. (All but six of Mr. Trump’s appellate appointees signed the letter.)

The group has been instrumental in promoting Mr. Trump’s judicial picks, many of whom spent their careers openly engaged in causes that have been important to Republicans, such as opposition to gay marriage and to government funding for abortion, The Times found.

Judge Walker, a protégé of Senator Mitch McConnell, Republican of Kentucky and the majority leader, was confirmed to the Western District of Kentucky last October and was nominated last month by Mr. Trump to the U.S. Court of Appeals for the District of Columbia Circuit, where four of the current nine Supreme Court justices served.

At 38, he would be one of the youngest judges on the appellate bench.

Judge Walker has belonged to the Federalist Society since 2006, when he was studying at Harvard Law School, according to his résumé.

The letter expressed “deep concern” with the proposed ban, which Judge Walker and the others said “misunderstands” the Federalist Society. The proposal, they wrote, also “applies a double standard” by not banning affiliations with the American Bar Association, which conservatives have long called biased against Republican judicial nominees.

Three of Mr. Trump’s appellate nominees who were deemed unqualified by the American Bar Association were confirmed nonetheless. The group also rated Judge Walker unqualified when he was nominated to the district court because of his lack of trial experience.

The ethics panel, a group of 15 judges led by an appellate judge in North Dakota appointed by Mr. Trump, acknowledged concerns about the American Bar Association but distinguished it from the Federalist Society and the American Constitution Society because it was “concerned with the improvement of the law in general and advocacy for the legal profession as a whole.”

The objecting judges, in their letter, pointed to positions the American Bar Association had taken in high-profile cases like those involving a baker who refused to create a wedding cake for a gay couple and Mr. Trump’s travel ban. On both occasions, the bar group took sides by filing a so-called amicus brief.

“Over the last decade, the A.B.A. has filed more than 100 amicus briefs in many of our nation’s most charged cases,” the judges wrote. “The Federalist Society has not filed even one.”

The judges also took aim at the ethics panel itself, suggesting its proposal had raised “serious questions about the committee’s internal procedures and transparency.”

The panel, formally known as the Committee on Codes of Conduct of the Judicial Conference of the United States, circulated its proposal among all federal judges in January and solicited their feedback by this month. In addition to the letter signed by the judges, the panel received a separate letter voicing similar objections signed by nearly 30 Republican senators, including Mr. McConnell. The lawmakers called the American Bar Association’s treatment of some of Mr. Trump’s appointees “disingenuous, unfair and shameful.”

The Federalist Society and the American Bar Association did not respond to requests for comment. The American Constitution Society declined to comment.

Judge Walker addressed his support for the Federalist Society in an interview in March for a legal podcast.

“You start with the premise, the principle, the almost First Commandment, that politics have absolutely no role in the courtroom,” he told the podcast, “Ipse Dixit.” “And any halfway decent judge is vigilant to check any political preferences at the door before he or she puts on a robe and decides a case.”

But, he added, “That does not mean that judges shouldn’t be involved in the community in a nonpolitical, nonpartisan way.”

Many against the proposed ban have pointed to the roster of speakers at Federalist Society conferences, which have included people from various points on the ideological spectrum. The ban would not block participation in such events, only membership.

In the podcast, Judge Walker said that allowance did not go far enough. “I feel very strongly that they should be allowed to join those organizations and participate in events,” he said. “I think the bench is healthier when that happens.”

The judges who signed the letter were overwhelmingly appointed by Republican presidents, but a handful were named by Presidents Barack Obama, Bill Clinton and Jimmy Carter. The letter also objected to the proposed ban on American Constitution Society membership, and its signers described themselves as a mixed group, including judges who belonged to the Federalist Society and spoke at its events, and others who did not.

“We are all better served when judges expose themselves to a wide array of legal ideas,” the letter said. “And we would like to think that those organizations benefit from having judges participate in them.”

Senator Sheldon Whitehouse, Democrat of Rhode Island and a member of the Judiciary Committee, said he supported the proposed ban, suggesting the Federalist Society’s approach to the law was aligned with the interests of big corporations and had undue sway over nominations.

“The Federalist Society has become so significant in the judicial selection process,” Mr. Whitehouse said in an interview. “That is a particularly noxious role for an organization that has judges as its members.”

Mike Davis, who leads the Article III Project, a judicial advocacy group that has pushed for Mr. Trump’s appointments, predicted that the ethics panel would back down from the ban.

“I think that there are some liberal judges that are going after the Federalist Society because of how helpful and good they’ve been in helping Trump with judges,” said Mr. Davis, who previously served as a Republican Senate aide and also worked as a law clerk to Justice Neil M. Gorsuch when he was on the federal appeals court in Colorado.

The head of the administrative office of the federal courts gave judges until May 20 to comment on the proposed ban. Judge Walker’s nomination is expected to be taken up by the Senate as early as Wednesday.