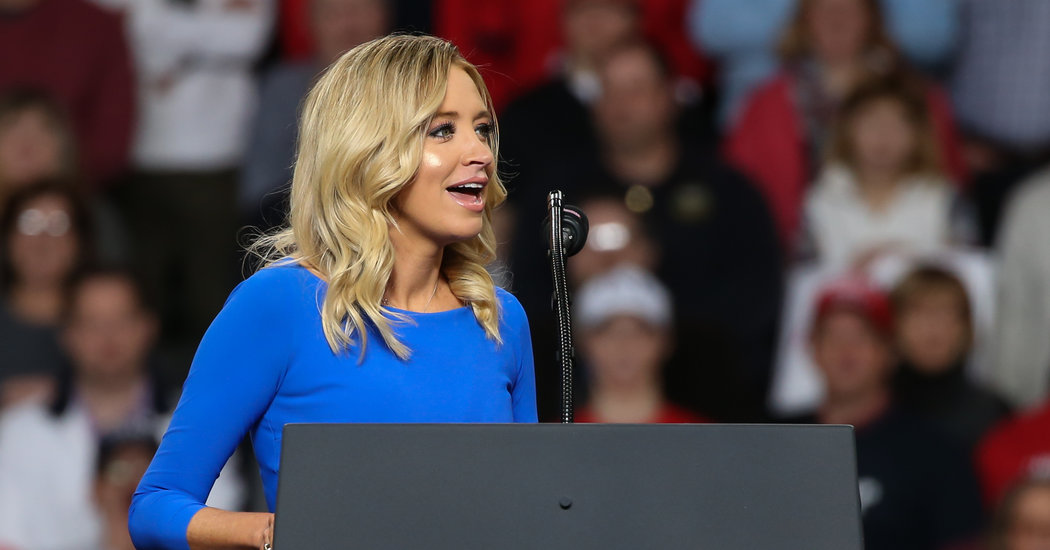 Stephanie Grisham, the White House press secretary, is rejoining the staff of Melania Trump, the first lady, and Kayleigh McEnany, a campaign spokeswoman will replace her — the latest shake-up in a communications office that has seen almost constant turnover under President Trump.

Ms. McEnany has been a vocal defender of Mr. Trump on television, the main role the president has long believed the press secretary should play, according to current and former advisers.

Her hiring is the first major personnel move by the incoming White House chief of staff, former Representative Mark Meadows of North Carolina. It was first reported by CNN.

Ms. Grisham, who never held a press briefing in her nine-month tenure as the president’s spokeswoman, will become Mrs. Trump’s chief of staff, replacing Lindsay Reynolds, who resigned, according a statement from the first lady’s office.

Also joining the White House press staff will be Alyssa Farah, a top spokeswoman at the Defense Department who once worked for Vice President Mike Pence, according to people briefed on the moves. Ms. Farah is close with Mr. Meadows, whose longtime congressional aide, Ben Williamson, will also join the communications team as an adviser.

It is unclear whether Ms. McEnany will revive the traditional role of a White House press secretary — answering questions from reporters in a daily briefing. Mr. Meadows wants her to focus on defending the president on television, according to people familiar with the move.

Ms. McEnany, 31 and a graduate of Harvard Law School, was a frequent surrogate for the president, promoting Mr. Trump’s policies on network television before she formally joined Mr. Trump’s re-election campaign.

Mr. Meadows has clashed with Ms. Grisham, a Trump loyalist who was one of the few remaining advisers who worked on the president’s 2016 campaign, targeting her as someone he wanted to replace, according to administration officials.

The communications shop has long been a focus of complaints within the White House, dating back to the first months of Mr. Trump’s term.

Mr. Trump, who sees himself as his own best spokesman, has frequently complained about his media coverage. Ms. Grisham was rarely on television, but she was known for aggressive exchanges defending her boss on Twitter.

She also was among the few administration officials who fought for reporters to have access to high-profile events on the president’s trips to authoritarian countries, getting into a physical fight with officials in North Korea when they tried to block access to the American media while Mr. Trump was on a trip to Asia.

In a release describing Ms. Grisham’s new role, Mrs. Trump said that Ms. Grisham “has been a mainstay and true leader in the administration from even before day one, and I know she will excel” as the chief of staff.