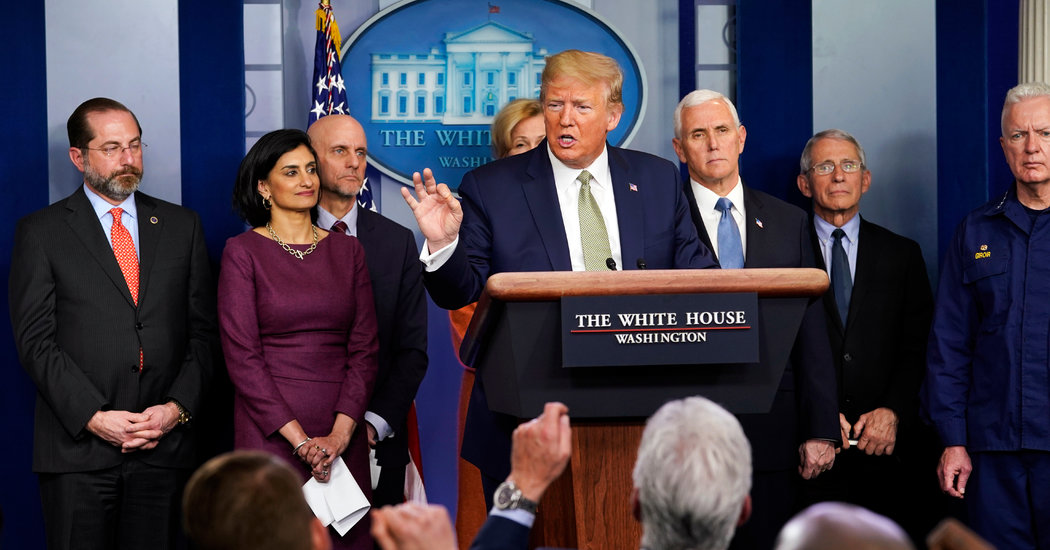 WASHINGTON — President Trump called on Congress on Tuesday to quickly approve a sweeping economic stimulus package that would include sending checks directly to Americans within two weeks, as large sections of the economy shut down in the face of the coronavirus pandemic.

“We want to go big,” Mr. Trump said at a news conference at the White House, adding that he had instructed Steven Mnuchin, the Treasury secretary, to introduce measures that would provide more immediate economic support over the payroll tax cut holiday that he had been promoting.

The Trump administration is preparing to ask Congress to infuse about $850 billion in additional stimulus to prop up the economy. While Mr. Trump had signaled that he wanted the payroll tax to be the centerpiece, it faces bipartisan opposition in Congress, and on Tuesday, Mr. Mnuchin said time was of the essence.

“We’re looking at sending checks to Americans immediately,” Mr. Mnuchin said. “I mean now, in the next two weeks.”

The size of the payments has not been determined, Mr. Mnuchin said, and they would not be for people who make over a million dollars. But later, at a lunch in the Capitol, the Treasury secretary privately told Republican senators that he envisioned the direct payments covering two weeks of pay and said they could total $250 billion, according to two people familiar with the discussion who described it on the condition of anonymity.

The goal would be to get them out by the end of April, he said, with additional checks possible if the national emergency persists, the people said.

Earlier, Mr. Mnuchin said the package, whose overall cost could exceed $850 billion, would also include payments to small businesses and loan guarantees to industries like airlines and hotels. The goal is to get something sweeping passed as quickly as possible.

“The president has instructed me we have to do this now,” Mr. Mnuchin said at the White House, before huddling with senators.

The administration has been negotiating with lawmakers in the House and Senate over the timeline and contents of a stimulus package. Republicans are reluctant to embrace a narrower relief package the House passed last week that includes paid leave, unemployment insurance, free coronavirus testing and additional food and health care aid, which Mr. Mnuchin and Speaker Nancy Pelosi have characterized as a first step to provide relief ahead of a broader stimulus plan to stabilize the economy.

The White House’s abrupt shift to embrace direct payments to individuals was a clear reaction to sentiment in the Senate, where Republicans and Democrats alike have raced to propose direct payments — and shown little enthusiasm for the payroll tax holiday that was previously the centerpiece of Mr. Trump’s stimulus proposal.

Senator John Thune of South Dakota, the second-ranking Senate Republican, said his conference was largely supportive of the move.

“We have a high level of interest in that idea,” he said. “You are not going to find unanimous consensus on any of these ideas, but I would say that that idea has a lot more resonance with our members than, say a payroll tax cut.”

But some Republican senators now want to wrap both the House-passed relief package and broader emergency economic measures into one large bill, which would give them more negotiating leverage on a final product, according to people involved in the discussions who insisted on anonymity to describe them.

Others argued there was no time to wait for a larger deal. Senator Todd Young, Republican of Indiana and a member of Senate leadership, challenged colleagues opposed to the bite-by-bite approach to go back home and explain to constituents why “doing nothing puts America in a better position” than at least moving the House’s bill into law.

“Don’t let the perfect be the enemy of the good, if you indeed regard this as good,” he said.

At the White House on Tuesday, Mr. Mnuchin said Mr. Trump instructed him to allow for the deferment of income tax payments, interest free and penalty free, for 90 days. People can defer up to $1 million and corporations can defer up to $10 million in payments.

The Treasury secretary said that would inject $300 billion into the economy. He added that people who can file their taxes now should do so because many would get refunds.

The Trump administration is also supporting a request for $50 billion in economic relief for the airline industry as part of the broader package. The industry’s lobbying group publicly made the request on Monday, asking for grants, loan guarantees and tax relief. The administration is also considering ways to support the cruise ship industry.

Mr. Trump said on Tuesday that additional help could be in store for Boeing, the aviation company that was already facing serious problems after the grounding of its 737 Max airplanes amid technical problems that led to two crashes.

Widespread travel restrictions are throttling both industries and are expected to be a major drag on global economic growth. Economists at Capital Economics predicted that tourism worldwide could drop 50 percent over the next six weeks, sapping seven-tenths of a percentage point from the world’s annual gross domestic product.

The White House proposal emerged amid a growing sense of urgency among lawmakers to step in with aggressive measures to stanch the economic pain and mounting anxiety that Congress was running out of time to do so.

With public health officials counseling significant measures to slow the spread of the coronavirus, and states and cities ordering closures of businesses, limitations on travel and other restrictions on movement, it is not clear how long lawmakers can continue gathering in Washington.

Senator Mitch McConnell, Republican of Kentucky and the majority leader, said on Tuesday that senators would not leave the capital before passing “significant and bold new steps, above and beyond what the House has passed, to help our strong nation and our strong underlying economy weather this storm.”

Mr. Trump’s proposed payroll tax cut had drawn opposition from members of both parties, and a growing chorus of Republicans and Democrats were calling instead for cash payments to Americans. Senator Mitt Romney, Republican of Utah, said this week that every adult American should receive a $1,000 check from the government.

A group of Democratic senators, led by Michael Bennet of Colorado, Cory Booker of New Jersey and Sherrod Brown of Ohio, is pushing Congress to send as much as $4,500 to nearly every adult and child in the United States this year, as part of a sustained government income-support program to counter the economic slowdown.

Mr. Trump acknowledged that a payroll tax cut holiday could take time to trickle through the economy and that more immediate relief was necessary. However, he suggested that a more modest payroll tax cut could still be part of a final stimulus package.

Economists on both sides of the aisle have pressured lawmakers to adopt direct payments over payroll tax cuts because they would bolster the economy more quickly and better help workers who lose their jobs or have their hours cut back as economic activity contracts from social-distancing measures meant to slow the spread of the virus.

“Economic events, public health events, have lit a fire under policymakers,” Ms. Sahm said. “This is the policy we need to have. We should have had it three weeks ago, but it’s good to see it moving.”

The Senate has yet to act on the measure the House passed last week, which was the product of negotiations between Democrats and Mr. Mnuchin. The House substantially scaled back the scope of the paid leave provisions on Monday as part of an agreed-upon package that passed quietly without a vote.

Workers affected by the pandemic — because they are ill, quarantined, caring for a family member or lack child care with schools closed — would still receive two weeks of sick leave. But health care providers or emergency responders could be excluded by the labor secretary. And any additional leave provided would be limited to workers with children whose schools or child care have been closed.

The original legislation offered 10 additional weeks of paid leave at two-thirds pay for all workers affected by the pandemic.

Larry Kudlow, the director of the National Economic Council, laid out the administration’s fiscal stimulus approach on Monday and said it would amount to about $800 billion, a figure that did not include relief for the airline industry.

Mr. Kudlow and Mr. Mnuchin are also considering an array of other proposals to help individuals and small and midsize businesses, which are facing cash flow problems. One of those ideas, according to people familiar with the discussions, would make it easier for businesses to restructure debt. Other ideas under consideration include providing more funding to hospitals and measures such as loan workouts to help homeowners avoid foreclosure.

The Treasury secretary played down speculation that American markets could be closed because of the tremendous volatility, but said it was possible that hours could be shortened.

“We absolutely believe in keeping the markets open,” he said. “Americans need to know they have access to their money.”