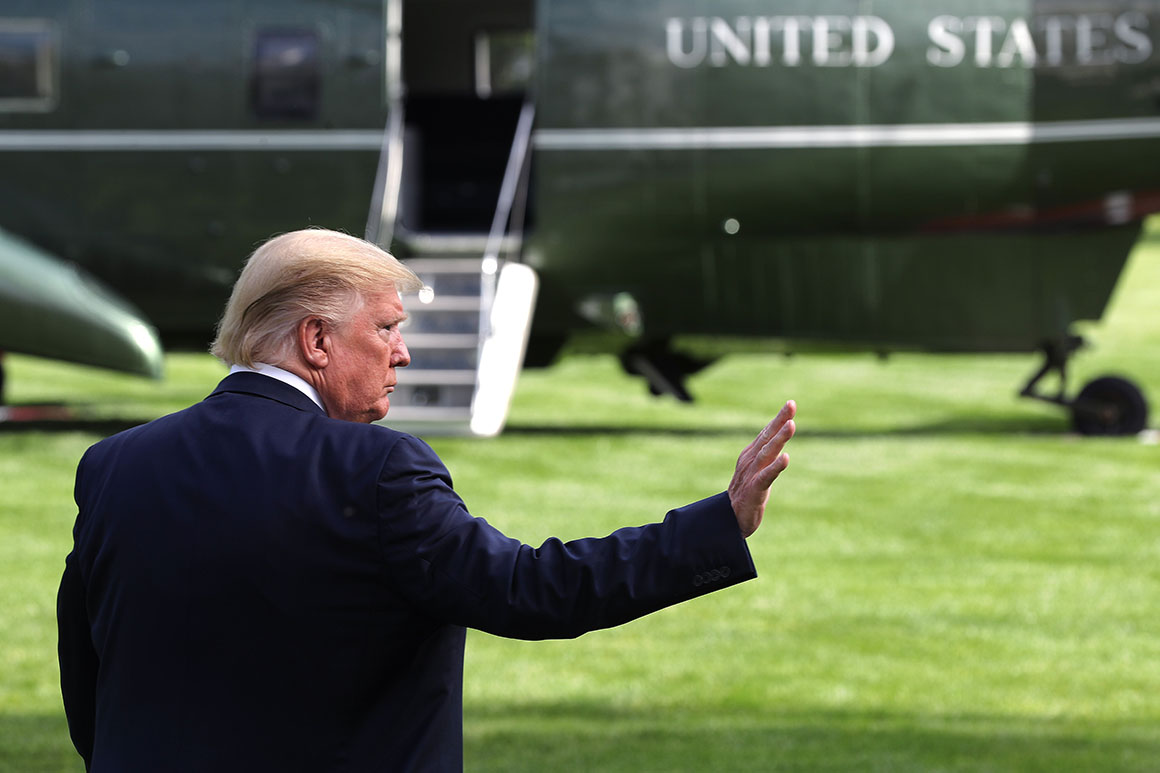 “States that wait until June to reopen are wiping out all of the economic gains they would have made in 2020,” said Stephen Moore, an informal economic adviser to the Trump administration dating back to the 2016 campaign. “If I were the president, I would be talking a lot more about that — that these states are doing severe damage to societies and citizens if they keep businesses without revenue and people without paychecks for another month.”

At the White House, health officials like Dr. Deborah Birx and Dr. Anthony Fauci are no longer expected to make regular briefing appearances. At Camp David, Trump had no public events scheduled for Saturday, but insisted the trip was a “working weekend.” An aide did not respond to an inquiry about whether the president would golf during his stay, as he has often done during past weekend getaways.

“We’re going to be spending a lot of time with meetings and phone calls and some foreign leaders,” Trump said on Friday. “So, we look forward to that, and we’ll be back very soon. I guess we’re doing something pretty big on Sunday night at the Lincoln Memorial.”

Two White House spokespeople did not respond to requests for comment about the president’s weekend.

The visit to Camp David comes at a pivotal moment for Trump, as he faces declining approval ratings seven months from the November election. Aides are eager for him to escape the confines of the White House and begin to travel again.

New rounds of polling show Trump’s support falling in key swing states and among demographics such as senior citizens. Eager to resurrect his political fortunes, Trump spent the week hyping an economic reopening and meeting with governors, business executives and people on the front lines of the coronavirus fight.

Trump and his top aides have been eager to portray their actions to mitigate the coronavirus as aggressive and efficient, fending off criticism from political critics, some governors and health experts who have called it slow-moving, ad hoc and dangerous — particularly as Trump peddled dubious health information from the White House.

The administration also found itself in two other controversies Friday night. First, it was revealed the White House had blocked Fauci from testifying before a Democratic-controlled House committee, although Fauci is still expected to appear before the Republican-controlled Senate sometime over the next two weeks, according to a senior administration official. Then, late Friday night, Trump also moved to replace the inspector general at the Department of Health and Human Services who, in a report, had identified problems with testing and supplies at hospitals.

“We’re on the other side of the medical aspect of this and I think that we’ve achieved all the different milestones that are needed,” said Jared Kushner, Trump’s son-in-law and senior adviser, in a Fox News interview on Wednesday, as the coronavirus death toll rose to nearly 60,000 Americans. “So the government federal government rose to the challenge, and this is a great success story and I think that that’s really what needs to be told.”

Trump’s meetings at Camp David come as roughly 15 states move to slowly restart their economies over the weekend. Governors have their own guidelines for reopening businesses and relaxing social-distancing guidelines, but Trump and several conservatives view even a fledgling reopening as crucial for the president.

Trump is slated to visit Phoenix, Ariz., on May 5 to tour a Honeywell aerospace plant that recently expanded its production to make respirator masks. Arizona is one of the states reopening this weekend.

Part of the calculus for the nudge to reopen the economy is political.

Trump’s political advisers believe he will be hard-pressed to win the November election if the economy does not show signs of improvement. They have been trying to cast Trump as a wartime president who oversaw a three-year economic boon and can jumpstart another economic resurgence once the pandemic comes under control.