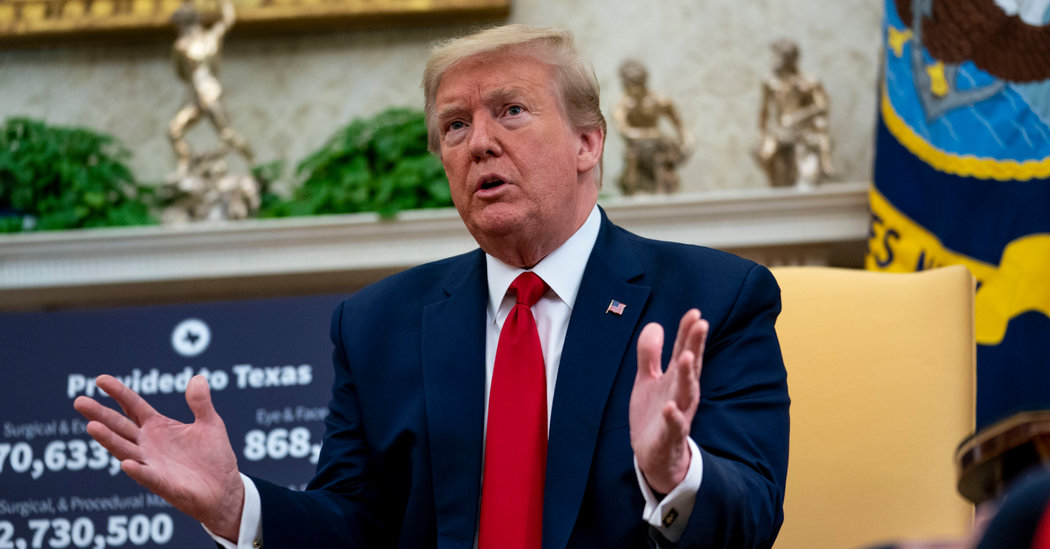 WASHINGTON — President Trump responded on Friday to the Justice Department’s decision to drop criminal charges against his former national security adviser Michael T. Flynn by delivering his most extensive and aggrieved remarks on the Russia investigation since the arrival of the coronavirus.

In an interview with Fox News, Mr. Trump praised Attorney General William P. Barr for the dramatic action announced Thursday that nullified a major case prosecuted by the special counsel Robert S. Mueller III as part of his investigation into Russian interference in the 2016 election.

“Bill Barr is a man of unbelievable credibility and courage, and he’s going to go down in the history of our country,” Mr. Trump said.

The president said the outcome reflected well on Mr. Barr, who has expressed skepticism about Mr. Mueller’s investigation. “He’s the opposite of Robert Mueller because you look at Mueller — that was purely corrupt,” Mr. Trump said.

Mr. Trump gathered a group of 19 conservative House Republicans at the White House, along with senior aides and economic officials, to discuss reopening the American economy. A sizable portion of the session featured the president and his guests denouncing the Russia investigation, or the F.B.I.’s “effort to create a coup,” as Representative Louie Gohmert of Texas put it.

Mr. Trump also laid a wreath at the World War II memorial on Friday in Washington to commemorate the allied victory over Germany in 1945. He was joined there by several veterans over 90, putting them at high risk of severe infection from the coronavirus, an event that troubled some of their family members.

But his focus was established in the Fox interview. Mr. Trump said his attorney general had acted wisely in assigning a U.S. attorney to look into the case against Mr. Flynn, who pleaded guilty to lying to the F.B.I. in 2017 about his contacts with the Russian ambassador to Washington during the 2016 presidential transition. Mr. Trump and his allies had long called Mr. Flynn’s prosecution unjust and said it should be dropped.

“So he came back and he said, ‘This is an innocent man,’” Mr. Trump said of the federal prosecutor, Jeff Jensen of the Eastern District of Missouri.

The president also laced into Mr. Barr’s predecessor, former Attorney General Jeff Sessions, whom Mr. Trump has never forgiven for recusing himself from the Russia investigation over his own 2016 contacts with the Russian ambassador, a move that led to Mr. Mueller’s appointment.

“Jeff Sessions was a disaster,” Mr. Trump said. “He was a very average guy.”

The president’s commentary was a kind of flashback to a pre-coronavirus reality — when the Russia investigation and Mr. Trump’s impeachment dominated the national political discourse. It came in a nearly hourlong appearance on one of his favorite Fox News programs, “Fox and Friends.” The pandemic did not come up until nearly 20 minutes into the interview.

Even then, the president compared the virus favorably with his persecutors in the Russia matter, calling the coronavirus “a much smarter enemy,” and adding, “Those are people — they are not in the same league.”

“This is a very brilliant enemy, and it happens to be invisible,” Mr. Trump said. “And I think that we’re doing really, really well.”

Despite the disastrous unemployment numbers announced Friday morning, the president vowed to restore the American economy quickly as the nation reopens with his strong encouragement, even as public health experts strongly caution against too much social and economic activity.

Mr. Trump lamented that the virus had interrupted a period of economic growth, saying that advisers had come to him and said: “Sir, you’ve got to turn it off. We have to close the country.”

But Mr. Trump also said he suspected that partisan politics were shaping the speed with which some governors were relaxing their lockdown orders.

Mr. Trump said, after prompting, that he would send a rapid-result Abbott Laboratories test kit from the White House’s inventory to the home of his opponent, the presumptive Democratic presidential nominee, former Vice President Joseph Biden Jr., if Mr. Biden asked him to. The president said that would allow Mr. Biden to “get out of the basement so he can speak,” adding that “every time he talks, it’s, like, a good thing.”

During his discussion of the Russia investigation on Fox, Mr. Trump also cited an unlikely historical guide in President Richard M. Nixon, who resigned in disgrace.

The president allowed that there was “one big difference” between himself and Nixon, before offering two: “No. 1, he may have been guilty. And No. 2, he had tapes all over the place. I wasn’t guilty, I did nothing wrong. And there are no tapes.”

Asked by a reporter at the White House why he had not worn a mask when in he was in proximity to the war veterans, Mr. Trump noted that he had stood a few feet away when briefly greeting them. He added that “the wind was blowing so hard and such a direction that if the plague ever reached them, I’d be very surprised.”

He also suggested their heroism could make them impervious to the virus. “They’re so pure, it will never happen, all right?” Mr. Trump said.