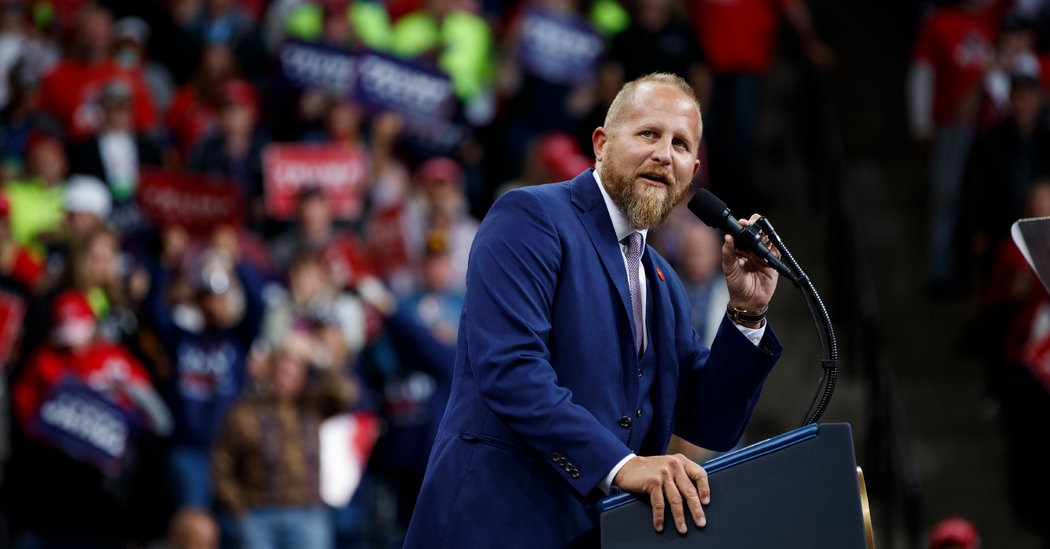 President Trump on Wednesday shook up his re-election team with less than four months until November’s vote, replacing his campaign manager, Brad Parscale, in an acknowledgment of the president’s diminished standing in nearly all public and private polling since the spring.

Mr. Parscale, who was named campaign manager unusually early, in February 2018, will step out of the job and Bill Stepien, currently the deputy campaign manager and a veteran political operative, will take over. Mr. Parscale will stay on with the campaign, becoming a senior adviser for data and digital operations.

The move comes as Mr. Trump’s advantages as an incumbent president have eroded in the face of a pandemic that has killed over 137,000 Americans and battered the nation’s economy — once Mr. Trump’s most powerful argument for re-election. The president has been heavily criticized for his handling of the coronavirus and the halting federal response to it, and Mr. Trump’s own public comments have deepened the hole in which he finds himself in national and battleground state polling.

Several new polls released Wednesday showed Mr. Trump trailing the presumptive Democratic nominee, Joseph R. Biden Jr., by double digits, and in one of them, 62 percent of respondents said they believed Mr. Trump was “hurting rather than helping” efforts to combat the pandemic.

“I am pleased to announce that Bill Stepien has been promoted to the role of Trump campaign manager,” Mr. Trump said in a statement. “Brad Parscale, who has been with me for a very long time and has led our tremendous digital and data strategies, will remain in that role, while being a senior adviser to the campaign. Both were heavily involved in our historic 2016 win, and I look forward to having a big and very important second win together.”

Mr. Trump is often described as his own campaign manager, and his political operation, which is overseen by Jared Kushner, his son-in-law and a senior White House adviser, has been tailored to his desires.

In recent weeks, as the Trump team has tried to regain its footing, Mr. Trump brought back Jason Miller, a communications and political strategist who was a key figure on his 2016 campaign. The president also elevated Mr. Stepien, who had been a top adviser, to deputy campaign manager in May, giving him a more expansive role in operations. Mr. Stepien maintains a low profile, which Mr. Trump prefers, and something Mr. Parscale did not do.

Mr. Miller and Mr. Stepien have been working closely with another 2016 veteran, Hope Hicks, a senior adviser to Mr. Trump in the White House who handles his schedule. Another veteran of 2016 whom Mr. Trump likes, Susie Wiles, a Florida-based Republican operative, was recently brought back to the campaign.

A person familiar with the planning said there might still be another addition to the team, such as a campaign chairman.

Mr. Kushner, in a brief interview, described both Mr. Parscale and Mr. Stepien — both of whom he hired — as key pieces of the 2016 campaign as well as the current one. Mr. Parscale was a digital adviser in 2016. Mr. Stepien, who had been a top political adviser to Gov. Chris Christie of New Jersey, joined as the Trump campaign’s national field director in August 2016.

Throughout the re-election effort, Mr. Kushner has served as the de facto campaign manager, according to several people involved in the effort. He was a factor in the

Mr. Parscale is closely connected to various aspects of the campaign that he built along with the Republican National Committee. Among the campaign components that Mr. Parscale set up was the digital fund-raising apparatus, which gave the president a cushion over the last few months, when in-person, high-dollar events were impossible to hold because of the virus.

But for over a year, Mr. Parscale has been the focus of intense scrutiny and news coverage about his operation and whether he was making an outsize amount of money from the campaign. Those articles have focused attention on his purchases of property and cars in Florida, where he lives, and became a source of irritation for the president, who saw them as a distraction.

Mr. Parscale was also visible in ways that campaign managers typically aren’t, appearing in a campaign ad and having his name listed on fund-raising events.

The president at times berated Mr. Parscale over real and perceived transgressions, sometimes screaming at him and once threatening to sue him.

Mr. Parscale, who was handpicked by Mr. Kushner and who is close to the Trump family, lasted longer in the job than most of the people who led various iterations of Mr. Trump’s 2016 campaign. And campaign aides emphasized that Mr. Parscale was being asked to stay on, unlike others who have been let go from the Trump orbit.

But Mr. Parscale has no background in politics, and he suffered something of a mortal wound in the role three weeks ago when a much-hyped rally in Tulsa, Okla., to “reboot” Mr. Trump’s campaign was sparsely attended. After boasting of nearly one million ticket requests, just over 6,000 people attended the June 20 event, an embarrassment that Mr. Trump could not let go of.

The campaign changes had been settled on over the last two days and were set to be announced on Thursday morning at a 10 a.m. staff meeting, but word of the moves began reaching reporters on Wednesday evening. Mr. Parscale was said to have been caught by surprise, and learned of them only a short time before they became public.

Other senior staff members were also caught by surprise.