WASHINGTON — President Trump criticized China for failing to hold up its end of the trade deal on Friday and said he was “very torn” about the fate of the agreement signed in January, even as his closest economic advisers released a statement reassuring the world that the truce was intact.

“Look, I’m having a very hard time with China,” Mr. Trump said in an interview on Fox & Friends, lamenting how recent economic disruptions tied to the coronavirus had overridden “a great trade deal.”

When asked whether the deal might be falling apart, Mr. Trump was noncommittal.

“I have not decided yet, if you want to know the truth,” he said.

Mr. Trump’s comments came just hours after top trade and financial officials held talks via conference call, their first since the coronavirus pandemic ballooned in late January. In separate statements, the two countries signaled that their agreement was on track.

“Both sides agreed that good progress is being made on creating the governmental infrastructures necessary to make the agreement a success,” the Office of the United States Trade Representative said. “They also agreed that in spite of the current global health emergency, both countries fully expect to meet their obligations under the agreement in a timely manner.”

The future of the trade deal, which brought an end to tariff escalations and set the two countries toward a more cordial relationship, has been called into question in recent days by Mr. Trump, who has expressed anger over China’s response to the coronavirus and has suggested the United States could retaliate for its failure to contain the disease.

Those comments had rattled stock markets, and the joint statement released on Friday morning seemed aimed at reassuring businesses and investors that the world’s largest economies were not on the cusp of restarting the trade war.

Yet deep uncertainty surrounding the U.S.-China relationship remains. As the nations spar over the pandemic, misinformation campaigns, Beijing’s policies toward Hong Kong, Taiwan and the South China Sea and over trade, relations have reached a level of hostility not seen even in the depths of the trade war last year.

They could fray even more in the coming months. Mr. Trump and many of his advisers continue to see the trade agreement signed with China last year as a signature achievement. But they have been worried and angered by recent data showing that China is falling behind on its promises to buy $200 billion of additional American exports by 2021.

Chinese negotiators face nationalists at home who favor a more antagonistic relationship. And Mr. Trump’s campaign team and Republican lawmakers see taking a hard stance on China as a way to bolster their prospects ahead of the November elections.

Two-thirds of Americans now view China unfavorably, according to a poll from the Pew Research Center, a proportion that has climbed sharply in the last few years. Mr. Trump and former Vice President Joe Biden have painted each other as weak on China in recent campaign ads. 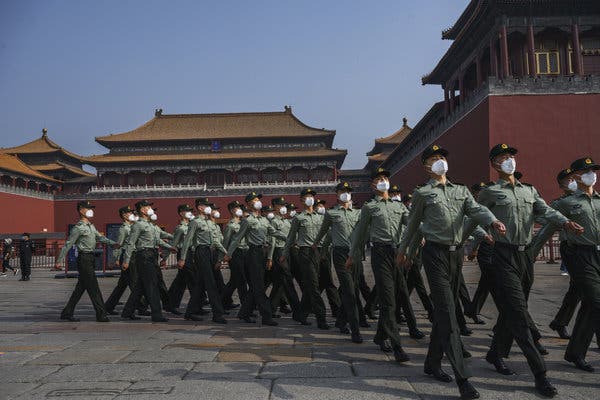 Chinese police officers marched by the entrance of the Forbidden City in Beijing this week.Credit…Kevin Frayer/Getty Images

As he has throughout his presidency, Mr. Trump has continued to alternate between praise and criticism of China. But his optimism about his trade deal appears to have slowly evaporated in recent weeks.

In early April, Mr. Trump said he believed the Chinese leader, Xi Jinping, would “honor the deal” he made with the United States “because I know President Xi, who I like and respect,” Mr. Trump said.

The Phase 1 agreement keeps 25 percent tariffs in place on a wide range of imports from China that the Trump administration considers to have strategic or economic value, like cars or nuclear reactor components. It requires China to strengthen intellectual property protection and open its markets to foreign financial services companies.

The agreement also calls for China to increase its imports from the United States by $200 billion this year and next year, compared with levels in 2017, before the trade war began.

The chapter on extra purchases, one of seven chapters in the agreement, mandates specific increases in four categories of China’s imports from the United States: food, manufactured goods, energy and services.

China has increased its imports of American food since the pact was signed. But its overall imports of other American goods have fallen short of the administration’s initial hopes.

China’s total imports from the United States fell 5.6 percent in the first four months of this year compared with the same period last year, according to China’s trade data. According to an analysis by Panjiva, China’s imports in March of the goods it promised to buy in the trade deal were just 44 percent of their target level, and Chinese trade data suggested April might be worse.

Given the economic catastrophe caused by coronavirus, that is no surprise, analysts said.

China is still struggling to recover from its efforts to stamp out the coronavirus, which included shutting vast parts of its industrial machine; its economy shrank for the first time in nearly half a century. The United States is still debating when to end its own lockdowns, which have contributed to the loss of millions of jobs.

“There’s no chance whatsoever that the purchasing targets will be met,” said Scott Kennedy, a China expert at the Center for Strategic and International Studies.

Corn harvesting in Roachdale, Ind., last year. China has been importing more American food but isn’t likely to meet the targets in the trade pact.Credit…Bryan Woolston/Reuters

Economists said plummeting consumer demand in China would likely translate to fewer purchases of American cars and Boeing aircraft, making it hard for China to meet the target for buying manufactured goods.

Shutdowns in American slaughterhouses could limit the amount of pork, beef and other American agricultural products available for purchase. And the price of oil and gas has collapsed, meaning China would have to buy many more barrels to meet a $50 billion target by the end of the next year.

Brad Setser, an economist at the Council on Foreign Relations, said the energy target from the trade deal “assumes a different world.”

Experts in China said Beijing would live up to its commitments, despite a pandemic that negotiators could not have anticipated when the truce was reached in mid-January.

But Mr. He acknowledged that a nose-dive in world oil prices, together with falling Chinese energy usage as the country’s economy slows, would make it hard for China to meet the targets in the Phase 1 accord for energy imports from the United States.

“There is a phenomenal decrease in the demand,” Mr. He said.

On Wednesday, Mr. Trump said during a White House briefing that by the end of next week he would review whether China was complying with the Phase 1 trade pact. But when asked about putting tariffs on China, he responded, “I don’t want to talk about this.”

Current and former trade officials on both sides of the Pacific have evinced little enthusiasm for a revival of the trade war and predicted that the agreement would survive.

“The Phase 1 agreement will set the rules of engagement even after the pandemic has receded,” said Jamieson Greer, who was chief of staff for Robert Lighthizer, the United States trade representative, until a month ago and is now a partner at King and Spalding, a Washington law firm.

The pact signed in January contains a clause saying the two countries may resume talks if “a natural disaster or other unforeseeable event” prevents them from keeping the terms of the deal. But China has insisted it isn’t exercising that provision.

Against that backdrop, the statements released by both governments after the call — which included Mr. Lighthizer, Vice Premier Liu He and Treasury Secretary Steven T. Mnuchin — were noticeably upbeat.

“The two sides stated that they should strengthen macroeconomic and public health cooperation, strive to create a favorable atmosphere and conditions for the implementation of the first phase of the Sino-U.S. economic and trade agreement, and promote positive results,” China’s Ministry of Commerce said.

The ports of Los Angeles and Long Beach in April.Credit…Mario Tama/Getty Images