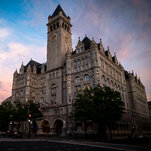 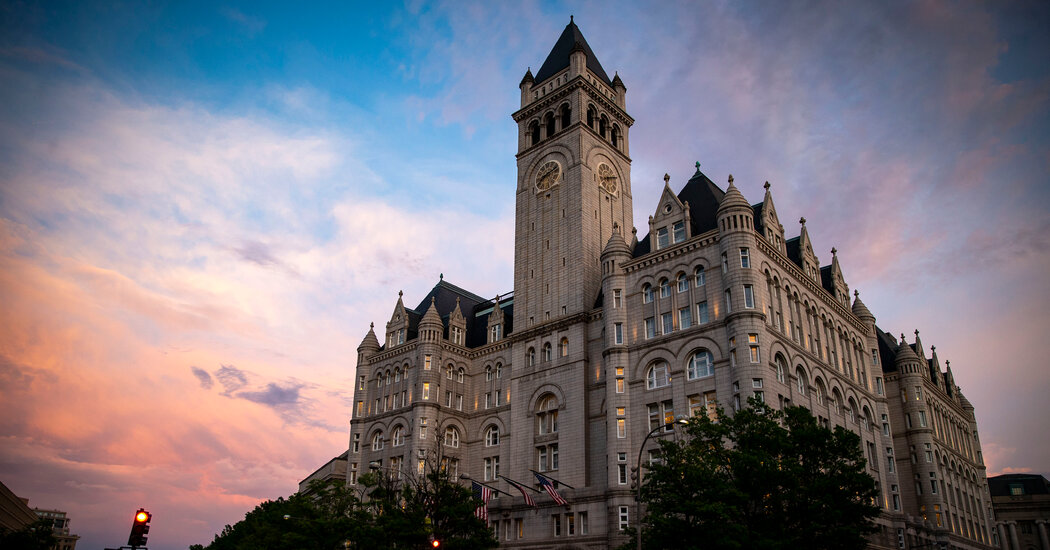 The lawsuit brought by the attorney general in Washington, D.C., claimed that the Trump hotel accepted excessive payments from the inaugural committee.

WASHINGTON — The Trump family business and President Donald J. Trump’s 2017 inauguration committee have jointly agreed to pay $750,000 to settle a lawsuit filed by the attorney general for the District of Columbia, who claimed that the Trump International Hotel in Washington illegally received excessive payments from the inauguration committee.

The settlement in the civil suit came with no admission of wrongdoing by the Trump Organization, the former president or the inaugural committee.

But the payment amounted to nearly three-quarters of the $1.03 million that the lawsuit, filed by Attorney General Karl Racine of Washington, said had been paid to Mr. Trump’s hotel by the nonprofit inaugural committee to rent out space at what Mr. Racine asserted was an above-market rate and then use it in part to host a private reception for Mr. Trump’s children on the evening he was sworn in as president.

The settlement also came just days before the Trump family was slated to formally close on the sale of the Trump International Hotel, which will be converted to a Waldorf Astoria after Mr. Trump’s name is stripped from the landmark building on Pennsylvania Avenue, a few blocks from the White House.

Negotiations to settle the suit intensified earlier this year after a Superior Court judge in Washington set a trial date for September and rejected an effort by the Trump Organization to be removed from the lawsuit, making it likely that members of Mr. Trump’s family were going to be called in open court to testify.

“After he was elected, one of the first actions Donald Trump took was illegally using his own inauguration to enrich his family,” Mr. Racine said in a statement announcing the settlement on Tuesday. “Nonprofit funds cannot be used to line the pockets of individuals, no matter how powerful they are.”

“Given the impending sale of The Trump International Hotel, Washington D.C., and with absolutely no admission of liability or guilt, we have reached a settlement to end all litigation with Democrat Attorney General Racine,” Mr. Trump’s statement said. “This was yet another example of weaponizing Law Enforcement against the Republican Party and, in particular, the former President of the United States. So bad for our Country!”

“Settlement was prudent simply to avoid the significant costs of litigating these baseless allegations through trial,” he said in the statement, adding that the inaugural committee’s payment was being covered by its insurance company.

The $750,000 from the inauguration case will be donated by Mr. Racine to two nonprofit groups that promote democracy and support youth in Washington, D.C., Mikva Challenge DC and DC Action, organizations that were founded by or run by former aides to President Bill Clinton, including Abner Mikva, a former federal judge, White House counsel to Mr. Clinton and Democratic member of Congress from Illinois.

Ivanka Trump and Donald Trump Jr., among many others, had to sit for depositions as Mr. Racine moved ahead in the case filed against the Trump Organization and the inauguration committee.

The settlement follows an action last year by the United States Supreme Court, after Mr. Trump left office, to dismiss separate legal claims that he had illegally accepted payments at the hotel from foreign government officials, in violation of the so-called emoluments clauses of the Constitution.

Those lawsuits were deemed to be moot because Mr. Trump no longer served as president, meaning the federal courts never concluded if Mr. Trump had violated the constitutional ban on gifts or payments from foreign governments.

In 2019, Mr. Trump agreed to a legal settlement in New York that he had misused charitable donations to benefit himself.

But the legal peril for Mr. Trump continues, with investigations ongoing in New York, where the state attorney general and two district attorneys have been examining statements that the Trump Organization made about the value of its properties, as well as other business practices; and in Georgia, where Mr. Trump and others are being investigated to determine if they criminally interfered with the 2020 presidential election.

Mr. Racine filed his lawsuit after an initial investigation by his office produced emails that showed that former aides to Mr. Trump’s inauguration questioned, even at the time the contract with the Trump hotel was being negotiated in December 2016, if the inauguration committee was overpaying the Trump family for the hotel rental.

“I am a bit worried about the optics of PIC paying Trump Hotel a high fee and the media making a big story out of it,” Rick Gates, the former deputy chair of Mr. Trump’s 2016 campaign and a member of Trump’s inauguration planning committee, wrote in a December 2016 email to Ivanka Trump, referring to the Presidential Inauguration Committee, as they negotiated a deal to rent out ballrooms and other space at the Trump hotel.

Numerous inquiries. Since Donald J. Trump left office, the former president has been facing civil and criminal investigations across the country into his business dealings and political activities. Here is a look at the notable inquiries:

Manhattan criminal case. The Manhattan district attorney’s office has been investigating whether Mr. Trump or his family business, the Trump Organization, intentionally submitted false property values to potential lenders. But new signs have emerged that the inquiry may be losing steam.

New York State civil inquiry. The New York attorney general’s office has been assisting with the Manhattan district attorney’s investigation while conducting its own civil inquiry into some of the same conduct. The civil inquiry is focused on whether Mr. Trump’s statements about the value of his assets were part of a pattern of fraud or were simply Trumpian showmanship.

Georgia criminal inquiry. Mr. Trump himself is under scrutiny in Georgia, where the district attorney of Fulton County has been investigating whether he and others criminally interfered with the 2020 election results in the state. A special investigative grand jury has been seated in the case.

Jan. 6 inquiries. A House select committee and federal prosecutors are investigating the Jan. 6 assault on the Capitol and examining the possible culpability of a broad range of figures — including Mr. Trump and his allies — involved in efforts to overturn the results of the 2020 election.

Westchester County criminal investigation. The district attorney’s office in Westchester County, N.Y., appears to be focused at least in part on whether the Trump Organization misled local officials about the value of a golf course, Trump National Golf Club Westchester, to reduce its taxes.

Washington, D.C., lawsuit. The attorney general for the District of Columbia sued Mr. Trump’s inaugural committee, saying it vastly overpaid the Trump Organization for space at the Trump International Hotel during the January 2017 inaugural celebration. The committee and Mr. Trump’s family business later agreed to pay $750,000 to settle the lawsuit.

The price that the Trump hotel proposed to charge the inauguration committee was reduced after these initial concerns were raised, but the fee remained much higher than what the same hotel had charged another nonprofit group during the inauguration, and still created concern among aides to Mr. Trump, emails collected during the lawsuit show.

The rental of the Trump hotel also included a special “friends and family” party sponsored by the adult children of Mr. Trump, Mr. Racine said in the lawsuit, a sign of how money donated to a nonprofit was being used for personal benefit.

The inaugural committee set up by Mr. Trump, which collected donations from corporations and individuals who later would often seek official action by the Trump administration to help their business interests, raised more than $107 million, far more than any previous inauguration.

The more than $1 million paid by the inauguration committee to the Trump hotel was seen by ethics watchdog groups as just the start of a pattern that lasted through the administration, with Mr. Trump and his family using his White House status to enrich themselves.

Under District of Columbia law, the attorney general oversees nonprofits, a power that the office has used in recent years to investigate a local nonprofit hospital and a theater company, among others accused of misuse of charitable funds.

Mr. Racine filed a motion on Tuesday asking Judge Yvonne Williams, of the Superior Court of the District of Columbia, to dismiss his 2020 lawsuit, after lawyers for the Trump Organization and the inauguration committee signed a deal detailing the terms of the proposed settlement.

The agreement noted that none of the current officers at the inauguration committee are involved in other nonprofits in the District of Columbia, eliminating any need to impose restrictions on their involvement in other charities in the city, as the New York attorney general had done as part of the settlement there in 2019.

In the New York case, Mr. Trump was ordered to pay more than $2 million in damages for what Attorney General Letitia James described as “misusing charitable funds for his own political gain,” including money from the Trump Foundation to pay for a portrait of Mr. Trump that cost $10,000 and using foundation money for a political campaign event.

Robert Weissman, the president of Public Citizen, a nonprofit group that tracked spending at Trump company operations, said the settlement was an important concession, even though the Trump Organization did not admit wrongdoing.

“Trump displayed from the first day of his presidency that the whole enterprise was a grift,” he said. “And much of that was in plain sight of the public.”