An Ohio Democratic State Representative has called for Donald Trump to be tried for “crimes against humanity,” after Sunday’s press conference in which the president once again promoted the unproven use of an anti-malarial drug against the novel coronavirus.

Throughout the White House briefings, Trump has repeatedly pushed hydroxychloroquine as a potential treatment to COVID-19, despite limited evidence of the drug’s effectiveness.

On Sunday, the president doubled down on his assertions, telling reporters that the drug was “being tested now” and claiming “there are some very strong, powerful signs” of its potential as a treatment for coronavirus.

“It’s a great malaria drug. It’s worked unbelievably. It’s a powerful drug on malaria,” Trump said of hydroxychloroquine. “And there are signs that it works on this, very strong signs. And in the meantime, it’s been around a long time. It also works very powerfully on lupus. So, there are some very strong, powerful signs and we’ll have to see.”

Noting that his administration has stockpiled 29 million pills of hydroxychloroquine, the president said the government was “sending them to various labs, our military, we’re sending them to hospitals.”

The president then suggested, “if you don’t have a heart problem, let your doctor think about it.”

“I juts think it is something, you know the expression, I’ve used it for certain reasons…What do you have to lose?”

When a journalist later attempted to ask Dr. Anthony Fauci, Director of the National Institute of Allergy and Infectious Diseases, for his take on the drug’s potential, Trump appeared to block the doctor from answering.

“You know how many times he’s answered that question? Maybe 15 times. You don’t have to ask that question,” Trump said. 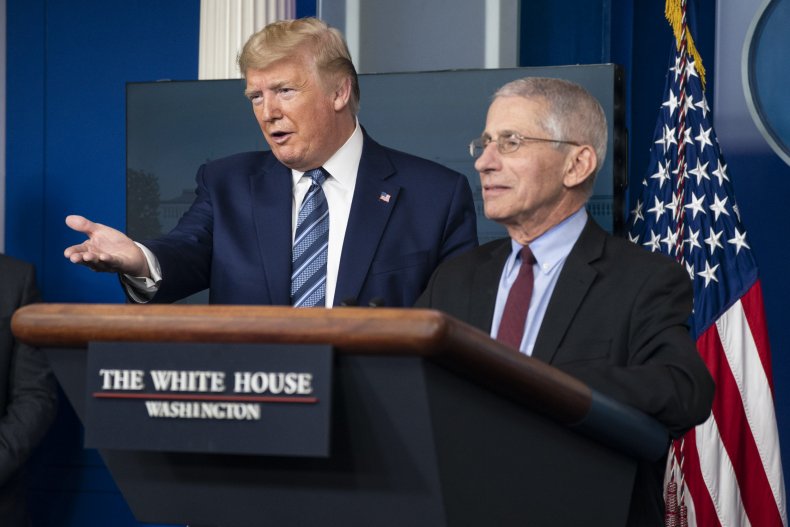 President Donald Trump and Anthony Fauci, director of the National Institute of Allergy and Infectious Diseases, hold a press briefing with members of the White House Coronavirus Task Force on April 5, 2020 in Washington, D.C. The president prevented Fauci from answering a question on hydroxychloroquine. Sarah Silbiger/Getty

Given the opportunity to answer the question the anti-malarial drug on CBS’s Face The Nation, Fauci sought to make clear that: “In terms of science, I don’t think we can definitively say it works.”

“The data are really just at best suggestive,” Fauci explained. “There have been cases that show there may be an effect and there are others to show there’s no effect.”

According to The New York Times, Fauci has also privately spoken out against championing hydroxychloroquine as a potential solution until more is known about the drug’s effect on coronavirus.

When discussion around the use of chloroquines in the fight against COVID-19 arose, Fauci reportedly maintained that there was a need for further rigorous testing on the anti-malarial drug.

Despite Fauci’s warnings, Trump continued to push for the widespread use of hydroxychloroquine on Sunday, prompting a wave of Twitter users to call on broadcasters to “#StopAiringTrumpNow” and for the White House to host “#DoctorsOnlyPressConferences”.

Rep. Tavia Galonski tweeted in response to Trump’s remarks, “I can’t take it anymore. I’ve been to The Hague. I’m making a referral for crimes against humanity tomorrow.”

“Today’s press conference was the last straw,” the Democrat added. “I know the need for a prosecution referral when I see one.”

“I know #Trump can hear the sirens from the @WhiteHouse,” artist and activist Jessicka Addams wrote. “No matter what he is not listening,” she said, including the hashtag “#DoctorsOnlyPressConferences.”

I canâ€™t take it anymore. Iâ€™ve been to The Hague. Iâ€™m making a referral for crimes against humanity tomorrow. Todayâ€™s press conference was the last straw. I know the need for a prosecution referral when I see one. https://t.co/XQin24gqY4

The growing calls for the White House to allow health experts to take the lead on informing the public on the latest updates on efforts to combat the pandemic come as a petition calling for broadcasters to stop sharing live coverage of the briefings has neared more than 300,000 signatures.

Rather than broadcasting live coverage of the White House’s COVID-19 briefings, the MoveOn petition has asked broadcasters to monitor the briefings instead “and have your anchors and correspondents quickly share appropriately edited valuable accurate parts.”

In recent days, broadcasters have started to do just that, with a number of outlets, including CNN and MSNBC, breaking away from coverage of the briefing when the discussion appears to veer away from efforts to combat COVID-19.

Newsweek has contacted the White House and Dr. Fauci for comment.