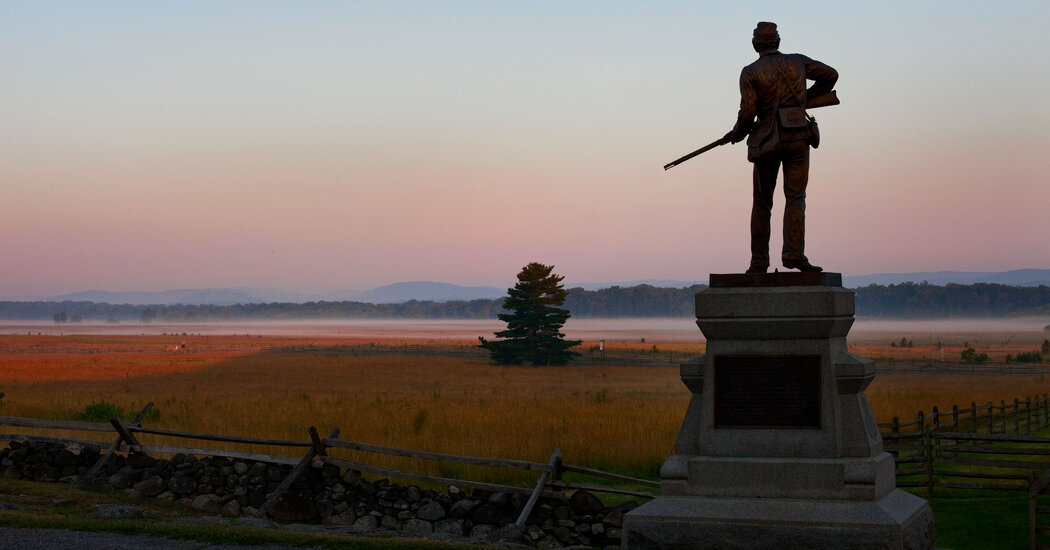 After repeatedly throwing a wrench into plans for the Republican National Convention this summer, President Trump on Monday tried to offer something tantalizing about the upcoming gathering, saying that his renomination speech would take place either at the White House or the Civil War battlefield in Gettysburg, Pa.

It was perhaps a predictable move by the first president to be credited as an executive producer of a network reality show while sitting in office.

But whether Mr. Trump will actually deliver a nationally televised address in Gettysburg — the site of the Civil War’s bloodiest battle, a place memorialized in 1863 by Abraham Lincoln as hallowed ground — remains an open question.

The battlefield, where Mr. Trump gave an indoor campaign speech in 2016, is federal property run by the National Park Service. This presents the same ethical conundrums his re-election team will face if the president delivers the speech from the South Lawn of the White House.

In private, Mr. Trump has expressed to aides more interest in delivering his address at the White House, in part because of the ease of arranging the speech, set for Aug. 27, in a short time frame.

Mr. Trump was originally scheduled to accept his renomination in Charlotte, N.C., the Republican convention’s host city, but in June he moved his speech to Jacksonville, Fla., to try to avoid safety requirements like social distancing and mask-wearing. In July he pulled the convention out of Jacksonville as coronavirus cases surged in Florida.

The president is not subject to the Hatch Act, a Depression-era law that prohibits federal employees from engaging in political activities while on the job. But everyone who works for him is. By delivering a speech with the Gettysburg battlefield as a backdrop, experts said, Mr. Trump would risk putting park rangers and other park employees at risk of a violation.

“Applicable law does provide a variety of technical exemptions, which a clever lawyer might stitch together to claim that this is permissible,” said Norman L. Eisen, who served as the chief ethics czar in the Obama White House. “But those loopholes do not contemplate an event of this highly partisan nature of this scope and scale, and the forced political labor of the hundreds, if not thousands, of federal personnel.”

Mr. Eisen added: “The park rangers will appear as political window dressing at the event. No normal president of either party would even try it, and no normal White House or campaign lawyers would support it.”

Mr. Trump and his aides, however, have barely blinked at the possibility of Hatch Act violations — and some even refer to racking them up as a point of pride.

“Convention events will be planned and executed, at whatever venue, by the Trump campaign” and the Republican National Committee, said Judd Deere, a White House spokesman. “Any government employees who may participate will do so in compliance with the Hatch Act.”

There have been past occasions when presidents used federal property for campaign purposes. President Barack Obama filmed two campaign videos in 2012 from his chief of staff’s office in the West Wing, for instance.

But Mr. Trump’s critics said using federal property as the backdrop for what will be one of the president’s peak political moments would amount to a more serious violation of the often hazy line between candidate and public servant. The New York Times reported last week that a Trump speech at Gettysburg was under discussion.

Plans for the Democratic National Convention next week came into focus on Monday, as three party officials with knowledge of the schedule said that Hillary Clinton would deliver a prime-time speech on Wednesday.

Former Vice President Joseph R. Biden Jr. has said he will not travel to Milwaukee, where the convention is nominally being held but has been scaled back to just a few hundred attendees. He will accept his party’s nomination from his home state, Delaware, on the convention’s final night on Thursday, in a form and fashion yet to be announced.

Senator Elizabeth Warren of Massachusetts will join Mrs. Clinton, the 2016 nominee, on the Wednesday program if she is not selected as Mr. Biden’s running mate, according to the officials. Former President Bill Clinton will speak as well, one of the officials said.

Senator Bernie Sanders of Vermont and former Gov. John Kasich of Ohio, a Republican who is a harsh critic of President Trump, will deliver addresses Monday night, the officials said.

Mr. Obama’s time slot has not yet been announced, but he may be included on a crammed Wednesday night program, or possibly introduce Mr. Biden on Thursday before the former vice president’s acceptance speech.

Representative Alexandria Ocasio-Cortez of New York, a rising star of the Democratic Party’s progressive wing, is also set to deliver a brief speech, according to three people with direct knowledge of the situation.