In a wide-ranging speech at a campaign rally Saturday night, President Donald Trump ramped up attacks against his opponent, Joe Biden, calling Biden the “dumbest of all candidates,” and went so far as to declare, “maybe I’ll sign an executive order that you cannot have him as your president.” 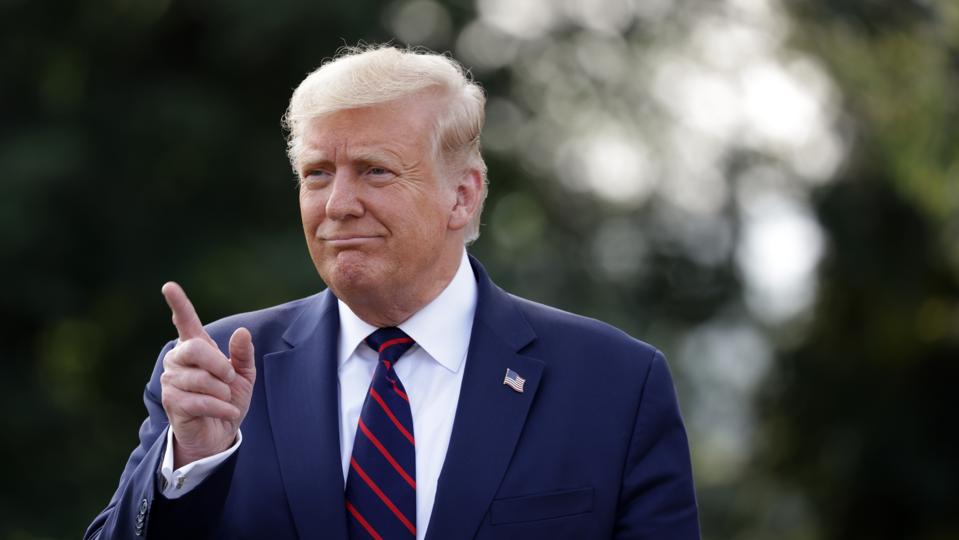 U.S. President Donald Trump speaks to members of the press prior to his departure from the White … [+] House on September 15, 2020 in Washington, DC. President Trump was traveling to Philadelphia to participate in an ABC News town hall event. (Photo by Alex Wong/Getty Images)

Trump also expanded on his unproven claim that Biden is on drugs, stating, “they gave him a big fat shot in the ass… and for two hours, he is better than ever before. Problem is, what happens after that?”

The first debate between the two candidates is scheduled for September 29th, with moderator Chris Wallace of Fox News, and Trump said Saturday, “we’re going to ask for a drug test. We are. I’d like to have a drug test.”

At one point in the speech, Trump seemingly threatened to attempt to ban Biden from being elected President of the United States.

Prominent Democrats have expressed serious concerns that Trump may refuse to leave office should he lose the election in November. When asked by Fox News’ Chris Wallace in July, if he would accept the election results, Trump said, “I have to see. Look, you — I have to see. No, I’m not going to just say yes. I’m not going to say no, and I didn’t last time, either.” Earlier this summer, Trump suggested delaying the presidential election, in which he trails by double-digits in many polls. “With Universal Mail-In Voting (not Absentee Voting, which is good), 2020 will be the most INACCURATE & FRAUDULENT Election in history. It will be a great embarrassment to the USA. Delay the Election until people can properly, securely and safely vote???” Trump tweeted in late July. Earlier this month, Vermont Senator Bernie Sanders warned that Congress and the media should begin to prepare for a scenario in which Trump refuses to willingly leave the White House. “This is not just idle speculation,” said Sanders. “What we have got to do in the next two months is to alert the American people about what that nightmarish scenario might look like in order to prepare them for that possibility and talk about what we do if that happens.” Back in May of 2019, House Speaker Nancy Pelosi said, “We have to inoculate against that, we have to be prepared for that,” when discussing her concern that Trump would not give up power voluntarily if he lost re-election.

“If I lose to him, I don’t know what I’m going to do,” Trump said Saturday night. “I will never speak to you again. You’ll never see me again.”

Trump confirmed on Saturday night that he will nominate a woman to replace the late Supreme Court Justice Ruth Bader Ginsburg in the coming days. “I will be putting forth a nominee next week. It will be a woman,” Trump said. “I think it should be a woman because I actually like women much more than men.”

44: That’s the number of days until November 3rd, Election Day.

Sanders: America must be prepared for when Trump refuses to leave office (Politico)