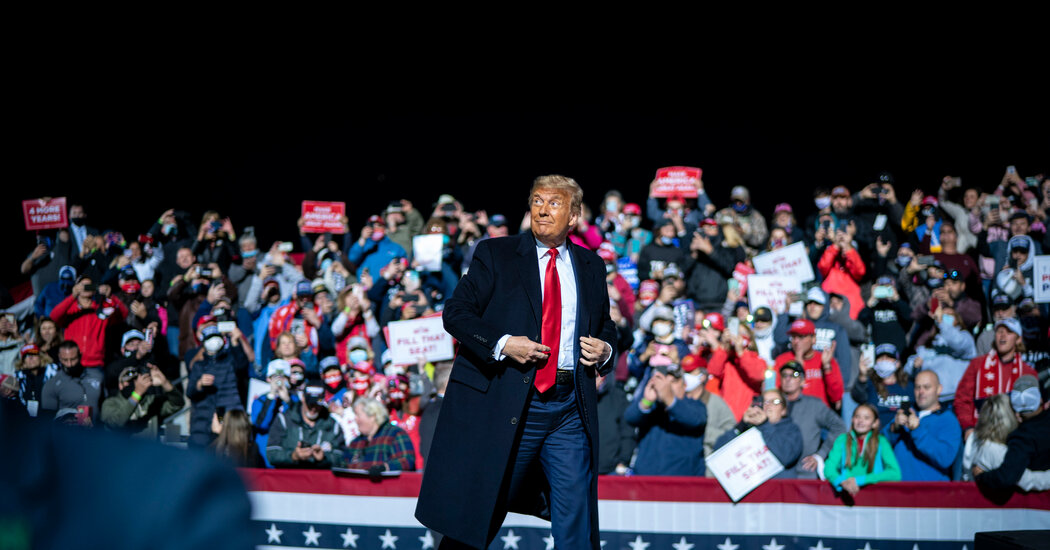 WASHINGTON — With just three weeks until Election Day, and President Trump on the defensive in every major battleground state, the president’s top aides know they must change the trajectory of the race.

So as Mr. Trump returns to the campaign trail this week after being hospitalized for his coronavirus infection, his advisers are sending him out with a teleprompter, as they at times did before his diagnosis, in hopes he’ll drive a more coherent message against his Democratic opponent, former Vice President Joseph R. Biden Jr.

And on Tuesday night, in a more pointed effort to nudge Mr. Trump toward his script, the president’s campaign also shared excerpts with reporters of the speech they said he would deliver upon landing for his rally in Johnstown, Pa., about 70 miles east of Pittsburgh.

Mr. Trump did read some of the staff-written remarks in his speech, which lasted just over an hour.

Trying to revive his 2016 coalition in a part of Pennsylvania where he needs to run up his margins, the president scorned Mr. Biden as “a servant of the radical globalists” who “shipped away your jobs, shut down your factories and, you know it because you really suffered right in this area, threw open your borders and ravaged our cities.”

Yet the president also made clear he had other issues on his mind besides the populist message that his campaign wanted him to give in Johnstown. Namely, how embarrassing it would be to lose to an opponent he has repeatedly mocked as being senile.

“I’m running against the single worst candidate in the history of presidential politics, and you know what that does?” Mr. Trump said. “That puts more pressure on me.” He added: “Can you imagine if you lose to a guy like this? It’s unbelievable.”

Trailing by double digits in national surveys and by similarly daunting margins in critical states like Pennsylvania, the president who predicted the country would “get tired of winning” seemed preoccupied with the idea of losing.

“He has no idea what he’s saying,” Mr. Trump said, returning to Mr. Biden’s mental health. “How the hell do you lose to a guy like this, is this possible? Oh, I’ll never come to Pennsylvania again.”

The president is trailing in the state by seven percentage points, according to a New York Times-Siena College poll taken this month, in large part because Mr. Biden is overwhelming him in the state’s metropolitan areas. This also appeared to register with Mr. Trump, and he used his remarks to directly address the constituency that is most imperiling his candidacy.

“Suburban women: Will you please like me?” he asked. “Please. Please. I saved your damn neighborhood, OK?”

Even though he was on the other side of the state from Philadelphia, and speaking in a long-distressed former steel community, Mr. Trump boasted that he had “saved suburbia” in America.

And he predicted that his fortunes with female voters, who in the recent Times survey were supporting Mr. Biden by 15 points, would turn around.

“We’re going to see that the women really like Trump a lot,” Mr. Trump said, repeating the falsehood that he won women with 52 percent of the vote in 2016 (Hillary Clinton won 54 percent of women, according to exit polls).

The president has repeatedly suggested on Twitter in recent days that his party’s lawmakers should pass a large coronavirus relief package, but for the second consecutive night, he did not use his rally to pressure them to approve a bill. The only demand he made was directed at Pennsylvania’s Democratic governor, Tom Wolf, who Mr. Trump said should end social distancing restrictions and “open up” the state.

Perhaps the most striking language from Mr. Trump’s speech that was not included in his prepared text was an acknowledgment that he is practicing “risky” behavior by appearing in public so soon after falling ill with a highly contagious disease.

Continuing to minimize the risk of transmission, as he did even before he contracted the virus, Mr. Trump proclaimed in front of an array of people wearing “MAGA”-emblazoned masks, “Now, I’m immune.”

Then he said he could prove it.

“I could come down and start kissing everybody,” he told his supporters, echoing a line he used the day before in Florida. “I’ll kiss every guy — man and woman. Look at that guy, how handsome he is. I’ll kiss him. Not with a lot of enjoyment, but that’s OK.”