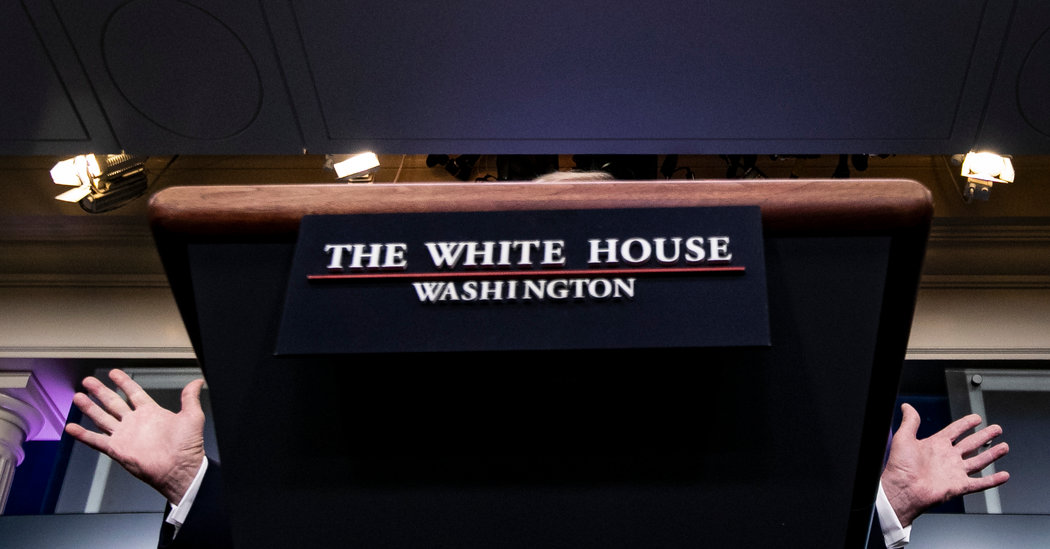 SAN FRANCISCO — Mark Zuckerberg, Facebook’s chief executive, said in March that promoting bleach as a cure for the coronavirus was “misinformation that has imminent risk of danger” and that such messages would immediately be removed from the social network.

President Trump has now put Mr. Zuckerberg’s comments to the test. At a White House briefing last week, Mr. Trump suggested that disinfectants and ultraviolet light were possible treatments for the virus. His remarks immediately found their way onto Facebook, Instagram and other social media sites, and people rushed to defend the president’s statements as well as mock them.

But Facebook, Twitter and YouTube have declined to remove Mr. Trump’s statements posted online in video clips and transcriptions of the briefing, saying he did not specifically direct people to pursue the unproven treatments. That has led to a mushrooming of other posts, videos and comments about false virus cures with UV lights and disinfectants that the companies have largely left up.

A New York Times analysis found 768 Facebook groups, 277 Facebook pages, nine Instagram accounts and thousands of tweets pushing UV light therapies that were posted after Mr. Trump’s comments and that remained on the sites as of Wednesday. More than 5,000 other posts, videos and comments promoting disinfectants as a virus cure were also on Facebook, Instagram, Twitter and YouTube this week. Only a few of the posts have been taken down.

The social media companies have always trod delicately when it comes to President Trump. Yet their inaction on posts echoing his remarks on UV lights and disinfectants stands out because the companies have said for weeks that they would not permit false information about the coronavirus to proliferate.

Apart from Mr. Zuckerberg’s saying Facebook would take a stand, Twitter announced in March that it would delete virus tweets “that could potentially cause harm.” YouTube has repeatedly said it removes videos that show medically unsubstantiated coronavirus treatments. And all of the companies have said they would promote virus information from authoritative health sources like the World Health Organization.

On Wednesday, Mr. Zuckerberg reiterated that Facebook would not tolerate virus falsehoods. In an investor call, he cited the example of “inhaling water” to cure the coronavirus as dangerous misinformation that the social network would remove.

Renee DiResta, a technical research manager at the Stanford Internet Observatory, said most of the tech companies developed health misinformation policies “with the expectation that there would be a competent government and reputable health authority to point to.” Given that false information is coming from the White House, the companies have been thrown for a loop, she said.

The difficulties for Facebook, Twitter and YouTube have been compounded because they would risk ire from the right if they deleted Mr. Trump’s comments and appeared to censor him. The president has previously accused Facebook, Google and Twitter of suppressing conservative voices on their platforms.

“The question of whether to take down” the president’s comments on social media “is an unwinnable argument,” said Claire Wardle, executive director of First Draft, an organization that fights online disinformation.

Facebook, which owns Instagram and WhatsApp, said it continued “to remove definitive claims about false cures for Covid-19, including ones related to disinfectant and ultraviolet light.” YouTube said Mr. Trump’s comments did not violate its misinformation policy. Twitter said satire and discussions of Mr. Trump’s remarks that did not include a call to action, as well as his comments themselves, did not violate its policies.

The social media companies came under scrutiny after Mr. Trump, at his daily White House briefing on the virus last Thursday, floated the idea that an “injection inside” the human body with a disinfectant could help combat the illness. He then turned to Dr. Deborah Birx, the coronavirus response coordinator, and asked if she had heard of using “the heat and the light” to treat the coronavirus.

“Not as a treatment,” Dr. Birx said, before Mr. Trump cut her off.

Medical experts and scientists immediately pounced on the comments as medically unsafe and urged people not to inject themselves with disinfectants or bleach.

Last Friday, after right-wing news outlets such as Breitbart published articles saying Mr. Trump’s words were being taken out of context, the president said he had made his comments about UV lights and disinfectant injections sarcastically.

By then, his remarks had already spread widely. Last Friday, mentions of a disinfectant cure on social media and television broadcasts spiked to 1.2 million, up from roughly 400,000 the day before, according to Zignal Labs, a media insights company.

Mr. Trump’s supporters also went to work online. Many found videos promoting UV light as a cure and shared them as evidence of support for the president’s remarks. They often cited Aytu BioScience, a pharmaceutical company that posted a video last Friday depicting an experimental UV technology designed to be inserted via a catheter into a patient to kill the coronavirus. That video has been mentioned across the internet and TV more than 17.1 million times since the Thursday briefing, according to Zignal Labs.

YouTube removed the video after The Times contacted the company about it; a spokeswoman said the video promoted an unsubstantiated medical treatment. Aytu BioScience did not respond to requests for comment.

Other supporters of Mr. Trump also posted their defense of the president’s comments on injecting disinfectant. Angela Stanton-King, a former reality-TV star who was pardoned by Mr. Trump this year for her role in a car-theft ring, tweeted on Friday, “I’m convinced Trump plays the media for the fools they are.” She added a video of a patient appearing to receive UV light therapy “to kill viruses and bacteria.”

“My tweet stands for itself,” Ms. Stanton-King, a Republican who is running for Congress against Representative John Lewis, a Democrat in Georgia, said in an emailed statement. “It seems to me that President Trump is trying to lead the country through these unprecedented times, while everything he says and does is distorted by the mainstream media looking for ratings.”

This week, posts about alternative UV therapies that referred to Mr. Trump spread widely on Facebook. More than 700 posts about the unproven treatments — published after the briefing — collected over 50,000 comments and likes, according to the Times analysis.

In some Facebook groups that have hundreds of thousands of followers, people posted photographs of chemical agents that they said they planned to consume. Mr. Trump, they wrote, had sent them “a message” about a possible cure. In hundreds of comments, people also offered advice on how to procure and ingest the disinfectants.

On YouTube, the top 10 search results for Mr. Trump’s comments returned videos from traditional news sources like CNN and Politico. But YouTube videos defending the president’s suggestion of UV lights and disinfectants were reposted and shared in thousands of right-wing Facebook communities, private chats and online forums, according to the Times analysis.

On Twitter, The Times found more than 45,000 tweets discussing bleach and UV light cures for the coronavirus that stemmed from the president’s comments. Many of the posts said Mr. Trump was right about his suggested treatments.

“Chlorine Dioxide is a ‘bleaching disinfectant’ that’s often added to municipal water systems to make water SAFE to drink,” one tweet said. “And here the fake news media and the ‘medical experts’ they work with are telling you that you may die from drinking something like it.”

David Brenner, director of the Center for Radiological Research at Columbia University, saw his own studies on using UV lighting in public spaces to kill the coronavirus cited widely on Twitter. He said his research was never meant to be explored as a cure for the virus in the human body.

When told that his research had been shared nearly 300 times on Twitter, mostly by Mr. Trump’s supporters, and had reached 1.3 million people, Mr. Brenner was astounded.

“I never imagined that I was going to become a hero of the right wing,” he said.