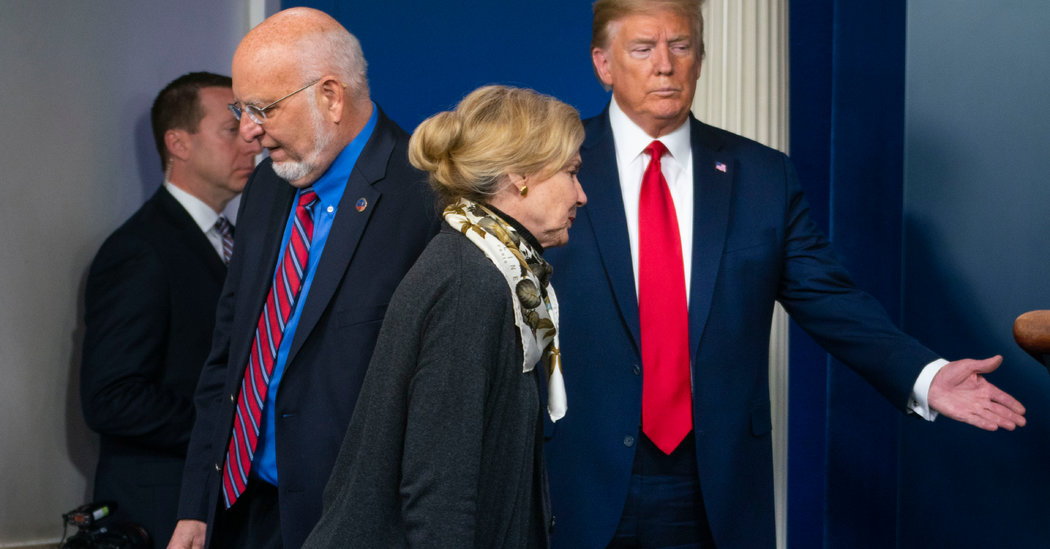 The scientists flanking him at a White House briefing explicitly said otherwise.

“There will be coronavirus in the fall,” Dr. Anthony S. Fauci, the federal government’s top infectious disease expert, said as Mr. Trump looked on.

More than 40,000 Americans have died from the coronavirus, and the outbreak is still well underway. But in his public remarks, Mr. Trump has continued to broadcast his personal hopes for the virus, questioning its ability to last into the fall and winter.

“If we have embers of corona coupled with the flu,” Mr. Trump said, “it’s not going to be what we’ve gone through in any way, shape or form,” after saying, “It’s also possible it doesn’t come back at all.”

The president’s latest assertion seemed prompted by his anger with The Washington Post over an interview with Dr. Robert R. Redfield, the director of the Centers for Disease Control and Prevention, published a day earlier. In that interview, Dr. Redfield warned that fall and winter would be taxing on Americans because influenza and the coronavirus would be circulating at the same time.

“He was misquoted,” Mr. Trump said.

“His whole purpose in making the statement was to get a flu shot so that next fall we don’t have such a big season of flu,” the president continued.

But when pressed by reporters, Dr. Redfield said he had been accurately quoted. “There’s a possibility that the assault of the virus on our nation next winter will actually be even more difficult than the one we just went through,” he said in that interview.

On Wednesday, directed by the president to take the stage, Dr. Redfield said, “When I commented yesterday that there was a possibility of next fall and winter, it could be more difficult, more complicated when we had two respiratory illnesses circulating at the same time.”

He added: “I didn’t say that this was going to be worse. I said that this was going to be more difficult.” Taking the lectern to quibble with reporters over the article — which had the headline “C.D.C. Director Warns Second Wave of Coronavirus Is Likely to Be Even More Devastating” — Mr. Trump said that Dr. Redfield did not actually know if “the corona” would come back, and that he had spoken to the doctor at “great length” about his comments.

Asked how he could repeatedly assert that the coronavirus would come back in pockets or not at all by the winter, Mr. Trump said multiple times that there was reason to believe it might not. Health experts — including Dr. Redfield — have stressed that Americans need to be prepared either way.

When pressed by reporters, Dr. Deborah L. Birx, the White House coronavirus response coordinator, did not directly support the president’s assertion. But Dr. Fauci, another leading scientific voice for the administration, supported Dr. Redfield’s assertion that the virus would be here in the fall.

“What Dr. Redfield was saying, first of all, is that we will have coronavirus in the fall. I am convinced of that,” he said, adding: “It’s going to be complicated. So whether or not it’s going to be big or small is going to depend on our response.”

The president has on multiple occasions suggested that the pandemic would ease off in the summer, despite research showing otherwise. Several small studies have indicated that while warmer temperatures might make it harder for the coronavirus to survive in the air or on surfaces for long periods of time, it could still be contagious for hours, if not days.

Cases have also continued to explode in countries with equatorial climates and those in the Southern Hemisphere, which is currently in the middle of summer.