Supporting President Trump — or even taking him at his word — has always been an exercise in risk tolerance.

“What do you have to lose?” he asked black voters in 2016, suggesting their lives were so bleak that he was worth the gamble.

“What do you have to lose?” he asked coronavirus patients this spring, suggesting their options were so few that an unproven treatment, hydroxychloroquine, probably couldn’t hurt.

And now, as the nation grapples with the dual menaces of racism and a relentless virus, the once-rhetorical questions of Trump-branded risk management have given way to fine-print legal disclaimers about what might happen if people listen to him.

On Saturday, Mr. Trump is scheduled to rally at a packed indoor arena in Tulsa, Okla. Many health authorities say it is a terrible idea. And what attendees have to lose, the campaign claims, is any right to hold the host responsible.

“By clicking register below,” reads a message on the Trump 2020 website, directed at those planning to be there, “you are acknowledging that an inherent risk of exposure to COVID-19 exists in any public place where people are present. By attending the Rally, you and any guests voluntarily assume all risks related to exposure to COVID-19.”

As an encapsulation of the Trumpian worldview, some former associates say, there is perhaps no beating “guests voluntarily assume all risks.”

“You walk into his office, you’re taking a risk,” said Barbara A. Res, a former executive vice president of the Trump Organization. “Something goes wrong, you’re going to get blamed for it.”

But then, an air of danger has been embedded in Mr. Trump’s appeal from the start, the risk its own kind of reward for many supporters in his first whirring slot machine of a presidential campaign.

What could he get away with saying before the whole enterprise went bust? Which sacred cows might fall?

What’s the worst that could happen?

“Admit It,” read a 2015 headline in The Onion, shortly after Mr. Trump became a candidate. “You People Want To See How Far This Goes, Don’t You?”

It went far. And in this moment of national crisis, Mr. Trump’s instinct for dice-rolling has collided with its perils on the grandest scale.

Health officials say his impulse to play down the severity of the virus threat earlier this year informed the federal government’s haphazard response. His personal disdain for mask-wearing as a risk-mitigation measure amounts to a public safety hazard, according to medical experts, who worry about the signal it sends to his fans.

And as the pandemic cedes part of the global foreground to nationwide protests over police brutality and racial inequities, civil rights advocates say Mr. Trump’s consistent race-baiting has only exacerbated tensions in these delicate days, down to the since-abandoned decision to hold the Tulsa rally on Juneteenth.

Mr. Trump has framed the gathering as something of a defiant act regardless, swatting away any health concerns — campaign officials have said that attendees will receive masks on site but not be required to wear them — and accusing opponents of “trying to Covid Shame us on our big Rallies.” 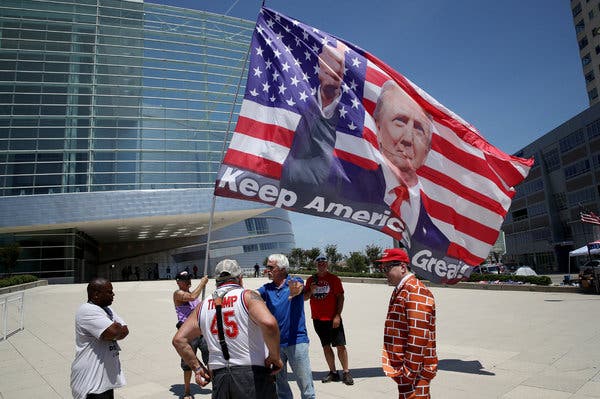 Guests attending Mr. Trump’s rally in Tulsa on Saturday had to accept that they “voluntarily assume all risks related to exposure to COVID-19.”Credit…Win Mcnamee/Getty Images

Some who know Mr. Trump believe that much of the electorate has grown tired of his fate-tempting gambits, even as they expect the 2020 race to tighten eventually against former Vice President Joseph R. Biden Jr., the presumptive Democratic nominee who holds a solid lead in most polls.

“This was sexy and exciting in 2015, 2016,” said Sam Nunberg, a former Trump adviser who worked for him early in his first run. “But for people that have known Donald Trump for a long time like me, I was always worried that he wouldn’t wear well. And he’s at that place now, I think, where he’s not wearing well.”

Mr. Trump seems disinclined to trust anyone else’s judgment on this score, a hesitation born of experience. His life is, if nothing else, a testament to the power of irrepressible salesmanship and taking chances — or at least appearing to take chances — that the risk-averse might discourage.

Throughout his business career, Mr. Trump embraced the label of risk-taker while often eliding the reality of who was assuming much of the risk, spinning failures as successes in the popular imagination.

Gwenda Blair, a biographer of the Trump family, recalled the lessons the president learned from Roy Cohn, the notorious lawyer who mentored him. “The school of Roy Cohn was: You can get away with almost anything,” she said, “that there is in fact not very much risk if you come into the world wealthy, insulated and have enormous political and financial clout when you’re in diapers.”

As his stature grew, Ms. Blair said, Mr. Trump aimed to “make himself big enough that he would push the risk off on everyone else, on all the lenders and banks all the way down to the lowest tradesman and subcontractor who didn’t get paid.”

For Mr. Trump, the psychological upsides were clear. “In some kind of mental jujitsu way, he always wins,” she said. “So, personally, risk isn’t an issue.”

Politically, Mr. Trump can often appear to be operating under similar conditions. He has watched many doomsaying predictions about his behavior come and go — often, it seems, without much lasting consequence, to his mind.

Foreign policy acts criticized as reckless — swaggering tweets about North Korea; the drone attack that killed Maj. Gen. Qassim Suleimani, the powerful Iranian commander — have not produced a world war, even as some diplomats continue to doubt their wisdom.

This is a president who stared into an eclipse because he was curious, without scorching his eyes.

Many supporters likewise view the president as a wager validated, from voters on the Christian right who looked past his personal conduct to conservative policy minds who reasoned that he was likelier to help their cause than Hillary Clinton.

“A Hillary Clinton presidency is Russian roulette with a semi-auto,” read a widely circulated pseudonymous essay in the Claremont Review of Books in September 2016, urging right-leaning skeptics to come aboard. “With Trump, at least you can spin the cylinder and take your chances.”

The author, later revealed to be Michael Anton, went on to join the Trump White House. His metaphor has persisted among those who say that any of the president’s drawbacks pale in comparison to a liberal alternative’s.

Yet rarely have the physical stakes of the Trump age been quite so literal as they will be on Saturday night, with a presidential rally overriding medical warnings.

Republicans have said that the crowded protests against police violence prove that there is bipartisan agreement on the value of mass assembly even during a pandemic. Some suggested there were also cultural forces behind the outsize interest in Mr. Trump’s event, despite the health worries.

“Conservatives are more inclined to want to decide things for themselves,” said Tim Pawlenty, a former Minnesota governor and Republican presidential candidate. “They may not have a lower risk tolerance, but they do have a lower tolerance for government telling them what to do.”

Of course, the leader of this government would counsel them to take the leap anyway.

In his own writings (or ghost-writings) on risk, peppered throughout his many pre-presidential how-to books, Mr. Trump has generally come down on the side of welcoming it.

Some decisions backfire, he allows. But what do you have to gain by playing it safe?

“Sometimes,” Mr. Trump advises in one tome, titled “Think Like a Champion,” “being too cautious is the greatest risk of all.”