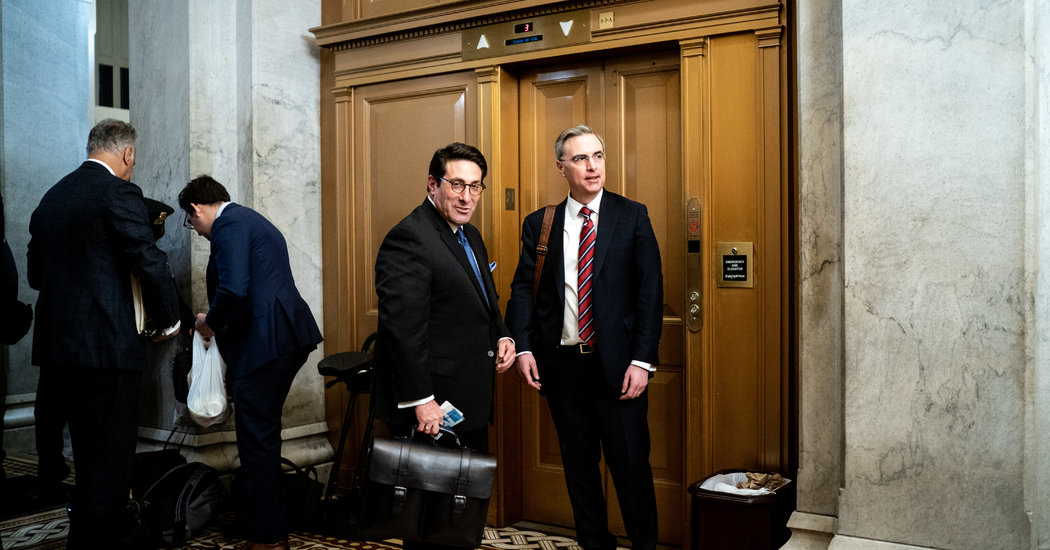 WASHINGTON — When President Trump’s impeachment trial opened this week, the Democratic House managers prosecuting the case piled their table high with binders and notepads. Only a few rested on the defense table.

The contrasting amount of material the two legal teams brought into the Senate chamber to support their initial arguments foreshadowed a broader difference in their approaches to the trial.

In its opening days, the House managers have focused on the facts. They are trying to build a clear and coherent story around their theme that the president abused his power — delving into the details, putting up slides to summarize major points, and playing a well-organized selection of video clips of statements by Mr. Trump and by House witnesses.

Eschewing props, the defense team has focused instead on the process. They have used their time to reinforce the House Republican theme that impeachment is a sham and unfair to Mr. Trump — urging the Senate to swiftly dispose of the case without subpoenaing any additional documents or testimony.

Their strategy appears based on a narrative that is familiar from Mr. Trump’s Twitter feed and Fox News programming — that the impeachment is unfair — and amplify it to a group that already believes it: Mr. Trump’s core supporters, a bloc in the Republican Party that can threaten the political future of any Republican senator either by backing a primary challenger or by failing to turn out during a general election.

“They have the senators in mind, but also the broader public,” said David Alan Sklansky, a Stanford University criminal law professor and former prosecutor. “The president’s side wants to keep the heat on Republican senators to make sure they stay inside the tent.”

Meanwhile, the House managers, led by Representative Adam B. Schiff of California, a former federal prosecutor, are plowing ahead trying to lay out their case that Mr. Trump seriously abused his powers, a message aimed at the voters who will decide his fate in November as well as the senators who are unlikely to remove him now.

Mr. Schiff led off the House team’s case with a polished, confident performance, speaking extemporaneously at some points as he methodically outlined the Democratic case with the style of the former prosecutor he is. He dispensed with some of the more grandiose language that has occasionally flavored Democratic speeches against Mr. Trump and tried to link together the testimony and documents into a narrative for senators to follow.

The other managers followed, each given a specific assignment to discuss certain parts of the case against Mr. Trump, but none with quite the ease and fluidity of Mr. Schiff, who has been Speaker Nancy Pelosi’s point man on impeachment since the beginning.

He dominated the day as the main presenter, spending more time at the lectern than all six other managers.

But Mr. Schiff has also become a lightning rod among Republicans who seethed at what they saw as his self-righteousness and accused him repeatedly of mischaracterizing the evidence. He has become such a favorite villain for Republicans that they use him to rally their side.

In some respects, Mr. Schiff and the other House managers are facing the classic challenge for prosecutors, legal specialists said. It is always the government’s challenge in a trial to try to establish clarity, while defense teams need only muddy the waters and raise reasonable doubts to win an acquittal. They are also facing a jury that gets to decide for itself what the law means and whether to hear witnesses, and that is hardly made up of neutral people.

The details of the broader Ukraine affair — the monthslong campaign of pressure Mr. Trump and his proxies, including his personal lawyer Rudolph W. Giuliani, brought on Ukraine’s president to announce two investigations that could benefit Mr. Trump politically — are complicated things to explain. Mr. Schiff and his colleagues have spent hours dissecting the details to build their case.

Mr. Trump’s White House counsel, Pat A. Cipollone, a longtime civil litigator, has been as combative as his client, the president, both in angry letters he signed during the House phase declaring that the executive branch would not participate, and now in person on the Senate floor. He has been joined by Jay Sekulow, Mr. Trump’s private lawyer, in leading the White House legal team.

While the team’s role was to watch the House managers establish their case on Wednesday, Mr. Cipollone made clear on the opening day that his central message would be one of contempt for the House managers’ efforts.

“A partisan impeachment is like stealing an election,” Mr. Cipollone declared, adding: “It’s outrageous. It’s outrageous. And the American people won’t stand for it, I’ll tell you that right now.”

He sat silent all day on Wednesday but demonstrated on Tuesday that he planned to take an aggressive approach not just defending the president but also assailing his accusers.

Without much history in this kind of public political confrontations, Mr. Cipollone seemed a little nervous at first but quickly warmed to the task and adopted the relentless attack mode of his boss, his voice at times dripping with disdain over the Democrats he deemed partisan hacks and at one point demanding they apologize.

James G. McGovern, a defense lawyer at Hogan Lovells and former federal prosecutor, argued that everyone knows what Mr. Trump did, but that Republicans simply do not believe it was worthy of impeachment. He said the Trump team’s tactics reminded him of an analogy from the criminal trial world: the occasional refusal by a jury to refuse to convict a defendant even if the accusations are true.

Against that backdrop, it was striking that in detailing the argument that the process has been fatally unfair, Mr. Cipollone falsely asserted on Tuesday that Republican lawmakers had not been allowed into the secure room where the House Intelligence Committee deposed witnesses last year.

In reality, dozens of Republican lawmakers from three committees and their staff lawyers participated in those depositions.

Samuel Buell, a Duke University law professor and former federal prosecutor, said the Trump defense bore similarities to the tactic known as putting the government on trial — trying to get a jury to doubt the prosecutors’ case by suggesting the client was a victim of a rush to judgment by incompetent or corrupt law enforcement officials.

“It parallels putting the government on trial in form but not in purpose, because I don’t think that there are senators sitting on the fence going, ‘I might vote for impeachment but not if I lose confidence in the process Adam Schiff used on the House side,’” Mr. Buell said. “This argument is directed at the political arena.”

Mr. Cipollone and his colleagues will get their chance to make their case uninterrupted starting Saturday, although it is possible the White House team may not use all of its allotted 24 hours, meaning it could wrap up by Monday.

Mr. Cipollone’s task at that point will be to deconstruct the House case that has sunk in over three days, arguing not just that the process has been unfair to the president but also that Democrats are trying to achieve through a trumped-up impeachment process what they cannot at the ballot box.