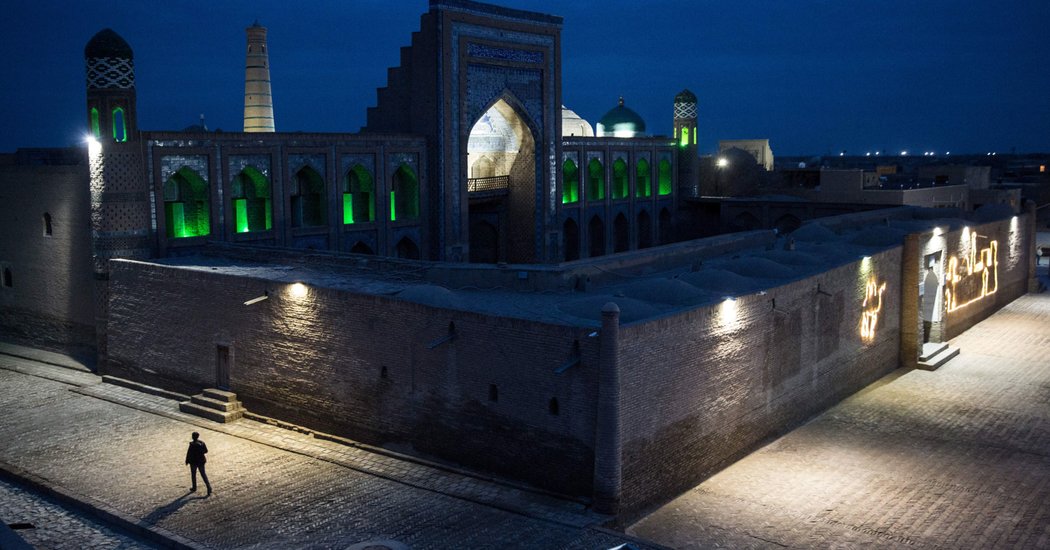 KHIVA, Uzbekistan — Inside the ancient walls of the Silk Road oasis town of Khiva, China has put down a marker of its geopolitical ambitions. A sign promotes a Chinese aid project to renovate a once-crumbling mosque and a faded madrasa.

Outside the town’s northern gate, a billboard-size video screen shows clips of President Shavkat Mirziyoyev of Uzbekistan meeting with world leaders. President Xi Jinping of China features prominently, but there are no shots of President Trump.

That China is advertising its aid efforts so boldly in this remote outpost linking Asia and Europe — where camel caravans once arrived after crossing the Kyzylkum and Karakum Deserts — is the kind of action these days that sets off alarm bells among American officials. The Trump administration is trying with greater force to insert itself into the political and economic life of Central Asia to counter China’s presence. American officials see the countries in the heart of the continent’s vast, arid steppe as critical battlegrounds in the struggle with China over global influence.

“Whenever we speak to countries around the world, we want to make sure that we’re doing what the people of those countries want,” Secretary of State Mike Pompeo said last week at a news conference in Tashkent, the capital of Uzbekistan.

The Uzbeks want a “good, balanced relationship,” he said.

“They have long borders,” he added. “They sit in a region where China and Russia are both present.”

Leaders of the five Central Asian nations that became independent republics after the breakup of the Soviet Union in 1991 — Uzbekistan, Kazakhstan, Kyrgyzstan, Tajikistan and Turkmenistan — are used to walking a regional tightrope. The area was contested during the so-called Great Game of the 19th century, when the British and Russian empires competed to establish influence and control.

Now a new game is underway. And officials in Central Asia, like many of their counterparts around the world, are hedging their bets when it comes to aligning with Washington or Beijing.

“I’d like to once again note that we want to see Central Asia as a region of stable development, prosperity and cooperation,” said Abdulaziz Kamilov, the foreign minister of Uzbekistan. “And we would really not like to feel on ourselves unfavorable political consequences in relation to some competition in our region between large powers.”

The State Department released a Central Asia strategy document on Feb. 5 that said the top priority was to “support and strengthen the sovereignty and independence of the Central Asian states” — a reference to warding off the influence of China and Russia.

It is a tough mission for the United States. The nations are in China’s and Russia’s backyards, and there have been decades of close interactions among them. Mr. Xi has made multiple state visits to the countries since he took power in 2012, most recently last year.

The Trump administration has hit major setbacks in its attempts to build a global coalition against projects by the Chinese government and by Chinese companies. In fact, Britain said on Jan. 28 that it would not ban technology made by Huawei, a Chinese telecom giant, from its high-speed 5G wireless network, despite intense pressure from American officials.

Mr. Pompeo made London his first stop on a recent six-day trip to Europe and Central Asia, and he said there on Jan. 30 that the Chinese Communist Party was “the central threat of our times.” The next day, he spoke about China with leaders in Ukraine.

But words go only so far. The Americans fail to present an economical alternative to Huawei. And the Trump administration is discovering that its belligerent approach toward allies has a cost when it comes to China strategy. Withdrawing from the global Paris climate agreement and the landmark Iran nuclear deal, starting trade conflicts with friendly governments and berating members of NATO make those nations less likely to listen to Washington’s entreaties on China.

A recent policy report on China by the Center for a New American Security said “critical areas of U.S. policy remain inconsistent, uncoordinated, underresourced and — to be blunt — uncompetitive and counterproductive to advancing U.S. values and interests.”

Some analysts say the constant hawkish talk on China by Mr. Pompeo and other American officials paradoxically makes the United States look weak.

“And that last point is just the core of it for me. A central problem of US foreign policy today, not just in Central Asia, is that it feels increasingly reactive to me — back footed and on defense, not least in the face of Chinese initiatives,” Evan A. Feigenbaum, a deputy assistant secretary of state on Central Asia and South Asia in the George W. Bush administration who is now at the Carnegie Endowment for International Peace, wrote on Twitter.

“To wit, the secretary of state just made the first visit by America’s top diplomat to Central Asia in five years — five! — but spent a hefty chunk of it talking about China,” he wrote. “The challenge for the US is to get off its reactive back foot and be proactive and on offense.”

The United States did not pursue serious partnerships in Central Asia until after the Sept. 11, 2001, attacks, when the Pentagon needed regional bases for the war in Afghanistan.

China has taken a different approach. Beijing says it will help build up the region under what it calls the Silk Road Economic Belt, which is part of the larger Belt and Road Initiative, a blanket term for global infrastructure projects that, according to Beijing, amount to $1 trillion of investment. The Trump administration says the projects are potential debt traps, but many countries have embraced them.

The economic liberalization of Uzbekistan under Mr. Mirziyoyev, who took power in 2016 after the death of a longtime dictator, has resulted in greater trade with China.

China is Uzbekistan’s largest trading partner, and trade totaled almost $6.3 billion in 2018, a nearly 50 percent increase from 2017, according to Xinhua, the official Chinese news agency. Chinese goods, including Huawei devices, are everywhere in Samarkand, Bukhara, Tashkent and other Uzbek cities.

Uzbekistan is also committing to being part of rail and road networks that China is building across Central Asia.

Since 2001, China has worked with Central and South Asian nations as well as Russia in a multilateral group, the Shanghai Cooperation Organization, to address security issues.

China’s People’s Liberation Army has gained a new foothold in the region, in the form of a base in Tajikistan’s Pamir Mountains. For at least three years, Chinese troops have quietly kept watch from two dozen buildings and lookout towers near the Tajik-Chinese border and the remote Wakhan Corridor of Afghanistan. The Afghan corridor is a strategic strip of land whose borders were drawn by Britain and Russia during the original Great Game as a buffer zone.

The United States has hundreds of troops at an air base in Uzbekistan that it operates with the Uzbeks. But it wants to move the relationship well beyond the military.

He added that the United States had committed $100 million to programs in Uzbekistan last year, and that it would give $1 million to help develop financial markets and another $1 million to increase trade and “connectivity” between Uzbekistan and Afghanistan.

On his trip, Mr. Pompeo also made a demand regarding human rights in China as he met with officials in Tashkent and Nur-Sultan, the capital of Kazakhstan. He raised the issue of China’s internment camps that hold one million or more Muslims and urged the Central Asian nations, which are predominantly Muslim, to speak out against the camps. In Nur-Sultan, he met with Kazakhs who have had family members detained in the camps.

Yet, as in other predominantly Muslim nations, Central Asian leaders have remained silent on this. (Mr. Trump himself has said nothing, and Mr. Pompeo has been accused of hypocrisy by excluding Taiwan, the democratic island that China threatens, from a religious freedom alliance.)

In December, a Chinese Foreign Ministry spokesman, Geng Shuang, denounced Washington’s prodding of Central Asian nations on the Muslim issue: “If the United States once again tries to get up to its old tricks, it will certainly still be futile for them.”

Trump administration policies perceived as anti-Muslim undermine trust in Washington. On Jan. 31, Mr. Trump added Kyrgyzstan and five other nations, all with substantial Muslim populations, to a list of countries whose citizens are restricted in traveling to the United States. In an interview in Nur-Sultan, a Kazakh television journalist, Lyazzat Shatayeva, asked Mr. Pompeo, “What do you think that signals to the other countries and other governments in Central Asia on why it happened?”

“When the country fixes those things,” he said, “we’ll get them right back in where they can come travel to America.”