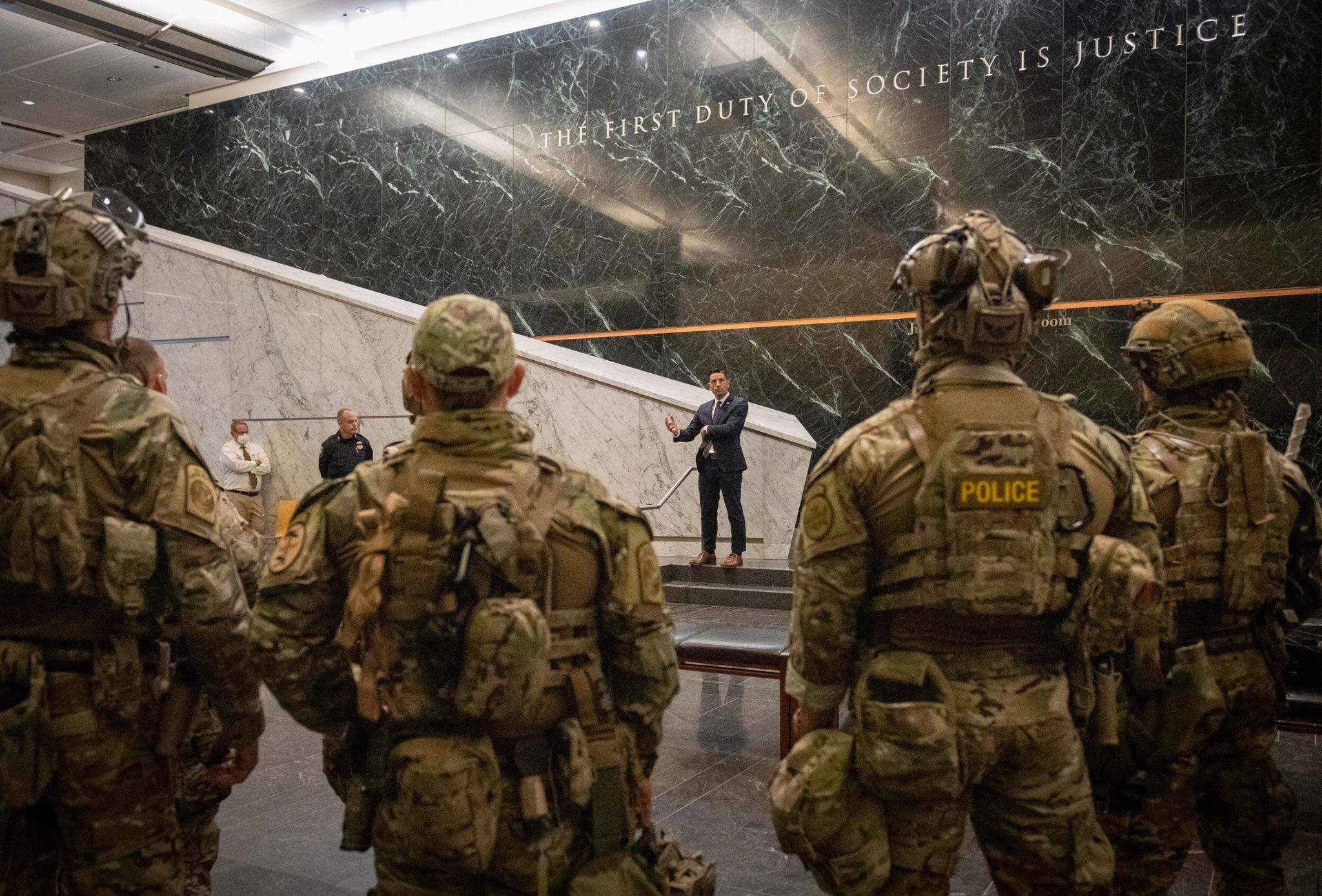 As Portland continues to be rocked by social protests, on Thursday the situation escalated as Acting Department of Homeland Security Secretary Chad Wolf visited the city and protestors accused the federal government of using Gestapo-like tactics. With Portland increasingly looking like a flashpoint among protestors and the federal government, could it foreshadow more violent conflict across America?

The chances are increasing.

Like much of the civic outrage across America, the protests in Portland were sparked following the killing of George Floyd by four Minneapolis police officers. But unlike the other cities where the social protests have become more tempered, the demonstrations in Portland show only a modest degree of slowing down. Many of the protests center around the Mark O. Hatfield Federal Courthouse in downtown Portland, with protestors regularly defacing the building and sparking confrontations with authorities. The nightly occurrences are also a frequent topic of conservative and right-wing media outlets. 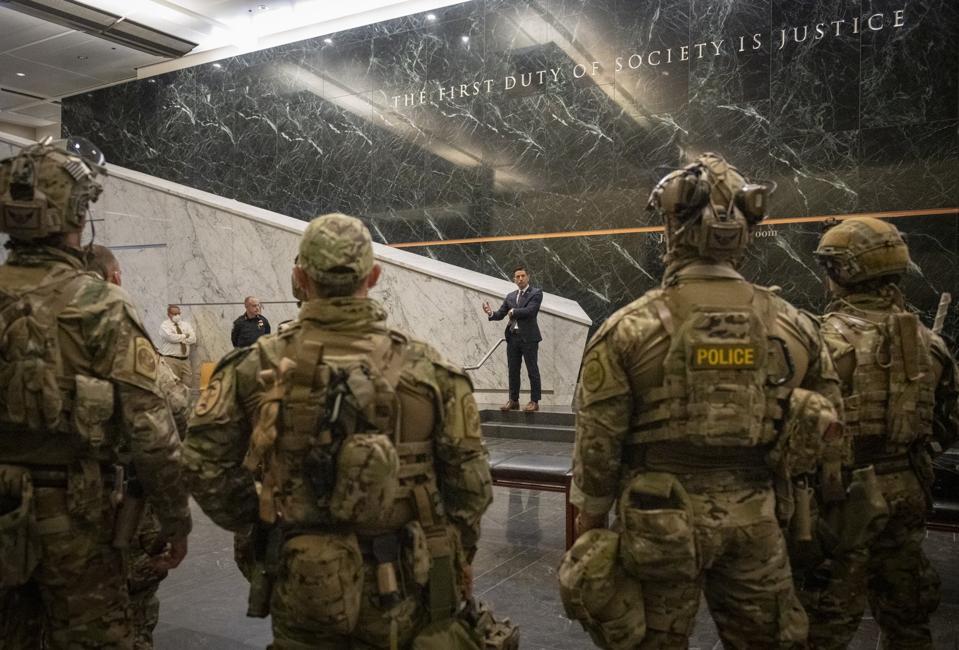 This week a new dimension unfolded as Oregon Public Broadcasting (OPB) and other media outlets detailed reports of unmarked vans with camouflaged federal officers surveying the streets of Portland and arresting protestors. The OPB report of the federal law enforcement actions has been widely shared on social media via personal accounts and phone camera footage, prompting outrage. Many commentators tagged their posts with hashtags such as #TrumpFacism and #Gestopo, the latter being a reference to the secret police used by Nazi Germany.

The outbreak of violence in Portland prompted the federal government to send officers from the United States Border Control’s BORTAC unit, the tactical unit considered the SWAT team of the nation’s border control force. Officers from the U.S. Marshal’s Special Operations group have also been dispatched to Portland to quell the violence. On Thursday, Acting Secretary of the Department of Homeland Security Chad Wolf visited Portland to assess the situation the same day he issued as strongly-worded statement referring to the protestors as “violent anarchists.”

“The city of Portland has been under siege for 47 straight days by a violent mob while local political leaders refuse to restore order to protect their city. Each night, lawless anarchists destroy and desecrate property, including the federal courthouse, and attack the brave law enforcement officers protecting it,” the statement read.

“Instead of addressing violent criminals in their communities, local and state leaders are instead focusing on placing blame on law enforcement and requesting fewer officers in their community. This failed response has only emboldened the violent mob as it escalates violence day after day.” The statement then went on to detail a list of violent actions that have been taken by protestors against federal properties since May 29.

Wolf’s statement, as well as his presence in Portland, comes at a time when President Trump has escalated rhetoric against Portland and other Democratic-controlled cities for failing to address violence in their cities. Both Trump and his Press Secretary Kaitlynn McEnany recently called out Chicago and New York as “Democrat cities not controlling their streets.” McEnany also referred to Chicago Mayor Lori Lightfoot as a “derelict,” which prompted a fierce reply from Lightfoot referring to McEnany as a “Karen.”

All of this comes after a federal officer shot a protestor in the head with a “nonlethal projectile,” drawing a strong rebuke from the Portland City Commissioner Jo Ann Hardesty. Addressing the federal officers’ deployment in Portland, Hardesty was accusatory. “Their presence brought on an escalation of violence towards protesters — an extreme response to a movement challenging police violence,” Hardesty said. “This reckless and aggressive behavior has now put someone in the hospital. Portland Mayor Ted Wheeler echoed the Hardesty’s sentiment. “We do not need or want [the federal officer’s] help,” Wheeler said. “The best thing they can do is stay inside their building, or leave Portland altogether.”

For her part, Oregon Governor Kate Brown also admonished Wolf, accusing him of “being on a mission to provoke conformation for political purposes.” She also pointed blame at President Trump. “The President is failing to lead this nation. Now he is deploying federal officers to patrol the streets of Portland in a blatant abuse of power by the federal government,” Brown said.

The escalating violence on the streets of Portland and the escalating rhetoric between local, state, and federal officials are creating a combustible situation that is likely to play out in other cities across America as the nation hurtles through a summer of rising temperatures and rising tensions. The combination of a worsening pandemic, a deepening recession, and heightened racial tensions are all variables that figure into an unpredictable year that is reshaping America on an almost daily basis. The November presidential election is also adding a degree of uncertainty to America’s political landscape, and with that uncertainty is a rising sense of fear.

Could the protests in Portland, and the federal government’s unconventional approach to interceding, spark an open outbreak in hostilities in Portland or elsewhere? While unlikely, it is possible that the violence sparks unintended consequences and perhaps emboldens groups like the Boogaloo Boys and other right-wing groups to exploit the situation for their own calls for a new American civil war. Either way, by ratcheting up the rhetoric and by refereeing to sieges and anarchists, Chad Wolf is playing with fire.