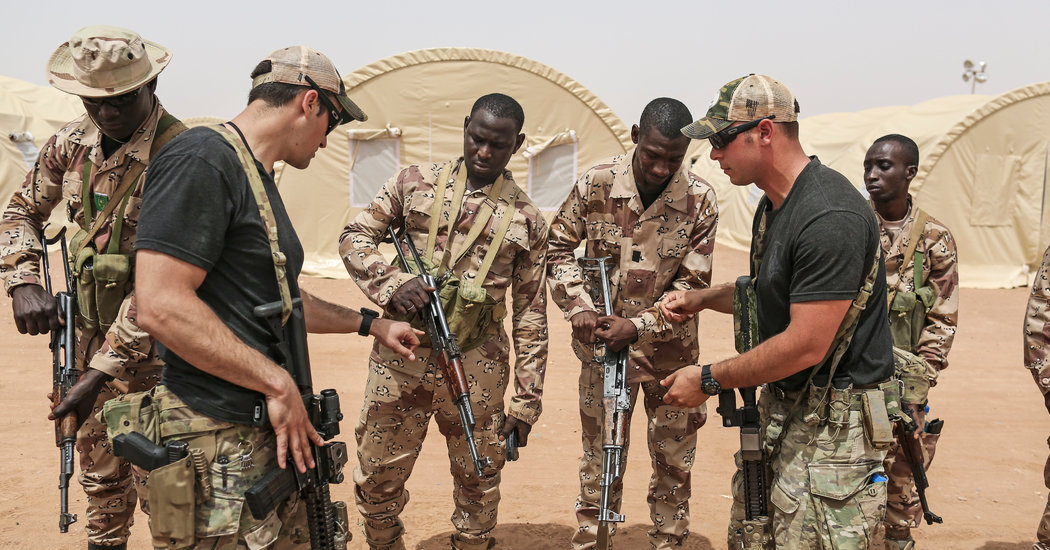 WASHINGTON — The United States military is sharply reducing its emergency casualty evacuation services in West Africa, raising concerns that American troops on missions there could be left vulnerable if they run into trouble at a time when violence is surging in that corner of the continent.

The action by the Pentagon’s Africa Command comes shortly after U.S. military advisers accompanied forces in Niger last month on a major counterterrorism operation near Diffa, a small town on the border with Nigeria that has been a hot spot for attacks by the militant group Boko Haram.

It was the first time American forces in Niger had joined a combat mission alongside their local counterparts since 2017, when U.S. commanders imposed strict guidelines on ground forces. Those new restrictions were imposed after an ambush in October that year near the border with Mali that left four American soldiers dead.

At issue now is the military’s decision to cancel a $23 million annual contract with Erickson, an aviation services company that flies logistics and casualty evacuation flights for Army Green Berets who have been training and advising Nigerien troops for two years in Arlit, a remote city in northern Niger. The Nigerien troops have been conducting operations to intercept terrorists as they flow in and out of Libya.

But that mission has faded. The Green Berets, members of the 20th Special Forces Group from Alabama, are moving some 500 miles southwest of Arlit to carry out a higher-priority mission to help confront a toxic mix of Islamic State and Al Qaeda fighters in the tri-border region of Mali, Burkina Faso and Niger. The Africa Command says it already has enough medevac support for that area and no longer needs Erickson’s two Bell 214ST helicopters.

But some lawmakers and military officials voice concern that the responsibility for handling any casualty evacuation flights will now fall on a single H225 Super Puma helicopter operated from Niamey, Niger’s capital, by another contractor, Berry Aviation. Erickson and Berry currently back up each either if their aircraft cannot fly for mechanical or other reasons.

“A lack of support can have serious results when troops are faced with a hostile and determined foe,” Representative Michael Waltz, Republican of Florida and former Army Green Beret who served in West Africa, said in a letter on March 12 to Pentagon officials, raising questions about the Africa Command’s decision.

Battlefield commanders have described medical aid to troops on the ground as an ethical obligation. The Defense Department in war zones like Afghanistan and Iraq have followed a “golden-hour standard,” in which the military seeks to whisk wounded American troops from the battlefield within an hour of being wounded to give them access to advanced care and the best chance to save their lives.

But in Africa, the time frame for evacuating injured American troops is much longer, particularly in the expanse of West Africa’s Sahel region, a vast sub-Saharan scrubland that stretches from Senegal to Sudan. Niger alone is nearly twice the size of Texas.

In the case of the deadly ambush in October 2017 on the Niger-Mali border, it took more than four hours to evacuate the dead and wounded.

The lack of timely help called into question whether the American military is providing enough resources for troops undertaking dangerous missions in Africa. The large, remote stretches in which American Special Forces operate are inherently dangerous because of their inaccessibility and are conducive to ambushes.

Col. Christopher P. Karns, the chief spokesman for the Africa Command, which is based in Stuttgart, Germany, said that the Erickson contract was not being renewed because the troops Erickson supported were being repositioned.

“Medical evacuation capacity exists where they are moving, so we assess no increased risk to our forces,” Colonel Karns said in response to questions from The New York Times. “Existing resources can meet the needs of repositioned forces.”

The United States has about 1,200 troops in West Africa, with about 800 of them in Niger.

Defense Secretary Mark T. Esper is weighing deep cuts to American troop on the continent, closing a new $110 million drone base in Niger and ending aid to French forces battling militants who are surging in Mali, Niger and Burkina Faso.

Mr. Esper had been expected to make a final decision last month, as part of a global reshuffling of American forces to address new threats from China and Russia. But the coronavirus pandemic and its projected effect on the continent have delayed the process, Pentagon officials said.

Colonel Karns said the decision to end Erickson’s contract in mid-June was made before Mr. Esper’s review got underway, and is not related to the secretary’s assessment.

Kevin S. Cochie, a vice president for Erickson, which is based in Portland, Ore., declined to comment on details of the contract. “Whether it’s U.S. personnel in need or our partner forces, we have launched and responded in the aftermath of unforeseen situations and contributed to saving life and limb,” said Mr. Cochie, a retired Army Special Operations helicopter pilot. “From a business perspective, it’s unfortunate that we are winding down a contract in Africa.”

Erickson’s medevac helicopters were on standby for the American military advisers and the Nigerien forces during the operation in Diffa on March 9-10, but there were no casualties, military officials said.

While Erickson has not been summoned to evacuate wounded American personnel in Niger since late 2017, the company’s helicopters have evacuated Nigerien troops who were wounded in counterterrorism missions, including major operations in December 2019 and January 2020, according to people familiar with the missions.

Erickson supports American troops in other hot spots around the world, including Marine Special Operations forces in the southern Philippines.

Stanley Finch, the president of Berry Aviation, referred all questions to the Africa Command.

Some military officials say the risk of casualties to American service members in West Africa has decreased following the restrictions imposed after the October 2017 ambush. Moreover, U.S. force levels in the region are likely to be cut as a result of Mr. Esper’s review.

But the operation in Diffa last month, in which a dozen or so American advisers helped a much larger force of Nigerian and Nigerien troops target a senior Boko Haram leader, underscores that the risk to American troops still remains.

The Americans set up “a good ways” away from the targeted area, Colonel Karns said. And the mission ultimately failed to capture or kill the militant leader, military officials said.

But if one thing has been made clear for American forces operating in places such as Niger and Somalia, it is that proximity to partner forces and mission objectives has meant little when it comes to deadly attacks.

Even so, the episode suggests the restrictions on American troops accompanying Nigerien forces on high-level missions may be loosening.

“We will continue to support our partners’ initiatives to disrupt violent extremists while managing the risk to our forces,” Brig. Gen. Dagvin R.M. Anderson, who commands U.S. Special Operations forces in Africa, said in a statement. “These mutually beneficial partnerships ultimately help defend U.S. interests and our homeland.”

A former commander of American Special Operations forces in Africa, Maj. Gen. J. Marcus Hicks, said that one broader solution would be to restructure the remaining contract to increase the number of helicopters available for logistics or casualty evacuation duties.

“I would recommend taking a holistic view of adjusting capabilities rather than simply reducing resources,” General Hicks said in a telephone interview.