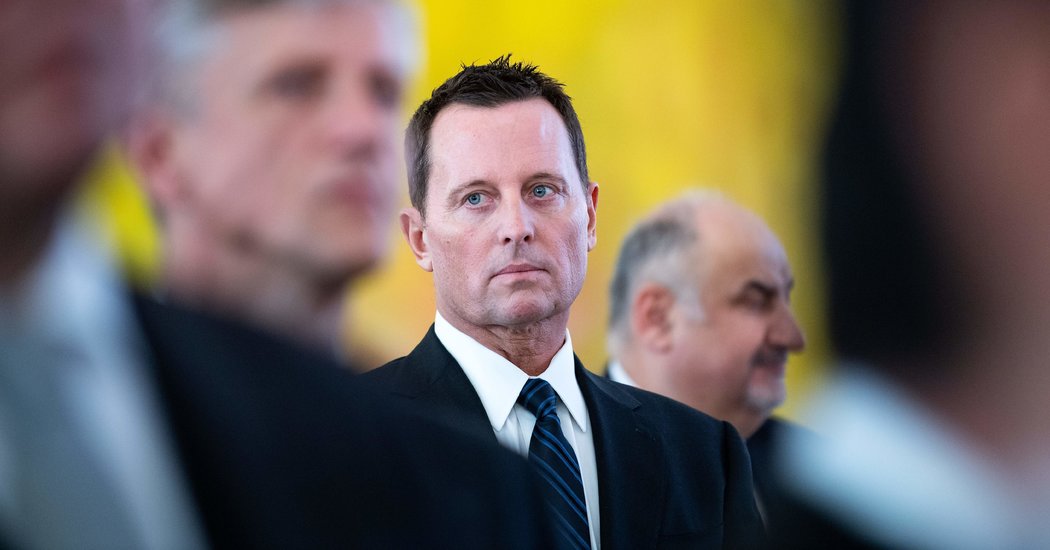 WASHINGTON — The Trump administration is considering cutting back on sharing intelligence with partner countries that criminalize homosexuality as part of a push by the acting director of national intelligence, Richard Grenell, to prod those nations to change their laws.

The intelligence community should be pushing American values with the countries it works with, Mr. Grenell said in an interview this week.

“We can’t just simply make the moral argument and expect others to respond in kind because telling others that it’s the right thing to do doesn’t always work,” he said. But, he added, “to fight for decriminalization is to fight for basic human rights.”

Mr. Grenell is thought to be the first openly gay cabinet member and has put anti-discrimination issues near the top of his agenda. In his earlier post as the American ambassador to Germany, Mr. Grenell began last year assembling gay, lesbian, bisexual and transgender groups from the United States and other countries as part of the administration’s effort to change anti-gay laws.

While tying human rights reforms to national security is often the hallmark of Democratic administrations, mixing hard-power priorities with trade and other issues has been part of President Trump’s foreign policy.

Stuart Milk, head of the Harvey Milk Foundation and nephew of Harvey Milk, the first openly gay elected official in a major American city, said Mr. Grenell reached out to work with his organization on decriminalization. Mr. Milk said he was cleareyed about the Trump administration’s poor record on L.G.B.T. rights, particularly given its efforts to roll back anti-discrimination efforts for transgender troops in the military.

“In some ways, Ric is driving this without a lot of deep support in the administration,” Mr. Milk said. “But I think he is very sincere. He is someone who believes, at the very minimum, decriminalization should happen. And if we have an administration where people wouldn’t suspect this drive to be coming from, it makes it a little bit more powerful.”

Mr. Grenell said he had the backing of the White House. “We have the president’s total support,” he said. “This is an American value, and this is United States policy.”

About 69 countries criminalize homosexuality, mostly in the Middle East, Africa and Southeast Asia. But the list of countries includes some critical American intelligence partners such as Egypt, Saudi Arabia and Kenya.

Mr. Grenell would not say whether the administration was considering withholding additional cooperation, or ratcheting back current intelligence sharing with countries that criminalize homosexuality. His office is forming a group to review the issue and develop ideas, intelligence officials said.

“If a country that we worked in as the United States intelligence community was arresting women because of their gender, we would absolutely do something about it,” Mr. Grenell said. “Ultimately, the United States is safer when our partners respect basic human rights.”

“While the U.S., or any other country, cannot influence how other countries process their domestic affairs, the U.S. can push toward change through the voice of its officials and through the implementation of its programs,” Mr. Damien said.

While Mr. Grenell is serving only in an acting capacity, and his appointment will likely end in September or when the Senate confirms a replacement, he has begun work on some controversial changes, including a review aimed at shrinking the Office of the Director of National Intelligence and sending some officers detailed to that office back to their home intelligence agencies. He has also rebuffed calls by Democrats for him to hold off on those changes.

“I am not a seat warmer,” Mr. Grenell said. “The president asked me to do a job and I am going to the job to the best of my ability.”

In a letter sent last week to the agencies he oversees, Mr. Grenell said the intelligence community needed to do better to detect, and respond to, discrimination and harassment of gay, lesbian and transgender people.

“I expect every I.C. agency to ensure policies are specific and deliberate in protecting the L.G.B.T. work force,” Mr. Grenell wrote.

In the interview, Mr. Grenell said his office was reviewing the security clearance process and the kinds of questions that contractors and F.B.I. agents were asking during background checks. He said he wanted to ensure the process did not lead to transgender people in transition being outed to former colleagues, or gay people who were not out to families being put in difficult positions.

“You have to be sensitive to the individual’s personal situation, but the L.G.B.T. community also has to remember authenticity in the I.C. is fundamental to doing national security and intelligence jobs,” Mr. Grenell said. “You don’t ever want to be in a position of hiding anything. That is how you can be compromised or blackmailed. So it is really important to be authentic, but to be authentic, people need to feel comfortable and safe.”

Until the 1980s, the government denied security clearances to gays, lesbians, bisexual and transgender people, under the belief that their sexual identity could be used to force them to give up secrets.

While those questions have been removed from security clearance questionnaires, Mr. Milk said that discrimination against gay, lesbian and transgender people persists in the intelligence agencies. Mr. Milk held a session last year at the Pentagon, where he spoke with people working for the National Security Agency, Defense Intelligence Agency and other agencies.