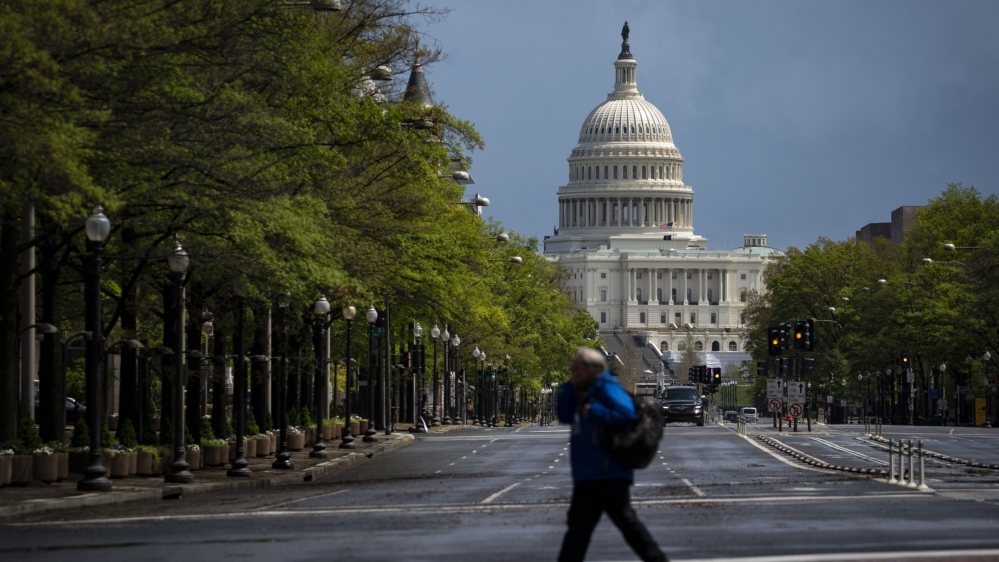 A pedestrian crosses a street near the United States Capitol in Washington, DC [File: Al Drago/Bloomberg]

Washington, DC – The United States Senate on Tuesday approved legislation worth $484bn to provide funding for a small business jobs programme, hospitals overrun by the coronavirus outbreak, and a national testing impetus to help tamp down the pandemic.

The Senate bill, agreed to in advance by the White House, allocates $25bn for a testing strategy that House Speaker Nancy Pelosi and other Democrats insisted was key to reopening the US economy. The bill calls on the Trump administration to define a strategy to provide nationwide testing and report on that plan to Congress.

The bill passed the Senate by unanimous consent and will now advance to the House of Representatives, which is expected to vote on it as soon as Thursday.

US House working on extra funds for hard-hit small businesses

US stocks slide 600 points on US oil price crash concerns

Trump calls for financial lifeline for struggling US oil industry

“There is a world economic contraction because of the virus and you are seeing demand just plunge,” Larry Kudlow, an economic adviser to US President Donald Trump, told reporters at the White House. “There is some deflation in the air.”

The emergency spending package adds approximately $320bn to a programme designed to help small businesses keep employees on their payrolls until the US economy can be reopened again. The money is in addition to the $350bn approved by Congress in March for small businesses under the so-called Paycheck Protection Program, which was quickly exhausted by overwhelming demand.

A portion of the new funding – $60bn – would be directed through community lenders to under-banked neighbourhoods and rural areas.

More than 22 million Americans have lost their jobs since the coronavirus pandemic forced businesses to shut down – the biggest job loss since the Great Depression between 1929 and 1933.

The bill includes $75bn for hospitals hit hardest by the coronavirus pandemic and $60bn for economic disaster assistance, as well as $11bn for states, according to a summary of the legislation.

The testing funds will be directed to “a national strategic testing policy that will focus on increasing testing capacity including testing supplies,” Pelosi and Senator Democratic leader Chuck Schumer said in a joint statement.

The availability of coronavirus testing has been a point of contention between the White House and state governors grappling with the pandemic.

More than four million tests have been administered in the US to date, with some 814,000 cases of COVID-19 – the disease caused by the novel coronavirus – thus far identified, according to data collected by Johns Hopkins University. Nearly 44,000 Americans have died from the disease.

Trump tweeted on Tuesday that he supported a negotiated agreement with Democrats and would sign the bill.

“I urge the Senate and House to pass the Paycheck Protection Program and Health Care Enhancement Act with additional funding for PPP [personal protective equipment], Hospitals and Testing,” the president said on Twitter, citing the full title of the bill and indicating he would sign the legislation.

Major US banks already have a pipeline of applications for the loans and grants, and are warning customers that not every qualified applicant would receive funds.

Terms of the new funding package were negotiated late into the night on Monday by Pelosi and Schumer with Trump’s representatives, Treasury Secretary Steven Mnuchin and White House Chief of Staff Mark Meadows.

Democrats had demanded more funding for small businesses that do not have established relationships with commercial banks. “If you don’t know a banker, you were left out,” Schumer said of the earlier programme.

In the negotiations, Republicans won more than the initial $250bn in additional funding for small businesses they had requested last week.

The legislation is the fourth bill Congress has passed to address the coronavirus outbreak. Before today’s bill, the US has committed more than $2.2 trillion in emergency spending, and Democrats and Republicans are already discussing funding priorities for a fifth bill.

The president tweeted on Tuesday that he wants to provide a financial lifeline for the US oil and gas industry.

We will never let the great U.S. Oil & Gas Industry down. I have instructed the Secretary of Energy and Secretary of the Treasury to formulate a plan which will make funds available so that these very important companies and jobs will be secured long into the future!

Democrats said they were “disappointed” that more funding was not included for states and cities whose budgets have been decimated by the economic slowdown, but said they were “pleased” Trump committed to addressing that need in the next round of legislation.

The next bill must be “transformative and far-reaching” and aimed at “getting Americans back to work” by “ensuring economic security” and “putting health and safety” first, Schumer and Pelosi said.

Schumer said the bill would need to be “similar in scope” to the $2.2 trillion measure previously passed by Congress.

Senator Rand Paul, a Republican, expressed concern that the massive new spending, which will be financed by government bond sales, will burden future generations with too much debt.

The US “can manage this disease without the draconian lockdown of the economy” and should quit “printing bailout cash”, Paul said in remarks to the Senate.