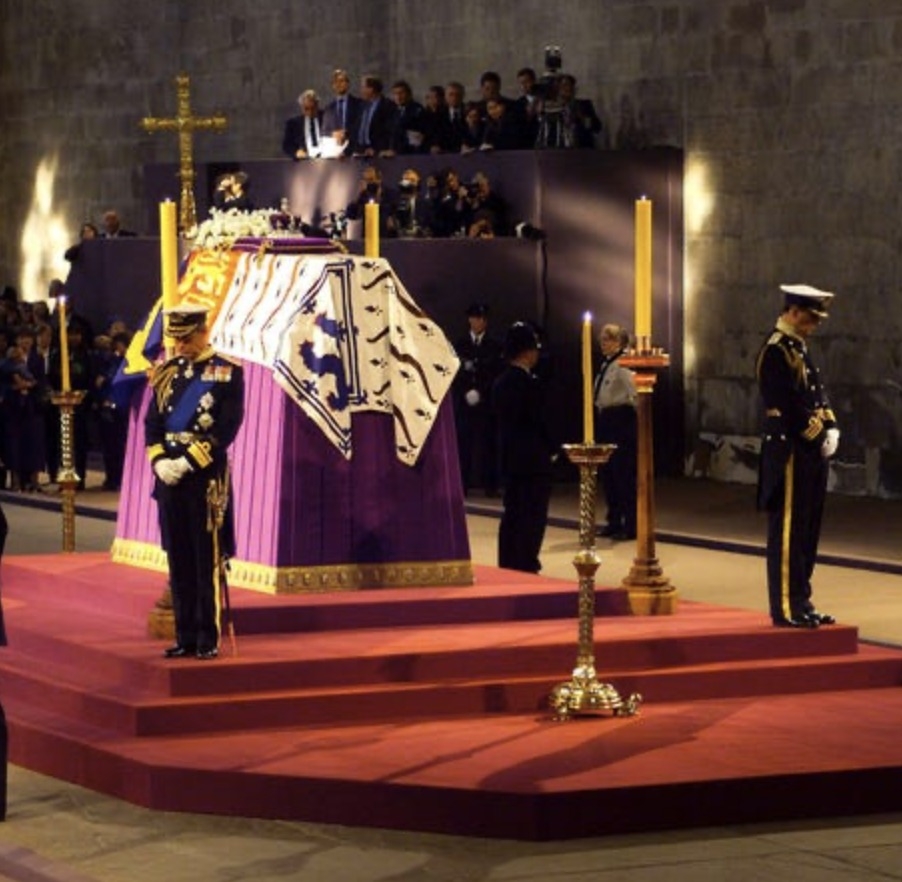 ~If I needed another reason to be anti-Permanent Emergency, it came with the death of the Duke of Edinburgh. The obsequies of great figures is one thing the British do better than anyone. The Vigil of the Princes, for example, is a “tradition” invented on the fly upon the death of George V and revived for the lying in state of the Queen Mum nineteen years ago: Her four grandsons, the Prince of Wales, the Duke of York, the Earl of Wessex and the then Viscount Linley, stood vigil at each corner of Her late Majesty’s catafalque – solemn, dignified and unpretentious. I would have liked something like that this time round, but under lockdown rules everyone other than George Floyd has his mourners reduced to barely detectable numbers.

~I regret that. But, insofar as I grasp the state of the world at a time when so much of it is unaccessible, there are two kinds of societies these days: The first are a few free-ish joints such as Florida and Estonia where life is almost passing for normal; the second is the rest of the “free” world, which remains burdened by constant micro-adjusted lockdown-without-end: You pull your left foot in, you stick a tentative toe out, you do the Hokey-Covid and you turn about; repeat until the end of time.

Looking at it from the state’s (or “science”‘s) point of view, the only remotely remaining justification for this as we approach the semi-anniversary of the arrival of the vaccines is that the government is using the containment of the people to expedite and accelerate mass immunization. Again, I emphasize I’m trying to see it from a benign official perspective: So, if you believe these bollocks “case numbers”, the United Kingdom’s vaccination programme has been a spectacular success, and a big thumbs-up for Brexit in contrast to the abysmal performance of the European Union. The Spectator today publishes a hit parade of how far “cases” have fallen from their mid-January peak:

Antibody levels in the UK are now at 55 per cent of the general population, and above 85 per cent for the over-65s, the most vulnerable demographic. Herd immunity is coming close to entirely eliminating the public health commissars’ preferred metric of “cases”. But even numbers more rooted in something proximate to reality are way down: on Sunday, for example, the UK reported just seven Covid deaths – versus over a thousand per day throughout January.

As I said, the “science” rationale for lockdown is: put up with the temporary prison state because it aids vaccinization and herd immunity, and then we can end the prison state. The worst countries are those who’ve imposed the most severe lockdowns, including nightly curfews, yet have made absolutely no progress in herd immunity. From that same Spectator hit parade of how “cases” have fallen from the January peak:

At Euro-Canadian rates, these countries are never coming out of lockdown. In my own demented Dominion, Justin Trudeau’s ministry is the biggest bunch of flop tosspots in the developed world: The gap between getting your first shot and the second is now up to four months – and I’ll bet it’s extended from there. For a year, western leaders have been selling a trade-off of the kind demonstrated in those UK numbers. In Canada and many parts of Europe, the trade-off has collapsed and is no longer remotely plausible.

As for Boris’s benighted land, the UK appears to be there: Will they now exit lockdown? Or will some other pretext for the Permanent Abnormal be found?

~One thing I didn’t get to Fox News Primetime on last week was the public implosion of another rock-ribbed conservative governor transitioning into a jelly-spined squish on national telly courtesy of dear old Tucker. I don’t know about you but my minimal qualification for a 2024 GOP candidate is someone willing to punch back against those who control the cultural levers of our society.

So the Kristi Noem bubble (which I never bought into) has burst, because she caved on the transgender sports issue – which, in vox populi terms, ought to be a no-brainer. Alas, in corrupt American political terms, it’s slightly more nuanced, because the national media will destroy you for it. So Governor Noem is “courageous” on lockdown, because her business donors want restrictions lifted so they can make money again. But the same Governor Noem is a gutless nothing on the most obvious and misogynist trans-fanaticism because all the woke and passing-for-woke biz donors don’t want anything to do with anyone who goes anywhere near it.

So she’s done as a national figure, because her cowardice has made her insufficient for the times.

Even more pathetic was Arkansas governor Asa Hutchinson, whom I haven’t thought about in two decades since I had a brief word with him at the Clinton impeachment trial. On Fox last week, Hutchinson was insisting to Tucker that the real conservative position was chemical castration for children, all the while squirming as if some docs under the table were performing it on him right there and then. Hutchinson denied having taken his orders from Wal-Mart and other corporate donors on the trans thing, but this appears to be not true.

So we are now at the stage where it is politically unfeasible for prominent “conservatives” to resist the left’s abolition of biological sex. Urgency and courage are in very short supply on the American right. If conservatism means speaking loudly and carrying a small twig, these guys are doing a grand job.

~It was a very busy weekend at SteynOnline, beginning with the Friday edition of Fox News Primetime, covering everything from the comparative merits of monarchy and unkept republics to the execrable John Boehner’s slur of Michele Bachmann (who’ll be my shipmate on the Third Annual Mark Steyn Cruise). On Saturday, we continued our audio serialization of Mark Steyn’s Passing Parade with motorcycle stunt maestro Evel Knievel and Tonight Show host Jack Paar, while our weekend movie date offered three cinematic thoughts on the Duke of Edinburgh. Our marquee presentation was the latest of my Sunday video poems – The Last of the Books by Alfred Noyes. And we rounded out the weekend with a Sunday song selection from the spectacular catalogue of a chap whose name you surely do not know.

If you were too busy demanding Tucker be fired all weekend long, I hope you’ll want to check out one or three of the foregoing as a new week begins.

Steyn’s Sunday Poem and Mark Steyn’s Passing Parade are made with the support of members of The Mark Steyn Club. You can find more details about our Club here – and we also have a great gift membership.

What about Liz Cheney?

You Can Get a Man with a Gun