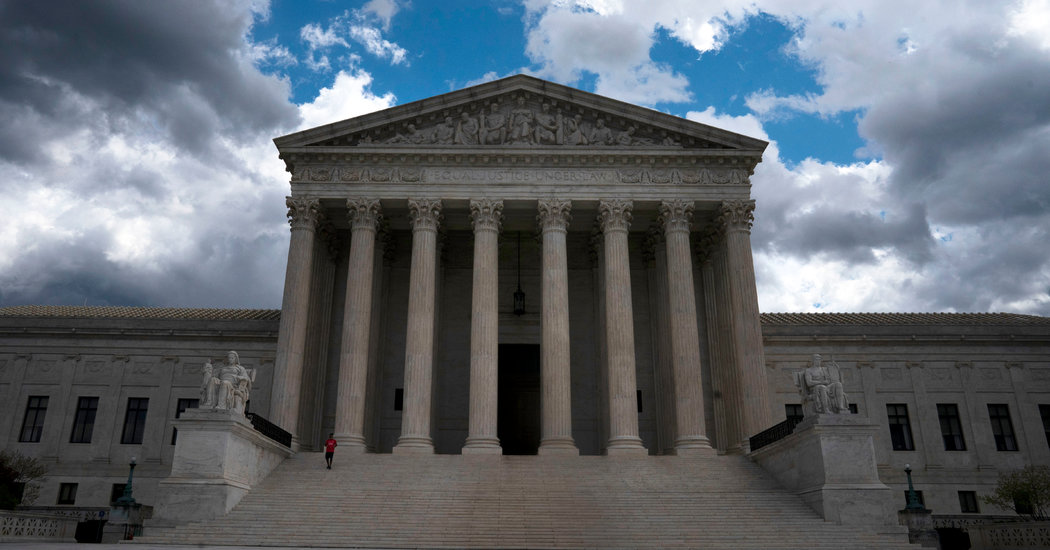 WASHINGTON — A few months ago, a coalition of news organizations asked the Supreme Court to allow live audio coverage of major arguments on gay rights and immigration. Chief Justice John G. Roberts Jr. rejected the request within hours, in keeping with longstanding practice at an institution that almost never departs from tradition.

But on Monday, the court will break with history twice: hearing the first of 10 cases that will be argued in a telephone conference call, and letting the public listen in. It is a momentous step for a cautious and secretive institution and yet another way in which the coronavirus pandemic has forced American society to adjust to a new reality.

“It’s a remarkable development and completely unexpected,” said Bruce Collins, the general counsel of C-SPAN, which will offer live coverage of the arguments.

Among the cases the justices will hear by phone over the next two weeks are three on May 12 about subpoenas from prosecutors and Congress seeking President Trump’s financial records, which could yield a politically explosive decision this summer as the presidential campaign enters high gear.

The court has never before heard a case by phone, a move that some lawyers fear will degrade the quality of the arguments and the spirited give-and-take of the courtroom. Nor has it allowed live audio coverage of its arguments, on rare occasions releasing same-day audio, but usually waiting until the end of the week to do so.

Now that those barriers have been broken, the question is whether at least some of the changes may last far beyond the coming two weeks.

The justices may not return to the bench in October if the virus is still a threat, as several of them are in the demographic group thought to be most at risk. Justice Ruth Bader Ginsburg is 87, and Justice Stephen G. Breyer is 81. Four additional members of the court — Chief Justice Roberts and Justices Clarence Thomas, Samuel A. Alito Jr. and Sonia Sotomayor — are 65 or older.

Courts around the nation and the world routinely allow not only audio but camera coverage of their arguments.

The justices have offered various explanations for their resistance to live access to their work. Some have said they feared showboating from the lawyers. Others have worried that their questions, some including colorful hypotheticals, would be taken out of context.

Justice Sotomayor has said she feared the public would not understand the arguments. “I don’t think most viewers take the time to actually delve into either the briefs or the legal arguments to appreciate what the court is doing,” she said in 2013.

Lawyers who argue before the court and experts on its history and procedures said that arguments conducted by telephone are likely to be more stilted and less valuable than ones in the courtroom.

“It’s better than nothing, but it’s no substitute for the real thing,” said Kannon K. Shanmugam, an experienced Supreme Court lawyer with Paul, Weiss, Rifkind, Wharton & Garrison. “It’s hard to have the back-and-forth that you have in open court. And it’s that much harder without videoconferencing, where you can at least see each other.”

Instead of the unruly but productive commotion that characterizes the modern Supreme Court argument, the court has announced that the justices will ask questions one by one, in order of seniority.

That seemingly small adjustment will have important consequences, notably in diminishing the ability of the justices to use their questions to talk to one another by jumping in to build on or respond to their colleagues’ concerns. The court will mute the lines of lawyers before and after they argue, but it has not said whether or how the justices themselves will be muted when it is not their turn to ask questions.

Other courts that have heard arguments by conference call have experienced hiccups, including dropped calls and background noise. The Supreme Court is unlikely to be immune to such glitches.

Even if the technical aspects of the arguments are seamless, the new format will impose problematic constraints.

“The justices will find these arguments materially less useful,” said Tom Goldstein, a lawyer who argues frequently before the court and is the publisher of Scotusblog.

Chief Justice Roberts, who was an accomplished Supreme Court lawyer before he took the bench, has explained that oral arguments are largely a way for justices to begin their deliberations.

“Quite often the judges are debating among themselves and just using the lawyers as a backboard,” he told students at Columbia Law School in 2008.

Those interactions will largely disappear in the new format, which may take on the disjointed quality of questioning at a congressional hearing.

Lawyers may also lose the ability to respond to a hostile question by pivoting to a different point in the hope of engaging a more friendly justice.

Indeed, the court has issued new instructions to the lawyers who will be arguing by phone. “Please be concise and responsive to each question so that each justice will have adequate time for questioning,” Scott Harris, the clerk of the Supreme Court, wrote to the lawyers.

It is hardly clear that there will be enough time even so. When the United States Court of Appeals for the District of Columbia Circuit adopted one-by-one questioning in recent cases heard by nine judges by teleconference, the session lasted for hours. The Supreme Court, by contrast, has in the past tried very hard to keep most arguments to an hour.

In the ordinary Supreme Court argument, most justices ask questions largely or solely of the lawyer for the side they will vote against.

In remarks in 2004 to the Supreme Court Historical Society, Chief Justice Roberts, then an appeals court judge, made a playful point grounded in widely accepted statistics: “The secret to successful advocacy is simply to get the court to ask your opponent more questions.”

But the forced march of serial questions is likely to put pressure on the justices to ask questions of both sides, whether they would ordinarily be inclined to or not. (The exception may be Justice Thomas, who very seldom asks questions of either side.)

“When your side is up, instead of remaining silent you’re going to be handed the microphone,” said Irv Gornstein, the executive director of Georgetown’s Supreme Court Institute. “Are you going to use that opportunity to throw softballs? I don’t know.”

The institute, which has a widely admired moot court program that lets lawyers test-drive their arguments before appearing in front of the justices, has a new menu of options.

Roman Martinez, a lawyer with Latham & Watkins who is getting ready to argue a First Amendment case on Wednesday, said he had doubled his usual number of moot courts, from two to four. “What I’ve been trying to do is to set up the moot courts to mirror, as best as possible, what the real-life argument experience will be like,” he said.

That means arguing from his office, alone, sitting in front of a fancy new speakerphone bought for the occasion. He is not planning to wear a suit. (The court has not said whether the justices will be wearing robes, though it seems unlikely.)

“I think an argument like this can be extraordinarily substantive and can be very helpful to the justices even though it’s not in person,” Mr. Martinez said. “It’s a second-best solution. Obviously, we would all prefer to be there live in person.”

There are some advantages. It will be possible to consult with colleagues, though that may be distracting.

“It does make it easier to look down at notes or look at particular, say, statutory language,” Mr. Martinez said. “But on balance, that minor advantage is outweighed by the disadvantage of not being able to see the justices.”

The court’s initial reaction to the pandemic was to postpone some 20 arguments that had been scheduled for March and April, ordinarily the last sittings of the term. Last month, it announced it would hear half of them in May and defer the rest to its next term, starting in October.

Scheduling arguments for May means that the court may not finish its work by late June, when its term ordinarily ends and the justices leave for their summer break.

Monday’s argument is a sort of dry run, concerning as it does a minor trademark dispute. But other cases to be argued in the next two weeks are important.

In addition to the cases on Mr. Trump’s financial records, a major test of presidential power, the court will hear arguments on whether members of the Electoral College may cast their votes for presidential candidates other than the ones they had pledged to support.

There will still be elements of ceremony in the telephone arguments, some of them a little comic. “At 10 a.m.,” a news release describing the court’s new procedures said, “the justices will enter the main conference call.”