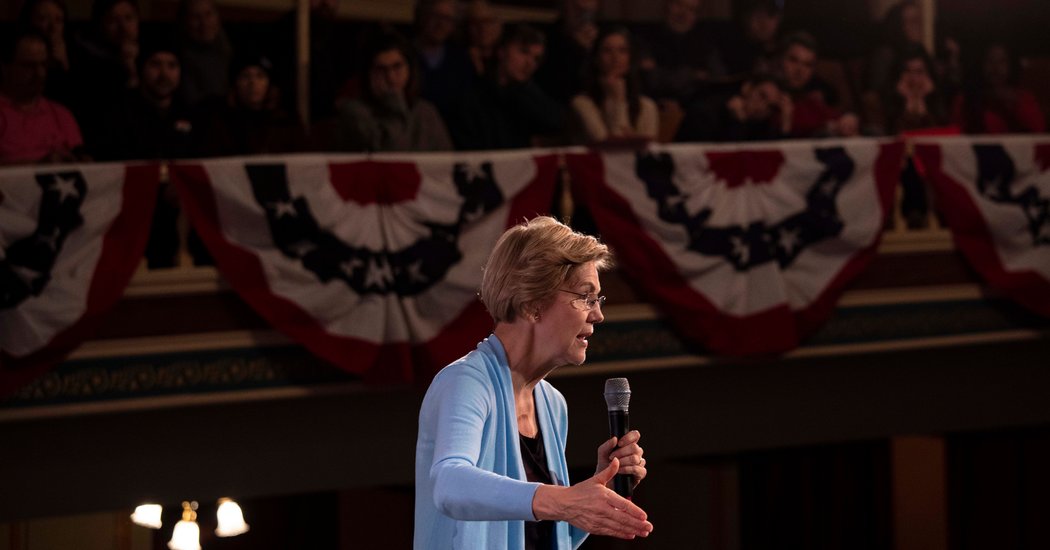 MANCHESTER, N.H. — In a lengthy Election Day memo outlining their path forward in the fractured Democratic primary, Elizabeth Warren’s campaign manager drew the sharpest contrasts to date with her leading rivals, arguing that Bernie Sanders has a political “ceiling,” Joseph R. Biden Jr. is at risk of having his support collapse and that Pete Buttigieg will struggle as the primary moves on to more diverse states.

The nearly 2,000-word memo describes a “volatile and unpredictable” 2020 race that they expect to remain muddled through Super Tuesday in early March and outlines her path despite a disappointing third-place finish in Iowa and as allies brace for that or worse in New Hampshire on Tuesday.

“Warren has proven the doubters wrong before,” wrote Roger Lau, Ms. Warren’s campaign manager, in the memo provided to The New York Times and sent to supporters and staff on Tuesday afternoon.

Mr. Lau sought to reassure supporters that the campaign is undeterred by state-by-state results, including later on Tuesday.

“The road to the Democratic nomination is not paved with statewide winner-take-all victories,” Mr. Lau wrote, adding, “This is a district-by-district contest for pledged delegates awarded proportionally.”

There is a long history of candidates who lose the early states in the presidential nominating calendar predicting comebacks that never materialize. Ms. Warren, the Massachusetts senator, is trying to regain momentum after rising in the polls during the summer and early fall but sliding back over the recent months.

While the race is ultimately a delegate contest, momentum and money delivered by initial victories can prove decisive. That is one reason Ms. Warren was the earliest and biggest investor in staff in both Iowa and New Hampshire, hoping success there would propel her forward.

“The process won’t be decided by the simple horse race numbers in clickbait headlines,” Mr. Lau added. “That’s never been our focus — our focus is on building a broad coalition to win delegates everywhere.”

Mr. Lau argued no candidate has shown an ability to coalesce the party behind them and he predicted that Ms. Warren, who has been pitching herself as the “unity” candidate for weeks, would prove “the consensus choice of the widest coalition of Democrats in every corner of the country” by March 3, Super Tuesday.

The memo provides, by far, the most detailed projections released by any campaign of delegate viability heading into Super Tuesday, predicting a “three-way race” between herself, Mr. Biden, the former vice president and Mr. Sanders, the Vermont senator. She omits Mr. Buttigieg, the former mayor of South Bend, Ind., even though he received more support than her in Iowa and could do so again in New Hampshire. Candidates need to reach 15 percent support in each congressional district to win delegates, as well as statewide for statewide delegates.

“If the early states deliver mixed results for the field, and no seismic event shakes up the top three, the remaining viable candidates for the Democratic nomination as of Super Tuesday will be Joe Biden, Bernie Sanders, and Elizabeth Warren,” the memo predicts.

Of Mr. Buttigieg, the memo says, “Despite being in the race for a year and effectively tied for second in Iowa, Pete Buttigieg fails to break the 15 percent threshold in any of the Super Tuesday states and is in danger of getting locked out of critical statewide delegates entirely.”

The memo goes on to foresee struggles for Mr. Buttigieg in more diverse states: “He still hasn’t answered tough questions about his record in South Bend.”

The Warren memo said their “internal projections” show that of the 165 congressional districts that will vote on Super Tuesday, Mr. Sanders and Mr. Biden would currently finish above the 15 percent threshold in 98 percent and 96 percent of them, respectively.

Ms. Warren is above that delegate threshold in 65 percent of the districts, the next most.

There is then a big drop-off to Mr. Bloomberg (delegate-eligible in 15 percent of districts), Mr. Buttigieg (6 percent), and Senator Amy Klobuchar (5 percent, which is entirely in her home state of Minnesota), according to the projections.

“Warren is poised to finish in the top two in over half of Super Tuesday states (eight of 14), in the top three in all of them, and is on pace to pick up at-large statewide delegates in all but one,” the memo said.

Ms. Warren’s campaign also highlighted the eroding standing of Mr. Biden — who announced Tuesday he was leaving New Hampshire before the votes would be counted and heading to South Carolina —  in polls.

“Biden entered this race as the clear front-runner, reaching over 40 percent in national polling last spring. He’s now polling under 30 percent even among older voters and African-American voters, who have been his strongest supporters, and his support among younger voters has fallen to just 6 percent,” the memo said.

Following a well-reviewed Friday debate performance, Ms. Klobuchar has climbed in some New Hampshire tracking polls and drawn her largest crowds of the race. The Warren memo says she is “getting a well-deserved look” for the first time, but adds, “She hasn’t yet faced the tough questions and scrutiny that accompany rising momentum.”

One of the few rivals that Ms. Warren has been previously willing to call out by name is Michael R. Bloomberg, the billionaire former mayor of New York City, who has spent hundreds of millions of dollars of his personal fortune in advertising in the states that will vote in March and beyond. “Bloomberg will soon be forced to actually debate his record, rather than hiding behind millions in TV ads,” the memo said.

Until now, Ms. Warren has been especially cautious when it comes to criticizing Mr. Sanders, her chief rival for progressive support, who finished atop the race in Iowa and has seized the lead in some national polls as Mr. Biden has faltered.

“Senator Sanders starts with a ceiling that’s significantly lower than the support he had four years ago,” the memo said. “In Iowa, Sanders got no more than half the number of people who caucused for him last time, despite spending $11.2 million in the state on TV ads — a third more than he spent in 2016.”

Mr. Lau predicted more attention on Mr. Sanders going forward, too: “He hasn’t yet faced the scrutiny of his record that will surely come with any further rise.”

The memo was a stark departure from Ms. Warren’s posture on the trail in recent days as she has constantly ducked opportunities to create stark contrasts with rivals. On Monday, when asked why she has stayed away from direct attacks, Ms. Warren had said she has chosen to make those contrasts through policy.

“I talk about policy — come on. I talk policy. I get questions about process — and I still talk about policy,” Ms. Warren said. “I have laid out what my policies are and they’re not the same as everyone else’s.”