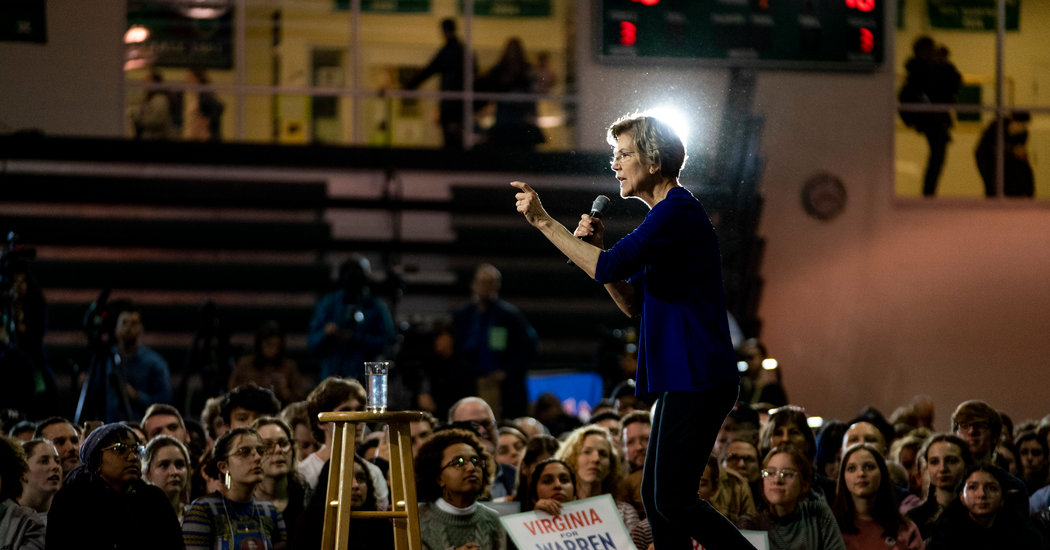 ARLINGTON, Va. — Senator Elizabeth Warren of Massachusetts said Thursday that Michael R. Bloomberg should not be the Democratic presidential nominee because of newly surfaced comments he made 12 years ago in which he said the end of a discriminatory housing practice had helped contribute to the 2008 financial crisis.

Ms. Warren’s comments, made at an event here in Northern Virginia, were a strikingly direct broadside against a rival as she tries to reignite enthusiasm for her campaign after her fourth-place finish in New Hampshire this week.

“A video just came out yesterday in which Michael Bloomberg is saying, in effect, that the 2008 financial crash was caused because the banks weren’t permitted to discriminate against black and brown people,” Ms. Warren told a crowd of supporters packed into a high school gymnasium. “That crisis would not have been averted if the banks had been able to be bigger racists. And anyone who thinks that should not be the leader of our party.”

The comments were a strategic shift for the Massachusetts senator, who has typically tried to stay above the attacks and counterattacks traded by many of her rivals. On Tuesday evening in New Hampshire, she had criticized the aggression shown by some of the other candidates, urging them to forgo “harsh tactics.”

Two days later, after speculation over how long she could remain in the race, she slammed Mr. Bloomberg, the self-funding billionaire and former mayor of New York City, whose record on racial issues has increasingly been called into question. He faced criticism on Thursday after his comments about the housing practice, which is known as redlining and discriminates against people of color, were reported by The Associated Press a day earlier.

The Massachusetts senator also resurfaced her evergreen critique of Mr. Bloomberg on Thursday in Virginia, one of 15 states and territories that hold presidential nominating contests as part of Super Tuesday on March 3.

“This has been some presidential primary already,” she said. “We’ve been going at this for about a year. Some people got in a little later than others. Michael Bloomberg came in on the billionaire plan — just buy yourself the nomination.”

Ms. Warren’s campaign said on Thursday that it had raised $1 million since issuing a plea on Wednesday night to raise $7 million before the Nevada caucuses.

Her sizable fund-raising goal raises questions about whether her campaign has enough money to sustain her operations past Super Tuesday. Ms. Warren hired more quickly than many of her opponents, leaving her to foot the bill for a large operation earlier in the race.

Unlike for some of her rivals, Ms. Warren’s finish in New Hampshire did not lead to a cash infusion. Senator Amy Klobuchar of Minnesota raised $5 million on Wednesday alone, hosting a fund-raiser in New York City the day after she beat expectations with a third-place finish in New Hampshire and thrust the term “Klomentum” so far into the mainstream that it now has its own Wikipedia entry.

Ms. Warren has canceled $252,000 worth of television advertising planned for South Carolina — everything she had reserved in the state after Sunday. Her campaign will spend nearly $320,000 in TV time for the final two weeks of the Nevada contest, less than half of what Senator Bernie Sanders of Vermont or Pete Buttigieg, the former mayor of South Bend, Ind., have invested on the state’s airwaves in that time, according to data from Advertising Analytics.

The attacks on Mr. Bloomberg seemed designed to generate excitement among Ms. Warren’s supporters and Democrats who are wary of giving a billionaire the nomination.

Earlier on Thursday, Ms. Warren released a video on Twitter, ostensibly about her plan to address housing, with the caption: “Here’s a history lesson on the racist legacy of redlining, if any presidential candidate needs a refresher.”

Ms. Warren has often performed best in the 2020 campaign when calling out Democratic boogeymen. Following an early slump, she first began rising in the polls after she called for President Trump’s impeachment in April. Her proposed wealth tax on fortunes greater than $50 million has become the campaign’s signature, with some supporters attending events dressed as two pennies to signify how much on the dollar the wealth tax would collect.

But her criticisms of Democratic rivals have largely been limited to their high-dollar fund-raising or coziness with corporations. She blasted Mr. Buttigieg for hobnobbing with donors at a California wine cave and said that “Joe Biden was on the side of the credit card companies.”

He is the archetype of the plutocrat she has criticized for years. She has focused particularly on his status as a self-funding candidate and his opposition to her proposed wealth tax.

Her campaign’s website features a wealth tax calculator to show how much billionaires who have publicly complained about her proposal would have to pay. Mr. Bloomberg’s tab would be $3.16 billion next year.

Ms. Warren has sufficient funds to get through Nevada, South Carolina’s Feb. 29 primary and Super Tuesday, but with campaign staff deployed to 31 states, her campaign will require a healthy flow of new contributions to remain afloat.

In a memo sent to supporters and reporters hours before the New Hampshire polls closed, Ms. Warren’s campaign manager, Roger Lau, framed the Super Tuesday states as a three-way contest between Ms. Warren, Mr. Sanders and former Vice President Joseph R. Biden Jr. No one else, Mr. Lau wrote, is above the 15 percent threshold to collect delegates in more than a quarter of the 165 congressional districts at stake on Super Tuesday.

But that optimism, based on unspecific internal projections, discounts the momentum and invaluable news coverage that come from delivering strong finishes in the early states — something Mr. Buttigieg and Mr. Sanders have done.

“I need to level with you,” Ms. Warren said in a video and recorded phone call her campaign texted to supporters on Wednesday night. “Our movement needs critical funds so I can remain competitive in this race through Super Tuesday. A third of delegates don’t get decided until Super Tuesday, so what we do now matters more than ever.”