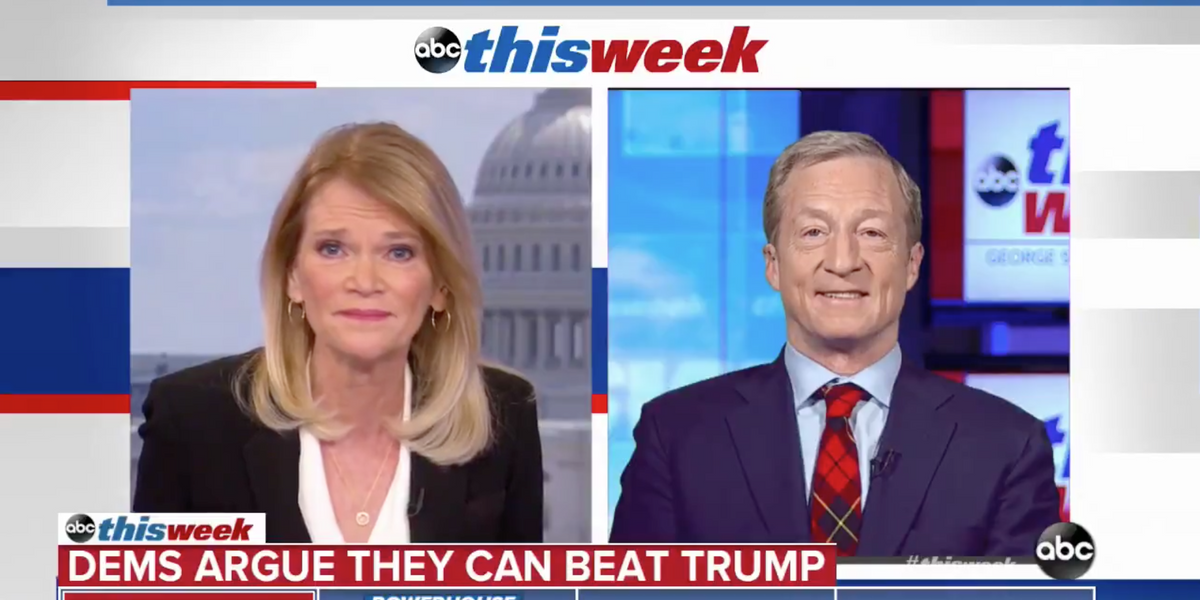 For someone who has spent $200 million running for president, Tom Steyer can’t seem to catch a break.

Steyer has come in seventh and sixth place in Iowa and New Hampshire, respectively, and the raison d’être of his campaign — namely, that he can go toe-to-toe with President Donald Trump as a fellow businessman — has little appeal among voters who are generally satisfied with the state of the American economy.

Seventy percent say the economy is doing well under Trump

In an interview on ABC News’ “This Week,” host Martha Raddatz shred Steyer’s candidacy with a single question:

Mr. Steyer, you say that you can take on Donald Trump on the economy, but the latest Quinnipiac national poll again released just this week says 70 percent of voters describe the nation’s economy as excellent or good. So how do you convince them that a change is needed when they think they’re doing so well under Donald Trump?

Steyer seemed stunned by the question.

After an awkward pause, the billionaire environmental activist said, “I think if you take a look at what he says, everything he says superficially sounds right, but is actually a lie,” followed by a series of misleading claims about the gap between the rich and poor.

Raddatz was having none of it and cut-off Steyer in the middle of his soliloquy.

“But I want to go back to that 70 percent number. You talk about the wealthy. They’re not all wealthy people. Seventy-percent say the economy is good and they’re doing well,” she said.

Steyer accuses the reporter of being pro-Trump

Steyer, again, was at a loss for words and rather than responding to the question, proceeded to attack Raddatz by accusing her of parroting Trump campaign talking points. “Well, I’m just saying, here we are on a show and you’re standing up for Mr. Trump’s version of the economy. And I’m telling you…”

At that point, Steyer came undone and returned to his claim about there being two different economies.

As of the writing of this story, Steyer stands at slightly less than 2 percent in national polls, according to the RealClearPolitics average. That means he has spent $100,000,000 per percentage point in national polling. That’s a lot of money for someone who claims to be an expert on economic issues.