Stagflation’s back, baby — in Europe, anyway, according to Janet Yellen. The Treasury Secretary warned that high energy and food prices are no longer “transitory,” no longer “Putin’s tax hike,” and no longer evidence of robust growth. Nope, Yellen warned, this looks like That 70s Show all over again, only without disco and leisure suits.

We can skip the leisure suits, of course:

Treasury Secretary Janet L. Yellen said on Wednesday that Americans should not expect immediate relief from high gas prices but maintained that increases in global supply are eventually likely to provide long-term relief for motorists at the pump.

Yellen also warned of the potential for slower growth to combine with inflation worldwide: “Higher food and energy prices are having stagflationary effects, namely depressing output and spending and raising inflation all around the world,” she told reporters.

“We’re doing what we can to avoid further increases in energy prices … but we also want to make sure” Europe weans itself off dependence on reliance on Russian oil and gas, Yellen said. She added: “These pressures are not likely to abate in the very near future.”

Yellen also said that the US could resist these “stagflationary effects” for now, but that they could be a risk in the US as well eventually:

Ms. Yellen suggested that the United States was well placed to withstand the turbulence, pointing to America’s strong labor market and healthy household finances. But she warned that Europe could be more vulnerable to a recession because of its dependence on Russian energy, as well other factors that are weighing on global growth, including severe lockdowns in China to contain coronavirus outbreaks that are compounding supply chain problems.

“This is an environment that is filled with risks, both with respect to inflation, and also potential slowdowns,” Ms. Yellen said.

It’s unclear why Yellen sees that much of a difference between Europe and the US. The rate of EU inflation had been more stable than that in the US over the past 15 months, and still hasn’t hit as high as current CPI and PPI inflation rates here: 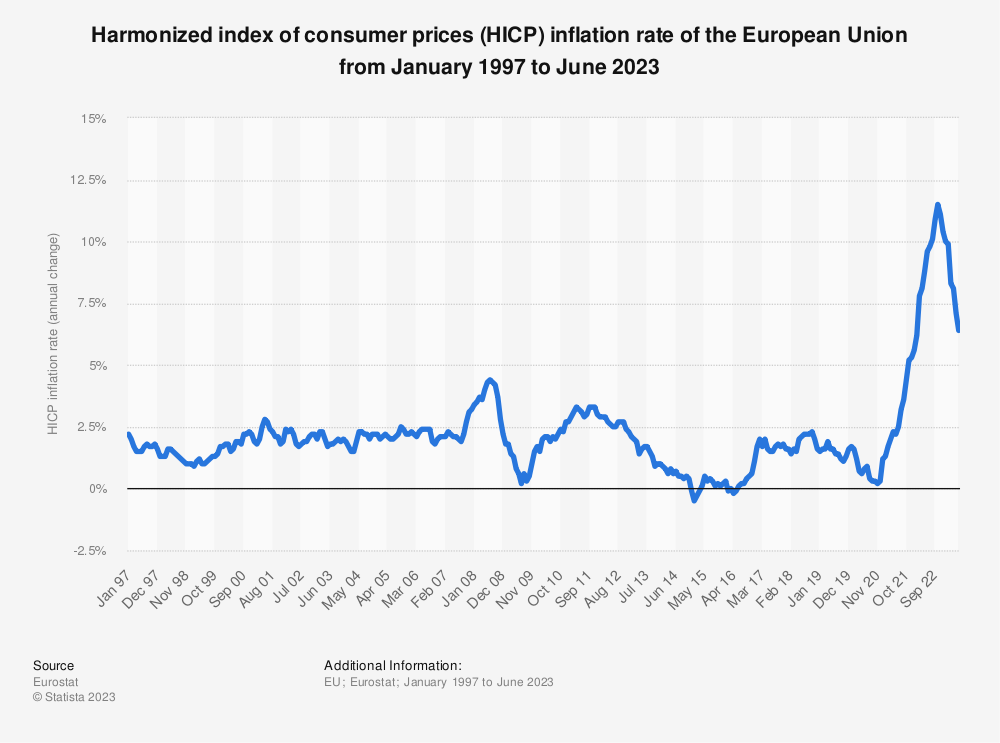 The HCIP is the analog to our CPI measurement. Inflation in the Eurozone didn’t get above 4% until October 2021, and didn’t get above 6% until Vladimir Putin’s invasion of Ukraine. (This data is zoomable at the link.) Just to remind everyone, our CPI inflation rate began spiking months earlier, as did our energy prices and grocery-staple shortages:

If energy price spikes and inflation in general have a suppressive effect on output, higher interest rates from the Federal Reserve will magnify it. The Fed doesn’t have any choice but to keep hiking interest rates with both CPI and PPI on this trajectory, as this level of inflation has already negated any wage gains for American workers and has eroded even their core buying power. That will eventually have a dampening effect on consumption, although last month’s retail sales figures show that hasn’t happened yet. When the Fed keeps hiking those interest rates, tightening the money supply for everything including home mortgages and business investments, we’re likely to tip over into full stagflation — if not recession.

And make no mistake about it, Business Insider reported yesterday, our energy prices will continue escalating under current policies and economic conditions. In fact, inflation may start escalating even faster:

XLE is a basket or portfolio of dozens of energy companies. These companies typically have large holdings of oil and/or natural gas. As the prices of these commodities move higher, the value of the companies’ stocks increases and this pushes them into rally mode.

As you can see on the following long-term chart, the $78 level has been resistance for XLE since December 2015. But now that resistance appears to have been broken.

This could be telling us something important, and it isn’t good. The move higher in inflation may just be getting started.

In other words, our own combination of soaring energy prices and falling household buying power will likely lead us to stagflation, too. We may be further along that path than Europe is, especially when looking at the 2022Q1 GDP report that showed a -1.4% retreat in the US economy. That was mainly technical — a sharp drop in exports and massive consumption of imports — but the fundamentals otherwise were still underwhelming after accounting for inflation.

So why isn’t this like the 1970s? Yellen offered a laughable explanation to CNN:

“In the 1970s, a series of supply shocks became a longer run problem … that partly occurred because policy makers weren’t trusted by the public to deal effectively with inflation,” Yellen said during an interview with Bianna Golodryga for “Amanpour,” set to air Wednesday at 2 pm ET on CNN International. “But I certainly see no evidence that that’s the case now,” the Treasury Secretary added.

Ahem. The RCP aggregate for Joe Biden’s approval rating on the economy is currently 36.5/59.4, and that’s only that high because the perpetual outliers provided by YouGov are holding up that average. The last time any pollster other than YouGov put Biden’s approval deficit in single digits was an NPR/PBS poll immediately after Biden’s State of the Union address in March (-8), and six weeks later it returned to a -17 gap. Prior to that, Politico’s December poll had Biden at -9.

That’s not the only absurdity on display today, though. Guess who’s now unhappy that the Fed isn’t shrinking the money supply fast enough? Ben Bernanke is also raising the alarm on stagflation in the US and scolding the Fed over its incremental approach:

Former US Federal Reserve chairman Ben Bernanke said the central bank’s current leaders were too slow to react to surging US inflation and, as a result, faces a period of stagflation — a combination of stagnant growth and high inflation.

“The forward guidance, I think overall, on the margin, slowed the response of the Fed to the inflation problem,” Bernanke said in an interview broadcast on CNBC on Monday. “I think, in retrospect, yes, it was a mistake and I think they agree it was a mistake.”

Bernanke ought to know. He’s the architect of the monetary-supply policies that created the environment for 1970s-style inflation and economic stagnation. Now we’ve seen everything, except the bell bottoms and Whip Inflation Now buttons.